March 7, 2016 | Now at your local mall: Nanotechnology for the masses 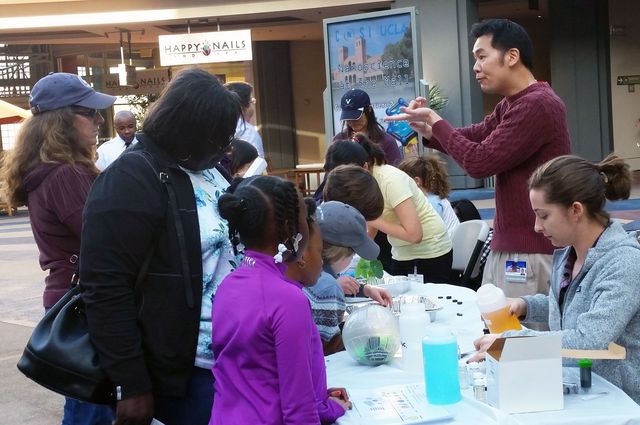 Jia Chen, education director at the California NanoSystems Institute at UCLA, explains to a crowd of bystanders at the Promenade mall that atoms, while very small, can form large objects in a variety of shapes. Graduate student Pascal Krotee pours out a solution to demonstrate how water can be purified by using a filter made from nanomaterials. (Image courtesy of Shaun Mason/UCLA)

A precocious 6-year-old, Spencer Reisner already has an ambitious “to do” list for his future: become an astronaut and go to Mars, create new fuel sources and learn more about nanotechnology. Recently, he achieved one of these lifelong objectives at an unlikely venue: an L.A. shopping mall.

On Feb. 20, the Promenade at Howard Hughes Center became more than just a shopping bazaar for kids and parents looking to buy the latest cool sneakers. Volunteer scientists, graduate students and staff from the California NanoSystems Institute (CNSI) at UCLA set up a booth there to demystify nanoscience in fun ways. It’s a tough subject that’s not well understood by the general public, isn’t even in the Merriam-Webster Dictionary yet and may even sound a bit scary to them.

But not to Spencer. He seemed to take in every word and eagerly participated in simple tabletop demonstrations of nanoscience in action with Jia Chen, education director at the institute. “My favorite things were how fiber optics work and how things repel water,” said the boy after getting his picture taken wearing a white lab coat and protective goggles like a real scientist. “I want to go to UCLA!”

“This is 10 times greater than we thought it would be,” said Spencer’s mother, Frankie Drayus Reisner, of the event. She was especially impressed by the way the UCLA scientists answered basic questions without making people feel foolish or stupid. During the three hours the booth was open, crowds of adults and children gathered around to assemble mock atomic and molecular structures, experiment with water-repellant surfaces and learn about the ubiquitous impact nanoscience has on their daily lives in ways they never realized before.

Nanoscience at the Mall, a UCLA project funded by the American Physical Society, was an idea that came to Chen and his colleague Sarah Tolbert, professor and faculty director of CNSI outreach, after they found out that the average American visits a shopping mall for four hours weekly. That’s enough time, they figured, to engage shoppers in a fun conversation about nanoscience, the study of materials on an atomic or molecular scale.

Just the experience of meeting a genuine nanoscientist in a neighborhood shopping mall helps make this science seem less remote and less esoteric. “People aren’t expecting to encounter UCLA nanoscientists at the mall,” Chen said. Offering the public a convenient new venue where they can talk to a working scientist and recognize how science is relevant to their personal lives is a prime goal of the program, Chen explained.

He observed how people respond to this. “They are immediately fascinated by the fun atmosphere and become comfortable enough to dive right in with questions and comments,“ he said. “They quickly learn what ‘nano’ means (one-billionth part of something) and how it impacts their lives. And they can have a conversation over coffee with the scientists who make these discoveries.

“We hope this leads to a greater curiosity and greater understanding of nanoscience, its benefits to society and why supporting its advancement is important,” he said.

While CNSI also has educational programs geared to connect with middle and high school students and teachers, reaching the adult population, whose opinions could have a much greater influence on public policy, is more difficult. So to test the effectiveness of the mall booth as a learning tool, shoppers who stopped by, like Stephen Schieneman, were asked to answer questions on an e-tablet.

“I learned something about nanoscience today,” said Schieneman, a Scout master and fifth-grade teacher who brought his Cub Scout troop to the booth after learning about it in a local newspaper. “It was interesting finding out there were so many nanotechnologies already on the market and out in the environment.”

If you’re interested in learning more about the subject, the UCLA nanoscientists are planning to be at the Westfield Culver City Mall on Saturday, April 2, from 1-4 p.m. They will be back at the Promenade April 16 and May 21 from 3-6 p.m.