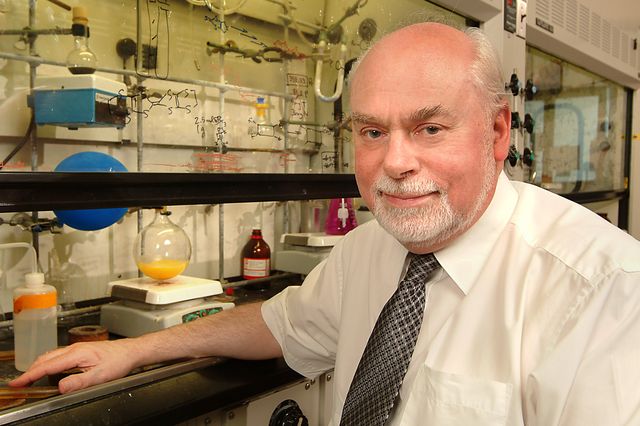 Stoddart, pictured in his lab at UCLA, was honored for his 1991 development of a “rotaxane,” a structure in which a molecular ring is threaded onto a thin molecular axle.

J. Fraser Stoddart, who was a professor of chemistry and biochemistry at UCLA from 1997 to 2008 and is currently the Board of Trustees Professor of Chemistry at Northwestern University, has been awarded the 2016 Nobel Prize in chemistry, the Nobel committee announced this morning.

Stoddart shared the award with Jean-Pierre Sauvage of the University of Strasbourg in France and Bernard Feringa of the University of Groningen in the Netherlands. The Nobel committee lauded them for taking “molecular systems out of equilibrium’s stalemate and into energy-filled states in which their movements can be controlled.”

In particular, Stoddart was recognized for his 1991 development of a “rotaxane,” a structure in which a molecular ring is threaded onto a thin molecular axle, and for demonstrating that the ring could move along the axle. That achievement led to innovations such as a molecular lift, a molecular muscle and a molecule-based computer chip.

“Fraser Stoddart is one of the world’s most innovative organic chemists, and he richly deserves this high honor,” said Professor Catherine Clarke, chair of UCLA’s department of chemistry and biochemistry. “For more than four decades, his research has consistently defined the frontier of science and innovation in his field.”

Stoddart’s areas of expertise include molecular electronics and artificial molecular machines. The former involves the use of molecules on the nanoscale as switches in computers and other electronic devices, while the latter uses linear motor-molecules in nanochemomechanical and nanoelectromechanical systems. His research is performed on a scale ranging from a nanometer — 1 billionth of a meter — to a few hundred nanometers.

“Tiny gadgets I was dreaming about a quarter of a century ago are now becoming a reality at the nanoscale level,” Stoddart said during his tenure at UCLA, where he held the Fred Kavli Chair in Nanosystems Sciences and directed the California NanoSystems Institute at UCLA. He is currently professor emeritus in the UCLA department of chemistry and biochemistry.

While at UCLA in 2007, Stoddart and his colleagues successfully demonstrated a large-scale “ultra-dense” memory device that stores information using reconfigurable molecular switches — intricate, mechanically interlocked molecules assembled in Stoddart’s UCLA laboratory — an important step toward the creation of molecular computers that are much smaller and potentially more powerful than today’s silicon-based models.

Stoddart’s research team at UCLA was the world’s leader in making molecular switches, designing and manufacturing these interlocked molecules in which the relative motions of the components can be switched in controlled ways.

“Using molecular components for memory or computation, or to replace other electronic components, holds tremendous promise,” Stoddart said at the time. “This research is the culmination of a long-standing dream that these molecules could be used for information storage.”

Stoddart returns to UCLA each year to award the Norma Stoddart Prize for Academic Excellence and Outstanding Citizenship, which was named in memory of his late wife, to a recent UCLA doctoral graduate in the chemistry and biochemistry department. The prize was endowed by the Stoddart family in 2004 and first presented in 2011. Norma Stoddart was an accomplished biochemist and longtime adviser and manager of the Stoddart lab.

A common theme of Stoddart’s research has been the quest for a better fundamental understanding of self-assembly and molecular recognition processes in chemical systems. His work has focused on using this growing understanding to develop template-directed protocols that rely upon such processes to create molecular switches and motor-molecules.

As an illustration of the template-directed approach to chemical synthesis, Stoddart and his team in the 1990s produced a molecular version of the interlocking rings that symbolize the Olympic Games; the structure was just 4 nanometers long and about 1.5 nanometers in diameter. At UCLA, he and his colleagues went further and developed mechanically interlocked, self-assembling molecules called “suitanes,” based on their resemblance to a limbed torso enveloped in a one-piece “suit.”

“All the individual components must be matched perfectly with respect to one another, regarding their shape, size and connectors,” he said of the suitanes. “Discovering the way to dress a molecule with another one is a prelude to constructing artificial systems reminiscent of living cells.”

In 2006, Stoddart and his colleagues designed and constructed a molecular motor of nanometer size, powered only by sunlight. At the time, Stoddart listed a number of possible applications for the development, including nanoelectronics, molecular computers and nanovalves that could be used for the delivery of anticancer drugs and other medications.

He and his team developed a series of other nanomachines, including a nanovalve that could be opened and closed at will, trapping molecules in mesoporous glass and then releasing them on demand; a molecular solar cell that functions as a nanoscale power supply to drive a molecular machine; and an artificial molecular machine that functions like a nanoelevator — one of the most sophisticated engineered nanomachines at the time.

Prior to joining UCLA in 1997, Stoddart was a professor of organic chemistry at England’s University of Birmingham, where he also had headed the university’s school of chemistry since 1993.