UCLA researchers have imaged and created the first ever atomic resolution reconstruction of a herpesvirus capsid at 3.9 angstrom, a unit of length where individual amino acids or basic building blocks of proteins can be identified. This has allowed scientists to build a three-dimensional atomic model of a human cytomegalovirus capsid. Their findings demonstrate that the capsid, which is highly-pressurized from within, achieves stability through a suite of strategies thought to be shared with other herpesviruses that involves the evolutionary modification of a protein fold first seen in a different lineage of viruses. Researchers also revealed specific stabilization strategies for the virus, which includes an innovative manner of packing its DNA genome and recruiting a netlike protein layer above the capsid to secure it from the outside. In addition to understanding how herpesvirus capsids stabilize, the capsid atomic model holds promise for the design of novel therapeutic strategies against cytomegalovirus and other diseases. 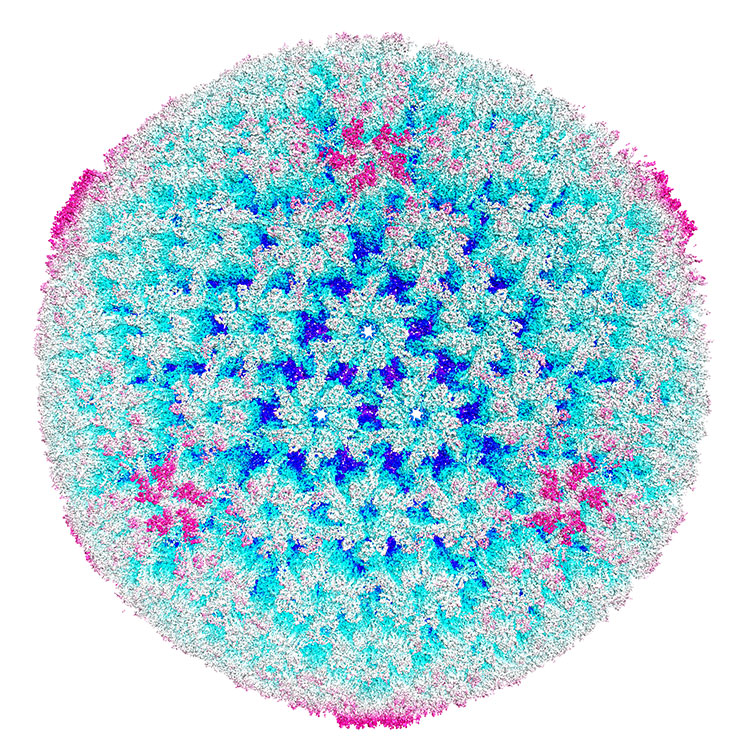 Human cytomegalovirus, or HCMV, is the leading viral cause of birth defects responsible for deafness and autism, and is a major cause of life-threatening complications in immune-compromised individuals such as HIV/AIDS and organ-transplant patients.

Previous evidence has suggested that a specific protein inside HCMV contributes to a netlike layer that may stabilize the HCMV capsid, but the exact mechanisms providing capsid stability remained unclear due to the lack of an atomic description of the HCMV particles. 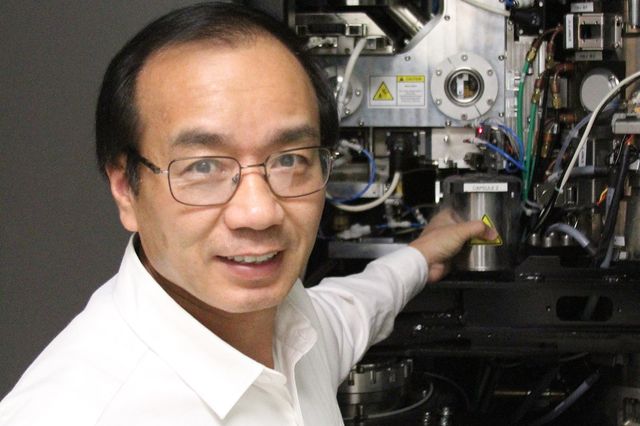 In the six-year study, Hong Zhou, UCLA professor of microbiology, immunology & molecular genetics, and his colleagues used cryo-electron microscopy to image the virus samples. These samples were flash frozen in liquid ethane to preserve their natural state and were successively imaged underneath a high-powered electron microscope. The resulting tens of thousands of two-dimensional electron microscope images were then computationally combined to produce a three-dimensional reconstruction of the imaged sample. At 3.9 angstrom resolution, researchers were able to observe sufficient detail in the reconstruction providing them the ability to identify individual amino acids and atomically model the structure in the sample.

Beyond providing a framework to understand mechanisms of capsid stabilization in the large family of herpesviruses, the HCMV atomic structures presented by the team of UCLA researchers also hold promise for the rational design of therapeutic strategies. HCMV’s ability to establish relatively nontoxic lifelong latency in hosts, its large genetic capacity, and other characteristics are ones shared among herpesviruses that give them desirable advantages over other viral candidates as tools in the development of gene delivery vehicles, cancer killing viruses, and vaccines against not just herpesviruses, but even HIV.

“We are extraordinarily excited about our work,” said Jonathan Jih, one of the first co-authors of the study. “Researchers have been trying to solve the herpesvirus structure for the better part of the last few decades, and this represents a quantifiable step forward in our understanding of herpesviruses, which are hugely medically relevant. We hope our structure will help usher in the discovery of not only an HCMV vaccine of which none currently exist, but in light of recent findings that suggest HCMV as a possible suitable vector, a potential cure for HIV/AIDs as well.”

The study was led by Hong Zhou, the paper’s senior author who serves as the Director of the Electron Imaging Center for Nanomachines and is a member of the California NanoSystems Institute at UCLA. The first authors are Xuekui Yu, assistant professor of microbiology, immunology & molecular genetics and Jonathan Jih, a research associate of the Imaging Center who first began work on this project during his undergraduate studies at UCLA. This paper was co-authored by Jiansen Jiang, a postdoctoral research fellow in Zhou’s lab.

This study is published online in the journal Science.