September 20, 2017 | A Brain Built From Atomic Switches Can Learn

A tiny self-organized mesh full of artificial synapses recalls its experiences and can solve simple problems. Its inventors hope it points the way to devices that match the brain’s energy-efficient computing prowess. 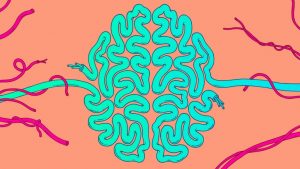 Brains, beyond their signature achievements in thinking and problem solving, are paragons of energy efficiency. The human brain’s power consumption resembles that of a 20-watt incandescent lightbulb. In contrast, one of the world’s largest and fastest supercomputers, the K computer in Kobe, Japan, consumes as much as 9.89 megawatts of energy — an amount roughly equivalent to the power usage of 10,000 households. Yet in 2013, even with that much power, it took the machine 40 minutes to simulate just a single second’s worth of 1 percent of human brain activity.

Now engineering researchers at the California NanoSystems Institute at the University of California, Los Angeles, are hoping to match some of the brain’s computational and energy efficiency with systems that mirror the brain’s structure. They are building a device, perhaps the first one, that is “inspired by the brain to generate the properties that enable the brain to do what it does,” according to Adam Stieg, a research scientist and associate director of the institute, who leads the project with Jim Gimzewski, a professor of chemistry at UCLA.

The device is a far cry from conventional computers, which are based on minute wires imprinted on silicon chips in highly ordered patterns. The current pilot version is a 2-millimeter-by-2-millimeter mesh of silver nanowires connected by artificial synapses. Unlike silicon circuitry, with its geometric precision, this device is messy, like “a highly interconnected plate of noodles,” Stieg said. And instead of being designed, the fine structure of the UCLA device essentially organized itself out of random chemical and electrical processes.

Yet in its complexity, this silver mesh network resembles the brain. The mesh boasts 1 billion artificial synapses per square centimeter, which is within a couple of orders of magnitude of the real thing. The network’s electrical activity also displays a property unique to complex systems like the brain: “criticality,” a state between order and chaos indicative of maximum efficiency.

Moreover, preliminary experiments suggest that this neuromorphic (brainlike) silver wire mesh has great functional potential. It can already perform simple learning and logic operations. It can clean the unwanted noise from received signals, a capability that’s important for voice recognition and similar tasks that challenge conventional computers. And its existence proves the principle that it might be possible one day to build devices that can compute with an energy efficiency close to that of the brain.

These advantages look especially appealing as the limits of miniaturization and efficiency for silicon microprocessors now loom. “Moore’s law is dead, transistors are no longer getting smaller, and [people] are going, ‘Oh, my God, what do we do now?’” said Alex Nugent, CEO of the Santa Fe-based neuromorphic computing company Knowm, who was not involved in the UCLA project. “I’m very excited about )the idea, the direction of their work,” Nugent said. “Traditional computing platforms are a billion times less efficient.”