October 5, 2017 | Bringing nanoscience out of the classroom and into the local community 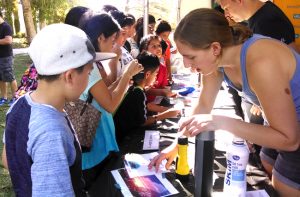 Like other families walking around the campus of Cal State University, Northridge, Maria Franco and her two daughters didn’t know what to expect when they approached tables filled with science equipment.

“I haven’t heard about nanoscience before,” said Andrea Franco, a ninth grader. “My favorite demo was the one where you could hear the music with the lights,” describing the fiber optic radio transmission.

For the second year in a row, more than 20 graduate students and staff from the California NanoSystems Institute performed hands-on kid-friendly demonstrations for hundreds of children, students and their families introducing various nanotechnology concepts.

“My daughters were in a science workshop in school and I wanted them to see more of the sciences at this demonstration to learn more and prepare for a science competition they will be entering soon,” said Franco through one of CNSI’s Spanish speaking volunteers.

“CNSI has a mission to educate people of all ages about nanoscience – not just researchers,” said Rita Blaik, CNSI Education Director. “Feria de Educación is a great opportunity for us because it lets us reach a large portion of the public that is largely underserved and has a hard time accessing resources on STEM education.”

At one station, CNSI volunteers including Robert Boutelle, a fifth-year graduate student majoring in Materials Science, described superhydrophobic surfaces by using a nasturtium plant, a type of superhydrophobic plant.

They described that when water dries on a surface like on a car window, white filmy crust is often left behind. This can be bad for a plant because the crust can block the sun, but the sun is necessary for photosynthesis. Superhyrophobic surfaces like nasturtium repel water and use its surface as a cleaning mechanism. This mechanism can be exploited by engineers in making engineered surfaces inspired by these plants such as Teflon.

“My favorite part of an event like this is actually seeing people who are interested in science,” said Boutelle. “We can encourage kids to continue on with science because a lot of times, they get discouraged by course work. But for them to see science in action, really makes it encouraging for them and us as volunteers.”

Feria de Educación is a partnership between the CSU Latino Initiative and Univision, which is the nation’s leading Spanish-language media company.

CNSI creates multidisciplinary education and training opportunities that supplement and enhance traditional degree programs and classroom curricula to prepare a new generation of science leaders who will apply science to emerging global challenges. For nearly a decade, CNSI has collaborated with a dedicated group of UCLA researchers to create academic courses, workshops, professional development and training opportunities that engage the educators of today and students who will become the scientists of tomorrow.