Engineers from UCLA, 4 other universities produce nanoscale device that mimics the structure of tree branches 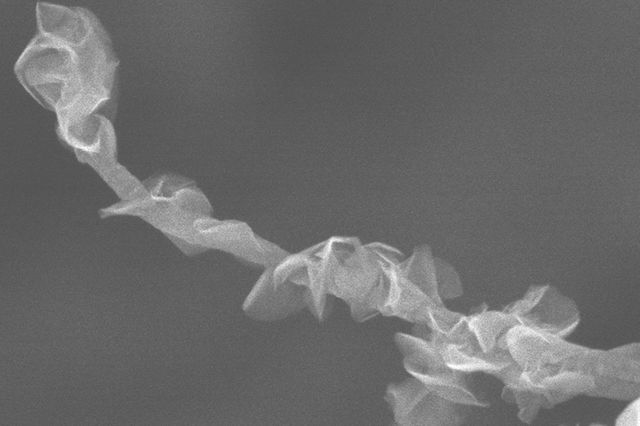 The branch-and-leaves design is made up of arrays of hollow, cylindrical carbon nanotubes (the “branches”) and sharp-edged petal-like structures (the “leaves”) made of graphene. (Image courtesy Tim Fisher/UCLA Engineering)

Mechanical engineers from the UCLA Henry Samueli School of Engineering and Applied Science and four other institutions have designed a super-efficient and long-lasting electrode for supercapacitors. The device’s design was inspired by the structure and function of leaves on tree branches, and it is more than 10 times more efficient than other designs.

The electrode design provides the same amount of energy storage, and delivers as much power, as similar electrodes, despite being much smaller and lighter. In experiments it produced 30 percent better capacitance — a device’s ability to store an electric charge — for its mass compared to the best available electrode made from similar carbon materials, and 30 times better capacitance per area. It also produced 10 times more power than other designs and retained 95 percent of its initial capacitance after more than 10,000 charging cycles.

Their work is described in the journal Nature Communications.

Supercapacitors are rechargeable energy storage devices that deliver more power for their size than similar-sized batteries. They also recharge quickly, and they last for hundreds to thousands of recharging cycles. Today, they’re used in hybrid cars’ regenerative braking systems and for other applications. Advances in supercapacitor technology could make their use widespread as a complement to, or even replacement for, the more familiar batteries consumers buy every day for household electronics.

Engineers have known that supercapacitors could be made more powerful than today’s models, but one challenge has been producing more efficient and durable electrodes. Electrodes attract ions, which store energy, to the surface of the supercapacitor, where that energy becomes available to use. Ions in supercapacitors are stored in an electrolyte solution. An electrode’s ability to deliver stored power quickly is determined in large part by how many ions it can exchange with that solution: The more ions it can exchange, the faster it can deliver power.

Knowing that, the researchers designed their electrode to maximize its surface area, creating the most possible space for it to attract electrons. They drew inspiration from the structure of trees, which are able to absorb ample amounts of carbon dioxide for photosynthesis because of the surface area of their leaves.

“We often find inspiration in nature, and plants have discovered the best way to absorb chemicals such as carbon dioxide from their environment,” said Tim Fisher, the study’s principal investigator and a UCLA professor of mechanical and aerospace engineering. “In this case, we used that idea but at a much, much smaller scale — about one-millionth the size, in fact.”

To create the branch-and-leaves design, the researchers used two nanoscale structures composed of carbon atoms. The “branches” are arrays of hollow, cylindrical carbon nanotubes, about 20 to 30 nanometers in diameter; and the “leaves” are sharp-edged petal-like structures, about 100 nanometers wide, that are made of graphene — ultra thin sheets of carbon. The leaves are then arranged on the perimeter of the nanotube stems. The leaf-like graphene petals also give the electrode stability.

The engineers then formed the structures into tunnel-shaped arrays, which the ions that transport the stored energy flow through with much less resistance between the electrolyte and the surface to deliver energy than they would if the electrode surfaces were flat.

The electrode also performs well in acidic conditions and high temperatures, both environments in which supercapacitors could be used.

Fisher directs UCLA’s Nanoscale Transport Research Group and is a member of the California NanoSystems Institute at UCLA. Lei Chen, a professor at Mississippi State, was the project’s other principal investigator. The first authors are Guoping Xiong of the University of Nevada, Reno, and Pingge He of Central South University. The research was supported by the Air Force Office of Scientific Research.