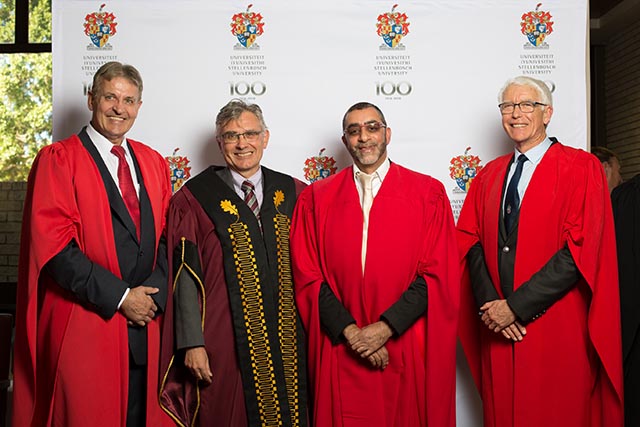 André Nel, distinguished professor of medicine and associate director of the California NanoSystems Institute at UCLA, was recently bestowed an honorary doctorate by Stellenbosch University, one of Africa and South Africa’s leading tertiary institutions.

Nel, who is an alumnus of SU, received the Degree Doctor of Science (DSc), honoris causa, at the third graduation ceremony of SU’s March 2018 Graduation Ceremonies. He was honored for his multiple high-level and consistently excellent contributions to the science of nanomedicine, allergy and immunology, which have not only advanced medical science and technology globally, but continue to have a tangible impact in ensuring a safe, healthy and environmentally-friendly world.

In his acceptance speech, Nel expressed his gratitude to his alma mater for honoring him in this way.
Thanking those who have supported him, he said “it’s a team effort that brings you here.”
He also lauded SU with providing him with an excellent education that has stood him in good stead over the past 30 years.

MORE ABOUT THE COMMENDATION
The degree Doctor of Science (DSc), honoris causa, to André E Nel for his multiple high-level and consistently excellent contributions to the science of nanomedicine, allergy and immunology, which have not only advanced medical science and technology globally, but continue to have a tangible impact in ensuring a safe, healthy and environmentally-friendly world.

Through his life-long commitment to medical sciences research, SU alumnus Professor André E. Nel has advanced the science of nanomedicine, allergy and immunology. Holding an MB,ChB, MMed (Internal Medicine) and MD, his achievements studying at SU earned him high acclaim, including the gold medal for best MB,ChB student, the Hoescht prize for most promising final-year medical student and the Dean’s medal for top final-year registrar. Today a distinguished professor at UCLA, this renowned scholar is a high-impact contributor to science and society. Having founded UCLA’s Division of NanoMedicine, Nel is director of the Center for the Environmental Implications of Nanotechnology, a $50 million facility funded by the National Science Foundation (NSF) and Environmental Protection Agency. Here, he studies the responsible use of nanotechnology to ensure that communities worldwide can continue leveraging its benefits without harming the environment. He is also a leader in developing nanomedicines for pancreas cancer, with research breakthroughs leading to a startup company.

His specialized skills have resulted in his appointment as a member of the US President’s Council of Advisors for Science and Technology panel for the review of the National Nanotechnology Initiative (NNI), as well as a distinguished NSF panel that produced a government vision for American nanotechnology research over the next decade. He has represented the National Institutes of Health and NNI in signing cooperative research agreements with Japan, the Chinese Academy of Sciences, and Russia. This associate editor of top-rated international journal ACS Nano and popular conference speaker has produced over 300 widely cited publications. Profoundly relevant to everyday life, his research has led to a large number of filed patents.

STELLENBOSCH UNIVERSITY:
Stellenbosch University (SU), celebrating its centenary this year, is one of the oldest universities in South Africa. With its 10 faculties (AgriSciences, Economic and Management Sciences, Medicine and Health Sciences, Engineering, Military Sciences, Arts and Social Sciences, Science, Education, Law and Theology), it boasts the highest weighted research output per full-time academic staff member of all South African universities and the second-highest number of scientists in South Africa who have been ranked by the National Research Foundation (NRF) – 429 in 2017.
www.sun.ac.za