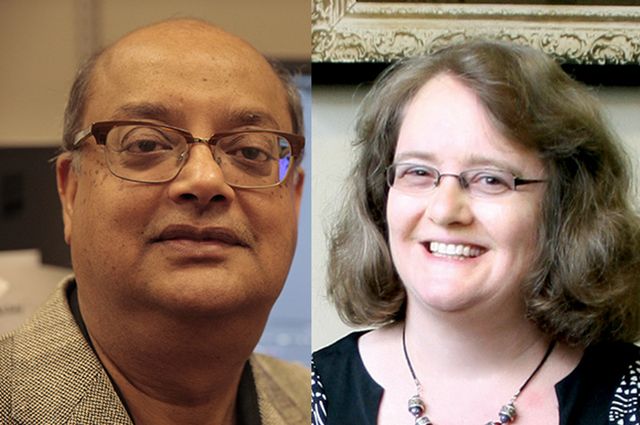 Two UCLA professors, Utpal Banerjee and Andrea Bertozzi, were elected to the National Academy of Sciences today in recognition of their “distinguished and continuing achievements in original research.”

Membership in the academy is one of the highest honors that a U.S. scientist can receive. Its members have included Albert Einstein, Robert Oppenheimer, Thomas Edison, Orville Wright and Alexander Graham Bell. The academy announced the election of 84 new members and 21 foreign associates.

Banerjee is the Irving and Jean Stone Endowed Professor of Life Sciences and a distinguished professor in the department of molecular, cell and developmental biology in the UCLA College, and of biological chemistry in the David Geffen School of Medicine at UCLA. He is also co-director of the Eli and Edythe Broad Center of Regenerative Medicine and Stem Cell Research at UCLA.

His laboratory works to identify basic molecular strategies that are conserved in development across species. Banerjee’s research team studies fruit flies to learn how blood progenitor cells — cells with the potential to differentiate into all blood cell types — end up as one type of cell versus another. Most principles that have been laid out in developmental biology — from mechanisms of stem cell maintenance to how a head differs from a tail — came from research in fruit flies, also known as Drosophila melanogaster, Banerjee has said. He is also a member of UCLA’s Jonsson Comprehensive Cancer Center.

He spearheaded an approach that takes undergraduate students into a UCLA laboratory to conduct hands-on research. Undergraduates in his functional genomics course conducted original research on the fruit fly’s genes and development — work that led to publications in peer-reviewed scientific journals with more than 250 student authors.

Andrea Bertozzi is a UCLA distinguished professor of mathematics and of mechanical and aerospace engineering in the UCLA Samueli School of Engineering. Bertozzi holds UCLA’s Betsy Wood Knapp Chair for Innovation and Creativity and is a member of the California NanoSystems Institute at UCLA. She is also UCLA’s director of applied mathematics.

She is leading UCLA’s new Simons Mathematical NanoSystems Initiative, with support from the Simons Foundation’s Math+X Investigator. The initiative focuses on two areas of research: understanding science at the nanoscale through advances in imaging and sensing technology, and, secondly, the development of micro-scale microfluidic engineering and device design.

In addition to conducting research on nanoscale imaging, Bertozzi plans to develop mathematical theories for behavior of complex fluids in microfluidic geometries in which the physics might be balanced with thermal effects, surface tension effects, contact line dynamics, magnetic forces and other physics relevant to small devices that could have many useful applications.

Bertozzi has conducted research with Jeffrey Brantingham, a UCLA professor of anthropology, and colleagues to apply mathematics to reducing crime through predictive policing. This research has resulted in a mathematical model they devised to guide where the Los Angeles Police Department should deploy officers, which led to substantially lower crime rates.

The National Academy of Sciences was established in 1863 by a congressional act of incorporation signed by Abraham Lincoln that calls on the academy to act as an official adviser to the federal government, upon request, in any matter of science or technology. The academy is a private organization of scientists and engineers dedicated to the furtherance of science and its use for the general welfare.