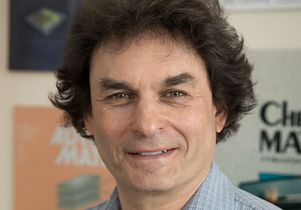 Richard Kaner, a UCLA distinguished professor of chemistry and biochemistry, and of materials science and engineering, who holds the Dr. Myung Ki Hong Endowed Chair in Materials Innovation, has won the Royal Society of Chemistry’s 2018 Centenary Prize. The award is for “outstanding contributions to solid-state synthesis, energy storage materials and super hard materials.”

Kaner, who joined UCLA in 1987, develops new materials for a wide range of applications. These include developing individual layers of carbon known as graphene for use in energy storage; demonstrating that conducting polymers can be used for water purification including cleaning up debris left by oil fracking; and creating the world’s hardest metals.

His research team reported in 2017 that they designed a device that can use solar energy to inexpensively and efficiently create and store energy, which could be used to power electronic devices, and to create hydrogen fuel for eco-friendly cars. Also in 2017, his research team designed a new bio-friendly energy storage system called a biological supercapacitor, which operates using charged particles, or ions, from fluids in the human body. His research team also discovered a way to make organic semiconductors more useful.

Kaner is among the world’s most highly cited scientists, according to Thomson-Reuters rankings. Among his many awards and honors is his election as a fellow of the American Association for the Advancement of Science, the American Chemical Society, the Materials Research Society, and the Royal Society of Chemistry; as well as awards from the Fulbright, Guggenheim, Packard and Sloan Foundations.