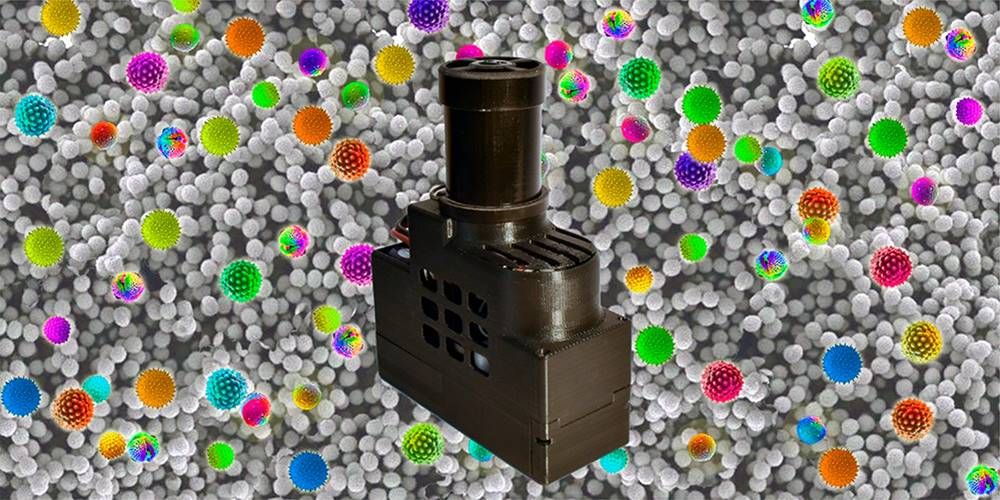 FINDINGS
UCLA researchers invented a portable device that uses holograms and machine learning to identify and measure airborne biological particles, or bioaerosols, that originate from living organisms such as plants or fungi. Trained to recognize five common allergens — pollen from Bermuda grass, oak, ragweed and spores from two types of mold — the system classified samples with an accuracy of 94 percent using deep learning.

BACKGROUND
Each minute, human adults typically breathe in between 100 and 1,000 bioaerosols — including pollens, spores, toxins and microbes — and an even greater number, 1 million or more, in highly contaminated areas. These tiny biological particles can trigger allergies, asthma and other diseases.

Quantifying exposure to those biological particles is difficult and can be time consuming and expensive. The current methods for identifying bioaerosols rely on 50-year-old technology: Researchers collect samples using filters or spore traps, and then transport them to labs, where they are stained and inspected under microscopes by scientists. Another challenge is that there are only a small number of air-sampling stations worldwide that have bioaerosol sensing or measurement capabilities.

METHOD
The device pulls in air and traps particles on a sticky surface that is lit up by a laser, which generates a hologram. An image sensor chip scans the hologram and sends that data to a remote server.

There, a type of artificial intelligence powered by a neural network cleans up the image, which is then run through an algorithm that crops it down to the sections that depict the biological particles. A second neural network classifies those particles from among a set of preloaded allergen types.

The device can be made from parts costing about $200. It weighs less than 600 grams — approximately the same as three smartphones — and measures about 14 centimeters wide, 17 centimeters long and 6 centimeters thick.

IMPACT
The device is the first cost-effective portable device that senses and classifies airborne biological particles automatically and without needing to label using stains. Because the device is controlled wirelessly, it could potentially be carried by unmanned vehicles such as drones, which would allow scientists to monitor sites that would otherwise be dangerous or difficult for humans to reach. The technology could also be used in a network of sensors covering a wide area, which would enable scientists to create maps of pollen, spore and microbe density.

JOURNAL
The study was published online by ACS Photonics.

FUNDING
The study was supported by the National Science Foundation, the Vodafone Americas Foundation and the Howard Hughes Medical Institute.