April 29, 2019 | Student uses microscopes to get closer look at potential for music creation

Ivana Dama takes a closer look at what composes an instrument. 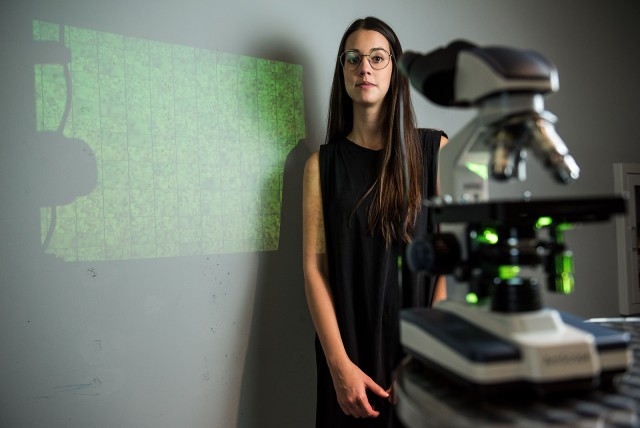 Third-year design media arts student Ivana Dama’s audiovisual project consists of a microscope and slides serving as musical instruments. She triggers specific sounds by changing the parameters of the microscope’s camera and layering the output with other sound effects to create music. (Niveda Tennety/Daily Bruin)

This article was originally published by The Daily Bruin.

Ivana Dama is innovating what can constitute a musical instrument, using a microscope and human brain tissue in her latest performance.

The third-year design media arts student gave a presentation of her audiovisual projectin an improvisational performance at Studio 106 L.A. on April 21. The ongoing project consists of a microscope and slides that Dama uses as a musical instrument. By manipulating parameters of the microscope’s camera, such as focus and movement, Dama triggers specific sound effects – like altered frequencies of different piano samples – to create music. The microscopic image Dama uses to stimulate sounds is projected behind her, and is visually filtered based on the frequency of the audio it creates. Despite her lack of a background in music, Dama said she was inspired to use sound as an artistic medium.

“I was interested in exploring the different ways that we can play the instruments,” Dama said. “Not just by knowing really well certain instruments but kind of applying new rules into the musical instruments and the music world.”

At the Sound + Science Symposium 2.0 at the California NanoSystems Institute at UCLA on Friday, Dama will give another presentation of her project. Dillon Bastan, a third-year design media arts students who collaborated with Dama on her project, is also set to perform at the event, and the two will be leading hands-on workshops for the technology they use.

Dama said her work aims to explore space at different scales – such as the microscopic, architectural and cosmic levels. For example, one of Dama’s recent projects featured metal-engraved satellite images of Serbia, where Dama grew up, from the first day of the 1999 NATO bombings to the last. Dama said her goal was not to show her perspective of the events, but to highlight the viewpoint of the pilots flying over the country. Another of Dama’s projects presented enlarged, 10-foot-tall scans of an ant farm to compare a human’s interpretation of time with that of insects’, demonstrating her interest in working with dimensions of space to present new perspectives.

“I always liked the microscopes as an instrument and I was also intrigued by seeing something in the microscope that … was hard to see in reality,” Dama said. “But this was the first time that I tried to actually hear how (it sounds) like something that we can hear.”

Bastan collaborated with Dama to create the project by helping identify features of the microscopic camera, such as blurring or brightness, that would create noticeable effects on the images. He then aided in creating the algorithms that process these changes to the images to create sound effects. For example, when the microscope’s light is turned on to illuminate the slides, a base organlike sound is produced, Dama said. Bastan, who curates for Studio 106, invited Dama to present her project at the gallery because of her experience working with mixed media, such as light and sound, and his desire to create a community for multidisciplinary artists to share their work.

“For me and for the other people curating there, we lean toward avant-garde, experimental, amateur, (do-it-yourself), really expressive kind of artists and pieces,” Bastan said.

Amy Fang, a second-year design media arts student, attended Dama’s performance at Studio 106 and said she was impressed by Dama’s ability to repurpose an object associated with STEM traditions into an artistic instrument. She added that the merging of science and art does not happen often, so an interdisciplinary project like Dama’s is fascinating.

Marcos Otero García, a postdoctoral researcher studying Alzheimer’s disease in UCLA’s Center for Health Sciences, also collaborated with Dama on the project. Otero García provided her with human brain cell slides to be used in conjunction with the microscope to create sound. The slides were projected on a screen behind Dama, who explained the process as circular – the image of the slides influences the sound and the sound, in turn, influences the projection of the slides.

“It was just kind of like you’re seeing this whole … multidimensional visualization of the human brain,” Fang said.

Dama is currently working on another project that also experiments with sound and challenges traditional ideas of how to play an instrument. The project incorporates a piano that people can play by walking around, with notes and frequencies triggered by the geographical location of the walker. Similar to her microscope project, Dama was inspired to create an instrument that anyone can be in control of playing.

“My idea was that my instrument can be played by anyone,” Dama said. “Anyone can be in control of playing it. You don’t have to be (a professional) in knowing … violin or the piano.”