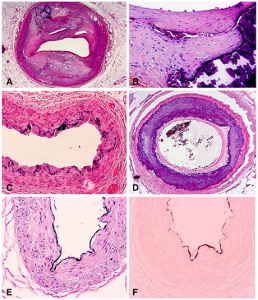 An international team of researchers, including UCLA investigators, uncovered a mechanism behind the chronic inflammation seen in atherosclerosis, or hardening of the arteries, as well as a possible way to protect against that inflammation.

The study showed that the inflammation is due to immune cells called neutrophils. These cells secrete antimicrobial proteins that help defend the body, but also can harm healthy tissue.

The researchers found that neutrophils are attracted by specific biochemical signals from the smooth muscle cells in the walls of blood vessels when those muscle cells are burdened with plaques—the fatty deposits found within artery walls in atherosclerosis. The action of the neutrophils recruits even more neutrophils, kickstarting a cycle of chronic inflammation.

The study describes how histone H4, an antimicrobial protein released by neutrophils, creates pores in the membranes of the muscle cells. Those pores let fluids inside that can cause the cells to burst and die. Loss of smooth muscle cells in blood vessels, and the support they provide, in turn destabilizes plaques, with potentially deadly results.

Further, the researchers designed and synthesized a peptide—a string of amino acids smaller than a protein—that blocks the action of histone H4, neutralizing its toxic effects.

Atherosclerosis is very common and usually has no symptoms, but can be life-threatening. The plaque buildup that comes with the disease causes a narrowing of the arteries. Chronic inflammation ultimately can rupture arterial walls, freeing plaque into the bloodstream. The plaque then can create a clot and block blood flow, resulting in a heart attack or a stroke—respectively the No. 1 and No. 5 causes of death in the U.S.

The researchers performed a series of experiments using mouse models for atherosclerosis and samples of human tissue from vascular surgery. UCLA investigators performed machine-learning tests to show that histone H4 can punch holes in cell membranes and kill smooth muscle cells, as well as the corresponding experiments to confirm this finding.

The tailored peptide designed by the researchers could be a first step toward a therapy that prevents chronic inflammation in atherosclerosis. That peptide is expected to similarly address other disorders associated with chronic inflammation, such as arthritis and inflammatory bowel disease. The study also offers insight into the inflammatory action behind atherosclerosis, which has been poorly understood. In profiling the activity of histone H4 from neutrophils, the scientists identified a previously unrecognized biochemical mechanism that kills cells.

The senior author was Dr. Oliver Soehnlein of Ludwig-Maximilians-Universität (LMU) München in Germany. UCLA co-authors were Gerard C. L. Wong, a professor of bioengineering and of chemistry and biochemistry and a member of the California NanoSystems Institute; M.D./Ph.D. candidate Ernest Y. Lee; and graduate student Giancarlo Santiago Santos. The first author was Carlos Silvestre-Roig of LMU München. Other authors are listed in the journal article.

The research was recently published in Nature.

The study was supported by grants from the Deutsche Forschungsgemeinschaft, the Else Kröner-Fresenius-Stiftung foundation, the Leducq foundation, the Vetenskapradet, and Spain’s Ministerio de Ciencia, Innovacion y Universidades.