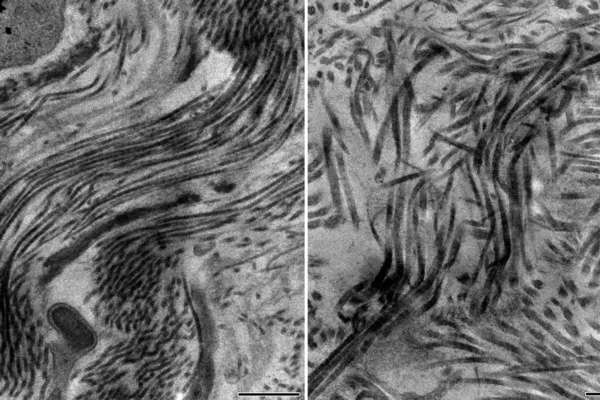 New UCLA research conducted in mice could explain why some people suffer more extensive scarring than others after a heart attack. The study, published in the journal Cell, reveals that a protein known as type 5 collagen plays a critical role in regulating the size of scar tissue in the heart.

“Two individuals with the same degree of heart attack can end up with different amounts of scar tissue,” said Dr. Arjun Deb, the study’s senior author and a member of Eli and Edythe Broad Center of Regenerative Medicine and Stem Cell Research at UCLA. “Given the clear correlation between scar size and survival rates, we set out to understand why some hearts scar more than others. If we can reduce this scarring, we can greatly improve survival.”

Following a heart attack, connective tissue cells called fibroblasts secrete a variety of proteins that combine to form scar tissue. The vast majority of these proteins are collagens, of which there are 26 types, all functioning as a kind of glue that holds the body together.

To determine the role this collagen plays in scarring, the researchers genetically engineered a mouse model that was incapable of producing type 5 collagen in scar tissue following a heart injury. The results were surprising.

“Normally if you delete a collagen, you would expect the scar tissue size to decrease because collagen forms scar tissue. We found, paradoxically, that the scar size actually increased by 50%,” said Deb, who is a professor of medicine in the division of cardiology at the David Geffen School of Medicine at UCLA and director of the school’s cardiovascular medicine research theme.

Digging deeper, Deb and his collaborators from the Geffen School of Medicine, the California NanoSystems Institute at UCLA and the UCLA Division of Life Sciences found that type 5 collagen was regulating the stiffness of scar tissue. Without it, the scar tissue was less stiff and therefore prone to expansion from the force of the blood within the heart.

“Scar tissue without type 5 collagen is compliant like rubber,” Deb said. “So when the heart fills with blood, the scar tissue expands in much the same way as a rubber balloon expands when it is filled with air.”

This expansion, the team observed, was only the beginning. The protein-secreting fibroblasts are alerted to the scar’s expansion by their integrins, receptors found within the cell membrane that sense changes to the environment and send signals inward to adjust how the cell is behaving in response. The fibroblasts consequently secrete more proteins in an attempt to reinforce the scar and stop the expansion. But without type 5 collagen, Deb noted, the cycle of expansion and scar growth simply continues.

To stop the cycle, Deb tested a drug called Cilengitide that disrupts integrin signaling. Developed as a cancer treatment, the drug was found to be safe for use in humans in a phase 3 clinical trial. The team found that treating the type 5 collagen–deficient mice with Cilengitide disrupted this feedback cycle and reduced scar size.

Subtle expression differences in type 5 collagen could explain why some heart attack survivors form larger scars than others, said Deb, who is also a professor of molecular, cell and developmental biology.

He is now working to develop a test that would identify people whose bodies produce less type 5 collagen. It is possible that such a test could one day be used in a precision medicine approach aimed at people who may be prone to increased scarring from heart attacks and could benefit from drugs such as Cilengitide.

Deb’s team is also collaborating with physicians and scientists from the division of dermatology at the Geffen School of Medicine to pursue a potential immediate clinical application for people with Ehlers-Danlos syndrome, a connective tissue disorder characterized by excessive scarring, even from minor injuries, due to mutations in the gene that produces type 5 collagen.

The use of Cilengitide has not been tested in humans as a treatment for excessive scarring and has not been approved by the Food and Drug Administration as safe and effective for this use. The newly identified method for treating dysregulated wound healing is covered by a patent application filed by the UCLA Technology Development Group on behalf of the Regents of the University of California.