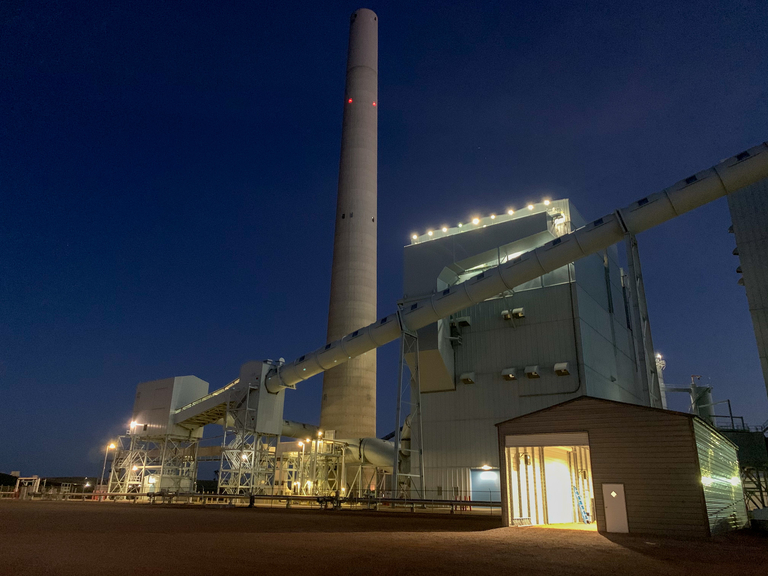 The technology for producing CO2Concrete is being demonstrated at the Wyoming Integrated Test Center at the Dry Fork Station in Gillette, Wyoming. (Photo credit: Gabriel Falzone/UCLA)

A UCLA research team has received a two-year, $2 million grant from the U.S. Department of Energy to support development of a process that can convert carbon dioxide emissions into construction materials.

That grant, and an additional $905,000 in new funding from UCLA discretionary funds and industry partners, will advance research led by Gaurav Sant, a professor of civil and environmental engineering and of materials science and engineering at the UCLA Samueli School of Engineering. A team headed by Sant invented CO2Concrete, a form of concrete that is made in part from carbon dioxide emissions, which are an underlying cause of climate change.

Sant said the product will have a carbon footprint 50% to 70% lower than that of regular concrete used in construction. The production of cement results in more than 8% of annual man-made carbon dioxide emissions.

“We are very pleased to have the support of the Department of Energy and our industry and philanthropic partners, which alongside the talent of UCLA’s faculty, students and scholars, has been foundational to the work we have been able to accomplish,” said Sant, who is also the director of UCLA’s Institute for Carbon Management. “This support allows the institute to advance its mission to decarbonize heavy industry operations, and to develop better ways to use waste carbon dioxide emissions.”

The UCLA initiative is one of 11 projects in four areas of interest chosen to share a total of approximately $17 million through the Carbon Utilization Program, which is administered by the Department of Energy’s Office of Fossil Energy. The UCLA team received the only award in the area of “production of inorganic materials: maximizing uptake in concrete and cement.”

The team also is one of five finalists competing for a $7.5 million prize in the coal track of the NRG COSIA Carbon XPRIZE, which is seeking the most viable technology for turning carbon dioxide emissions into valuable products. (Carbon XPRIZE also has a separate category for entries in a natural gas track.)

Originally scheduled for February but delayed due to the COVID-19 pandemic, the final round of competition began in June, when the UCLA team moved to the Wyoming Integrated Test Center to demonstrate its system on an industrial scale. The test center is part of Dry Fork Station, a coal-based power plant outside of Gillette, Wyoming.

The demonstration will run for 90 days and produce more than 140 metric tons (over 300,000 pounds) of CO2Concrete. Some of the resulting product will be used for small projects on the UCLA campus, and some will be donated for use at construction sites elsewhere.

The UCLA team previously received, among other funding sources, $500,000 from the XPRIZE organization after reaching the finals in 2018, a $1.5 million gift in 2017 from the Anthony and Jeanne Pritzker Family Foundation, as well as a separate $1.8 million grant from the Department of Energy in 2019. Altogether, the team has raised more than $8 million toward the development of the CO2Concrete technology.

Sant is also the founder and CEO of CO2Concrete, a private company based in Santa Fe, New Mexico, which was launched to commercialize the technology being developed at UCLA. All research grants and philanthropic gifts to support research on the technology are directed to UCLA.

Other members of the UCLA team are Dante Simonetti, a professor of chemical and biomolecular engineering, and Gabriel Falzone and Iman Mehdipour, staff scientists at the Institute for Carbon Management.