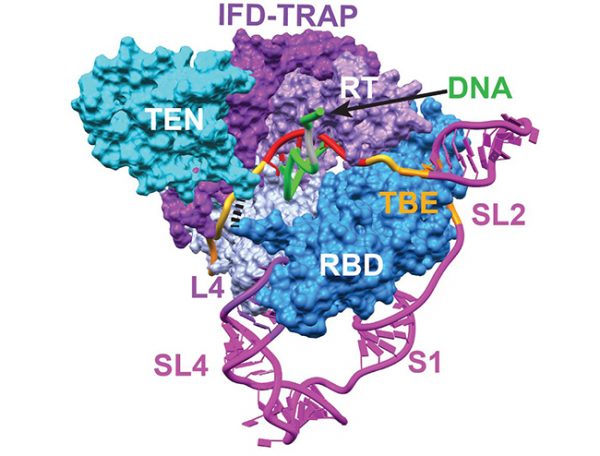 The catalytic core of the enzyme telomerase

The Australian Broadcasting Corp’s award winning “The Science Show” is considered by many to be the world’s best science broadcast program.  In the seven-minute interview, which is part of a program titled “Three Exceptional Women”, Feigon discusses her important telomerase research. In the interview, Williams praises Feigon’s research as “sensational.” Listen to the show here.

Professor Juli Feigon was the first female assistant professor in the Department of Chemistry & Biochemistry when she joined the UCLA faculty in 1985. She is currently Distinguished Professor of Biochemistry and holds the Christopher Foote Term Chair. For the past fifteen years a major focus of Feigon’s laboratory has been on telomerase structure and function. Starting with studies of small pieces of the RNA and protein components of the telomerase enzyme by NMR spectroscopy and X-ray crystallography and progressing to studies of the entire telomerase enzyme by electron microscopy, her work has provided seminal insights into structure, assembly, interactions, and mechanism of this unique enzyme.

Enzyme may play key role in cancer and ageing

Telomerase is an enzyme involved with telomeres, the caps at the ends of our chromosomes. Juli Feigon is interested in the molecular structure of telomerase and began investigating it ~15 years ago. Back then, almost nothing was known of the structure of the enzyme. Telomerase adds DNA to the ends of chromosomes to make up for loss during the aging process. It is also involved in cell death, a necessary process. As Juli Feigon explains, knowing the molecular structure of telomerase could lead to the development of drugs to target the activity of the enzyme in ways useful for treating cancer as well as the ageing process.