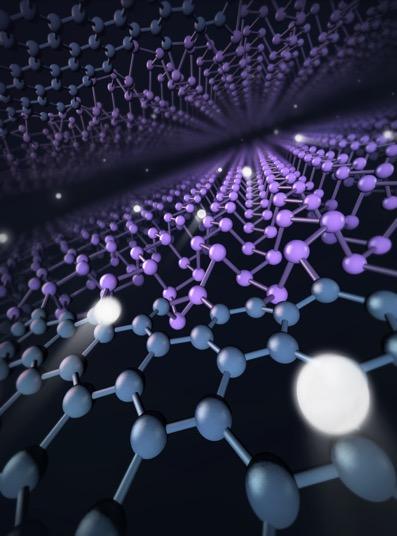 This article was originally published by Physics World

A new electrode material could make it possible to construct lithium-ion batteries with a high charging rate and storage capacity. If scaled up, the anode material developed by researchers at the University of Science and Technology of China (USTC) and colleagues in the US, including California NanoSystems Institute Member Xiangfeng Duan, might be used to manufacture batteries with an energy density of more than 350 watt-hours per kilogram – enough for a typical electric vehicle (EV) to travel 600 miles on a single charge.

The new research was published in the Journal Science.

Lithium ions are the workhorse in many common battery applications, including electric vehicles. During operation, these ions move back and forth between the anode and cathode through an electrolyte as part of the battery’s charge-discharge cycle. A battery’s performance thus depends largely on the materials used in the electrodes and electrolyte, which need to be able to store and transfer many lithium ions in a short period – all while remaining electrochemically stable – so they can be recharged hundreds of times. Maximizing the performance of all these materials at the same time is a longstanding goal of battery research, yet in practice, improvements in one usually comes at the expense of the others.

“A typical trade-off lies in the storage capacity and rate capability of the electrode material,” co-team leader Hengxing Ji tells Physics World. “For example, anode materials with high lithium storage capacity, such as silicon, are usually reported as having low lithium-ion conductivity, which hinders fast battery [charging]. As a result, the increase in battery capacity usually leads to a long charging time, which represents a critical roadblock for more widespread adoption of EVs.”

New black phosphorus anode material
The anode in most lithium-ion batteries is made of graphite. Researchers led by Ji at USTC and Xiangfeng Duan at the University of California, Los Angeles, made their new anode material by combining graphite with black phosphorus. This 2D layered material had been considered before as a candidate for anodes, but tests showed that its electrochemical performance was far below its theoretical potential.

One reason for the shortfall is that the material’s structure deforms during battery operation. This deformation, which begins at the edges of the black phosphorus layers, reduces the material’s quality to such an extent that lithium ions cannot easily transfer through it.

By combining black phosphorous with graphite, Ji, Duan and colleagues showed that the chemical bonds between the two materials stabilize the edge structure and prevent unwanted edge changes. To overcome the continued formation and build-up of an ionically less conductive solid-electrolyte interphase, the team applied a thin polyaniline gel coating to the electrode materials – a strategy that also reinforced the transport path for lithium ions.

Towards higher energy density and fast charging
The researchers tested the charging-cycle performance of their new electrode material by preparing sample electrodes using a method that is compatible with industrial fabrication processes. They found that their test devices had reversible capacities of 910 mA.hour/g, 790 mA.hour/g and 440 mA.hour/g after more than 2000 cycles at 2.6 A/g, 5.2 A/g and 13 A/g, respectively. For context, an anode material that can charge at 13 A/g with a reversible capacity of 440 mA.hour/g implies that an advanced lithium-ion battery made with this technology could be charged in less than 10 minutes.

“If scalable production can be achieved, this material may provide an alternative, updated graphite anode, and move us toward a lithium-ion battery with an energy density of higher than 350 watts-hour per kilogram,” says Sen Xin, a researcher at the Institute of Chemistry, Chinese Academy of Sciences, and one of the study’s co-first authors.This figure, he adds, means that an electric vehicle equipped with such a battery could travel 600 miles on a single charge – making it competitive with conventional combustion-engine vehicles. By way of comparison, the Tesla Model S can travel 400 miles on one charge.