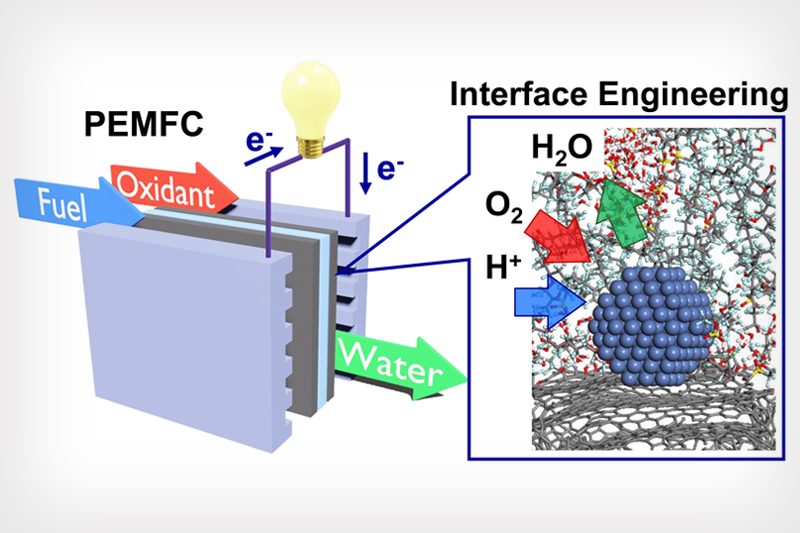 This article was originaly published by the UCLA Samueli Newsroom.

A team of UCLA, Caltech and Ford Motor Company researchers has improved fuel-cell technologies to exceed the U.S. Department of Energy targets in efficiency, stability and power. No other reported fuel cells have reached all these milestones simultaneously.

This latest breakthrough may enable a new approach to renewable energy, using solar energy to convert water (H2O) to hydrogen (H2) during the day and hydrogen back to water at night while providing electrical power.

The researchers say this major advance in performance could help usher in an inexpensive and practical generation of zero-emissions energy technology to power cars and other vehicles, emitting only water into the atmosphere. The research concentrates on fine-tuning microscopic surface details where the energy-providing chemical reaction takes place. A study detailing the research was recently published in Matter.

Similar to a battery, a fuel cell provides stored energy. A proton-exchange membrane fuel cell (PEMFC) gets its energy from the chemical reaction of stored hydrogen and oxygen from the air. These gases combine inside the fuel cell to provide electrical power while emitting only water without carbon dioxide, making this fuel cell environmentally friendly. The PEMFC technology holds great promise as a clean alternative to the internal combustion engine of cars, which emits greenhouse gases and pollutants.

Nonetheless, several hurdles must be surmounted before this fuel-cell technology can be widely adopted. A major issue is that the chemical reaction of reducing oxygen to form water is very sluggish, requiring a huge amount of expensive platinum to kick start the reaction and keep it going. In addition, while the produced water vapor is far better than carbon emissions, its presence at the reaction site would stop the reaction and therefore must be transported away quickly for the reaction to continue.

Led by Yu Huang, a professor of materials science and engineering at UCLA Samueli School of Engineering and corresponding author of the study, the Huang Group was able to overcome several major obstacles to meet DOE requirements. First, the team dramatically accelerated the chemical reaction, greatly reducing the amount of costly platinum needed. In addition, the researchers found a way to quickly expel excess water from the reaction site.

According to the study’s first author, Zipeng Zhao, a postdoctoral fellow in Huang’s group, the key was shaping the nanoscale details of the carbon-support surface to achieve the perfect ratio of the oxygen inflow to match the outflow of water byproduct to maximize the reaction rate.

“Atomically speaking, this is sort of like designing freeway on-ramps and off-ramps for the ideal flow of traffic,” Huang said. “For the ideal fuel cell, we need our incoming traffic of hydrogen and oxygen to merge, and then following their reaction to produce electricity, we need to push the water out as fast as we can. We accomplished this by building upon our previous work and focusing on the overall microenvironment where the reaction takes place. The result is outstanding at an efficiency level where industry can now start to explore adopting this technology.”

A member of the California NanoSystems Institute at UCLA, Huang has led research to improve fuel cells for many years, including changing their shape to dramatically reduce the amount of platinum needed to catalyze the reaction and creating new nanoscale structures to improve efficiency.

Huang’s most recent work, which started in her lab from scratch, focused on fine-tuning the surface of carbon-support structures where the reaction occurs. While the platinum itself catalyzes the reaction, it only takes up a tenth of space compared to its surrounding carbon. This means that most of the time, the hydrogen and oxygen gases, and the resulting water vapor, are near the carbon surface.

“The most challenging part of the study is that we need to have a solid and reliable benchmark to measure our progress,” Huang said “We spent nearly two years in developing a set of highly reproducible engineering techniques and optimized protocols for preparing a fuel cell. This allowed us to study the scientific aspect of the catalyst layer and get a solid conclusion.”

The other challenge was to obtain an atomic-level understanding of why the modifications made at UCLA worked so well as a basis of continued improvements. To do this, Huang turned to her longtime collaborator William A. Goddard III — Caltech’s Charles and Mary Ferkel Professor of Chemistry, Materials Science, and Applied Physics — to perform molecular dynamics simulations to zero-in on the ideal microenvironment.

“My group has several research projects with Yu, but this one was easier than most because Yu’s group had done a series of experiments showing that the carbon support for the Pt nanopartical (NP) catalyst needed to have exactly the right amount of oxygen at the carbon surface — too much or too little would have been much worse,” Goddard said. “Now we can use this atomistic model as the basis for testing new variations computationally before the experiments. This sets the stage for a machine-learning approach to discover new combinations of materials that might be much better.”

Other authors on the study are from the Hong Kong University of Science and Technology, Ford Motor Company, Lawrence Berkeley National Laboratory, the National Synchotron Radiation Research Center in Taiwan, UC Riverside, UC Irvine, UC Santa Cruz and the UCLA Department of Chemistry and Biochemistry.

The research was supported by the Office of Naval Research with additional support from the National Science Foundation. UCLA has filed for a patent on the technology.