by Duke University School of Nursing 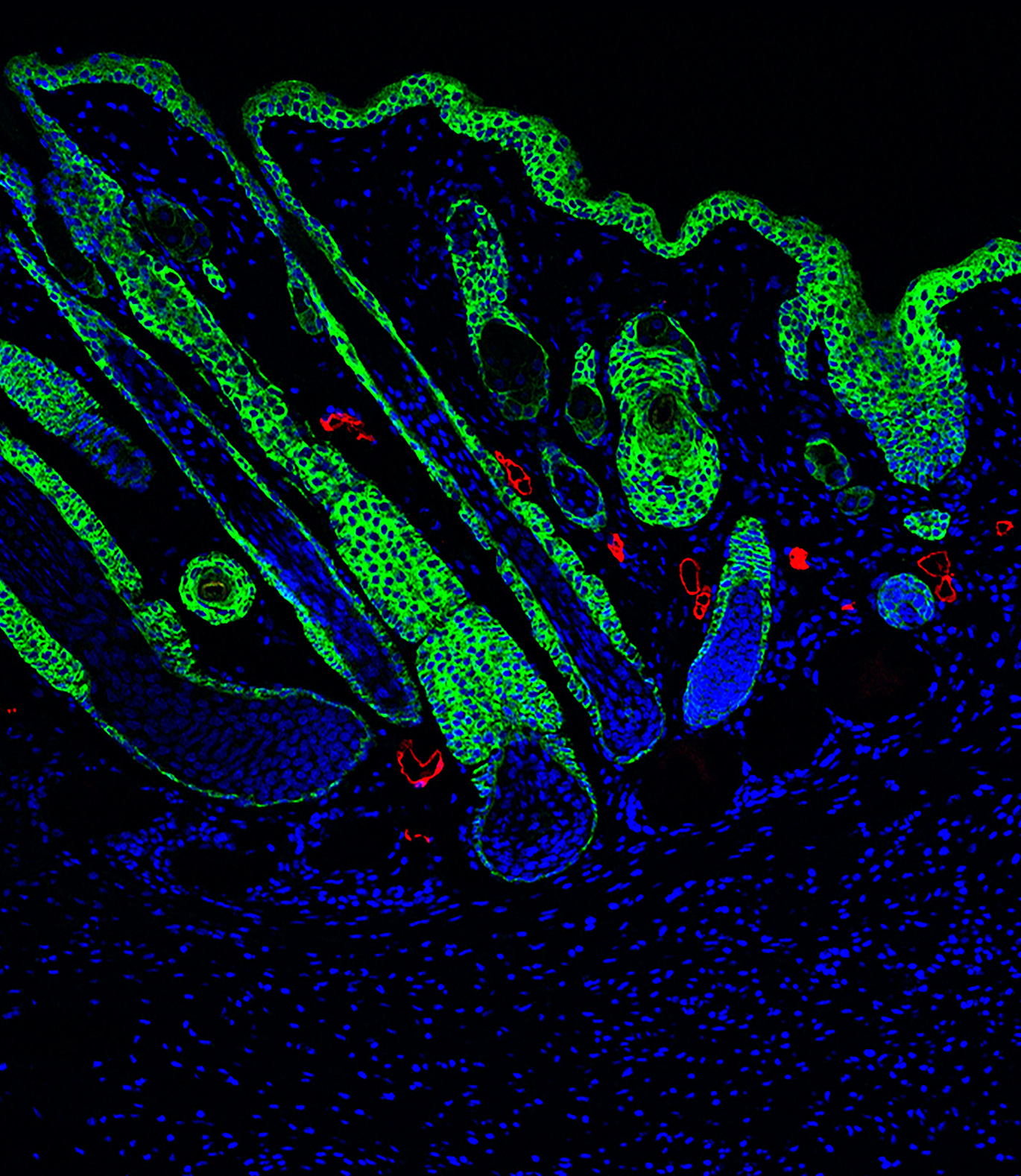 Regenerated hair follicles at the center of a wound. The hair follicles appear as tear drop structures, and they have Keratin 5 positive tips, which appear in green. (Photo credit: Tatiana Segura Lab, Duke University)

This article was originally published by Phys.org

Researchers at Duke University and the University of California, Los Angeles, have developed a biomaterial that significantly reduces scar formation after wounding, leading to more effective skin healing. This new material, which quickly degrades once the wound has closed, demonstrates that activating an adaptive immune response can trigger regenerative wound healing, leaving behind stronger and healthier healed skin.

This work builds on the team’s previous research with hydrogel scaffolds, which create a structure to support tissue growth, accelerating wound healing. In their new study, the team showed that a modified version of this hydrogel activates a regenerative immune response, which can potentially help heal skin injuries like burns, cuts, diabetic ulcers and other wounds that normally heal with significant scars that are more susceptible to reinjury.

This research appears online on November 9, 2020 in the journal Nature Materials.

“The body forms scar tissue as fast as possible to reduce the chance of infection, to reduce pain, and, in larger wounds, to avoid water loss through evaporation,” said Maani Archang, a first author on the paper and an MD/Ph.D. student in the Scumpia and Di Carlo labs at UCLA. “It’s a natural process of wound healing.”

Current wound-healing hydrogels available for clinical use sit on the surface of the wound, where they act as a dressing and help prevent the wound from drying out. That in turn helps the wound heal faster, generally via scar formation.

In their 2015 Nature Materials paper, the research team, helmed by Duke’s Tatiana Segura and UCLA’s Dino Di Carlo, developed microporous annealed particle (MAP) hydrogels, which are a microparticle-based biomaterial that can integrate into the wound rather than sit on the skin’s surface. The beads within the MAP gel link together but leave open spaces, creating a porous structure that provides a support for cells as they grow across the wound site. As the wound closes, the gel slowly dissolves, leaving behind healed skin.

Although the MAP hydrogels allowed for rapid cellular growth and faster repair, the team noticed that the healed skin had limited complex structures like hair follicles and sebaceous glands. The team was curious whether they could alter their biomaterial to improve the quality of the healed skin.

“Previously we’d seen that as the wound started to heal, the MAP gel started to lose porosity, which limited how the tissue could grow through the structure,” says Don Griffin, an assistant professor at the University of Virginia who is a first author on the paper and a former postdoctoral fellow in the Segura Lab. “We hypothesized that slowing down the degradation rate of the MAP scaffold would prevent the pores from closing and provide additional support to the tissue as it grows, which would improve the tissue’s quality.”

Rather than create an entirely new gel with new materials, the team instead focused on the chemical linker that allowed the scaffold to be naturally broken down by the body. In their original MAP gels, this chemical linker is composed of an amino acid sequence taken from the body’s own structural proteins and arranged in a chemical orientation called L chirality. Because this peptide sequence and orientation is common throughout the body, this helps the gel avoid triggering a strong immune response, but it also enables ready degradation through naturally present enzymes.

“Our body has evolved to recognize and degrade this amino acid structure, so we theorized that if we flipped the structure to its mirror image, which is D chirality, the body would have a harder time degrading the scaffold,” said Segura, a professor of biomedical engineering at Duke. “But when we put the hydrogel into a mouse wound, the updated gel ended up doing the exact opposite.”

The updated material integrated into the wound and supported the tissue as the wound closed. But instead of lasting longer, the team discovered that the new gel had almost entirely disappeared from the wound site, leaving behind just a few particles.

However, the healed skin turned out to be stronger and included complex skin structures that are typically absent in scars. After further investigation, the researchers discovered that the reason for the stronger healing—despite the lack of longevity—was a different immune response to the gel.

Because the original MAP gel was made with the common L peptide structure, it generated a mild innate immune response. But when the team placed the reformulated gel into a wound, the foreign D chirality activated the adaptive immune system, which created antibodies and activated cells including macrophages that targeted and cleared out the gel more quickly after the wound closed.

“This study shows us that activating the immune system can be used to tilt the balance of wound healing from tissue destruction and scar formation to tissue repair and skin regeneration,” said Segura.

Working with Maksim Plikus, a regenerative tissue expert at the University of California, Irvine, the team also confirmed that key structures, like hair follicles and sebaceous glands, were correctly forming over the scaffold. When the team dug into the mechanism, they found that the cells of the adaptive immune system are required for this regenerative response.

As the team continues to study the regenerative immune response to their gel, they are also exploring the possibility of using the new MAP hydrogel as an immunomodulatory platform. “The team is now exploring the best way to release immune signals from the gel to either induce skin regeneration or develop the hydrogel as a vaccine platform,” said Scumpia.

“I am excited about the possibility of designing materials that can directly interact with the immune system to support tissue regeneration” said Segura. “This is a new approach for us.”