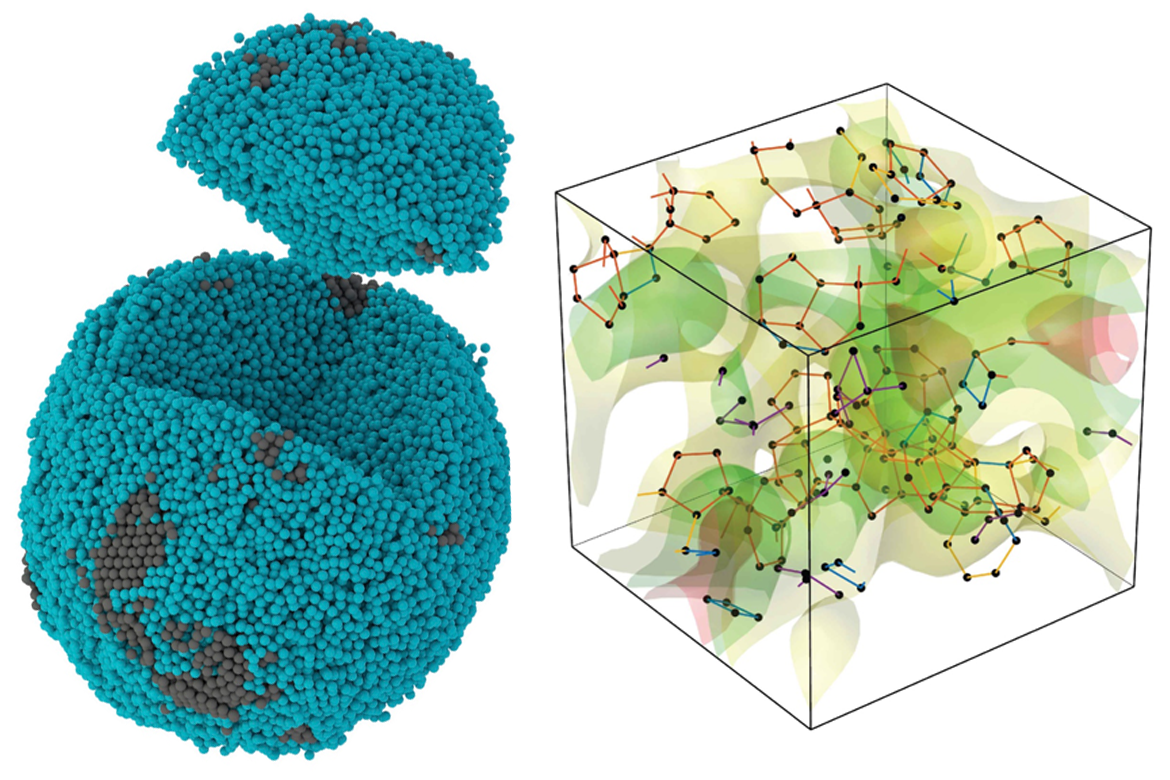 Experimental 3D atomic image of a tiny, noncrystalline palladium particle (left), in which the 10-sided pentagonal bipyramid (right) is the most prevalent motif for how atoms pack together; the orange lines represent the pentagonal bipyramid shape. (Image credit: Yakun Yuan and John Miao/UCLA).

Many substances around us, from table salt and sugar to most metals, are arranged into crystals. Because their molecules are laid out in an orderly, repetitive pattern, much is understood about their structure.

However, a far greater number of substances — including rubber, glass and most liquids — lack that fundamental order throughout, making it difficult to determine their molecular structure. To date, understanding of these amorphous substances has been based almost entirely on theoretical models and indirect experiments.

A UCLA-led research team is changing that. Using a method they developed to map atomic structure in three dimensions, the scientists have directly observed how atoms are packed in samples of amorphous materials. The findings, published today in Nature Materials, may force a rewrite of the conventional model and inform the design of future materials and devices using these substances.

“We believe this study is going to have a very important impact on the future understanding of amorphous solids and liquids — which are among the most abundant substances on Earth,” said the study’s senior author, Jianwei “John” Miao, a UCLA professor of physics and astronomy and a member of the California NanoSystems Institute at UCLA. “Understanding the fundamental structures may lead to dramatic advances in technology.”

Starting in 1952 with work by British physicist Frederick Charles Frank, the prevailing scientific understanding has been that atoms and molecules in a liquid or amorphous solid generally fit together into groups of 13. The model holds that they are configured with one central atom or molecule surrounded by the other 12 — two rings of five around the central particle, with another one capping the top and one capping the bottom.

To model how clumps of atoms or molecules could fit together at larger scales, scientists conceptualize this group of 13 as a 3D shape by treating each outer particle as a corner and connecting the dots, resulting in a solid with 20 triangular faces, called an icosahedron, a shape familiar to any Dungeons & Dragons player in the form of a 20-sided die.

Miao and his colleagues found something different, though.

The team analyzed three amorphous metallic objects using atomic electron tomography. This a powerful imaging method beams electrons at a sample and measures the electrons as they pass through, capturing data multiple times as the sample is rotated so that computer algorithms can construct a 3D image.

The researchers discovered that only a very small fraction of the atoms formed icosahedral groups of 13. Rather, the most commonly seen arrangement was groups of seven, with five in one central layer, one on top, one on the bottom and no central atom — a shape the researchers describe as a pentagonal bipyramid, having 10 triangular faces. They also observed that these pentagonal bipyramids formed into networks in which edges were often shared.

“Since Frank’s paper, the scientific community has believed icosahedral order is the most important structural motif in liquids or amorphous solids,” Miao said. “But so far, nobody else has been able to map out the position of all the atoms and check. We found the pentagonal bipyramid is the most prevalent motif. Nature seems to prefer to combine in sevens.”

The predominance of that combination was consistent across the samples studied by the researchers, who, for simplicity’s sake, selected materials that exist as single atoms at their fundamental scale. The materials examined were a thin film made from tantalum, which is a rare metal used for electronic components, and two nanoparticles made from palladium, a metal important for the catalytic converters that render automobile exhaust less toxic.

The team also used their experimental data as the basis for a computer simulation of what happens when tantalum is melted then quickly cooled so that crystals don’t form, resulting in what’s called a metallic glass. In the simulation, the atoms of tantalum similarly packed into networks of pentagonal bipyramids more often than any other shape, both as a liquid and a glass.

These findings may prompt a reconsideration of certain aspects of science’s physical model for the world around us. And because amorphous materials are integrated into certain semiconductors and numerous devices, including solar panels, this research could be an early step to replacing trial and error with purposeful design where these materials are involved.

“This work, along with our recent Nature paper on noncrystalline materials, may be comparable in influence to the first time that science revealed the 3D atomic structure of salt crystals over a century ago,” Miao said.