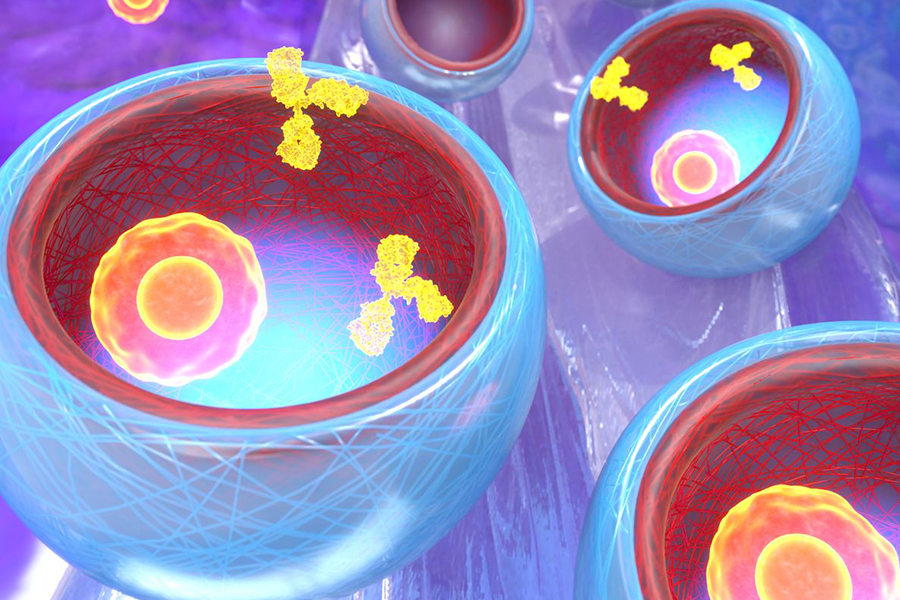 UCLA scientists have devised a method for producing intricately shaped hydrogel microparticles at a rate of more than 40 million per hour — at least 10 times faster than the current standard approach.

Hydrogel microparticles hold promise for a range of uses in biomedicine, including for repairing tissue, acting as miniature versions of petri dishes for growing cells, and as vehicles for delivering therapeutic drugs. And when they’re shaped like bowls or hollow shells, such particles can be particularly useful for capturing, partitioning off and analyzing individual cells or cell colonies, as part of the process for creating protein-based medicines, or culturing microalgae for sustainable biofuels.

The researchers produced millions of nanoliter-sized droplets — a nanoliter is one billionth of a liter — each containing hydrogel building blocks using microfluidic devices that dripped tens of thousands of droplets every second in parallel.

Normally, microfluidic devices used to produce shaped hydrogel particles can only operate one at a time because the ingredients used to make the particles don’t mix well; as a result, the ingredients have to be flowed together at precise rates to include them at the right ratios in the formed droplet. In the study, scientists were able to run hundreds of microfluidic devices in parallel because they devised a method to combine all of the ingredients at the right ratios into a single mixed solution. After forming droplets of the solution, the researchers cooled them, causing the components to separate out within the droplets and then assemble into the desired shapes. The scientists then froze the shapes in place by polymerizing them using ultraviolet light.

The ability to efficiently produce millions of bowl-shaped or hollow hydrogel particles could help speed up scientific research in a range of disciplines, including speeding the pace of developing new drugs or diagnostics, or producing new cell strains for the production of fuels or nutrients.

Sohyung Lee, a UCLA doctoral student in chemical engineering, is the study’s first author. The corresponding author is Dino Di Carlo, a professor of bioengineering and of mechanical and aerospace engineering at the UCLA Samueli School of Engineering, and a member of the California NanoSystems Institute at UCLA. Other authors are UCLA graduate students Joseph de Rutte, Robert Dimatteo and Doyeon Koo.

The technique described in the paper has been commercialized by Partillion Bioscience, a startup in the Magnify incubator at the NanoSystems Institute. Partillion was co-founded by de Rutte, one of the study’s authors.

The study is published online in the journal ACS Nano.