Advance shows promise as an alternative treatment for antibiotic-resistant infections 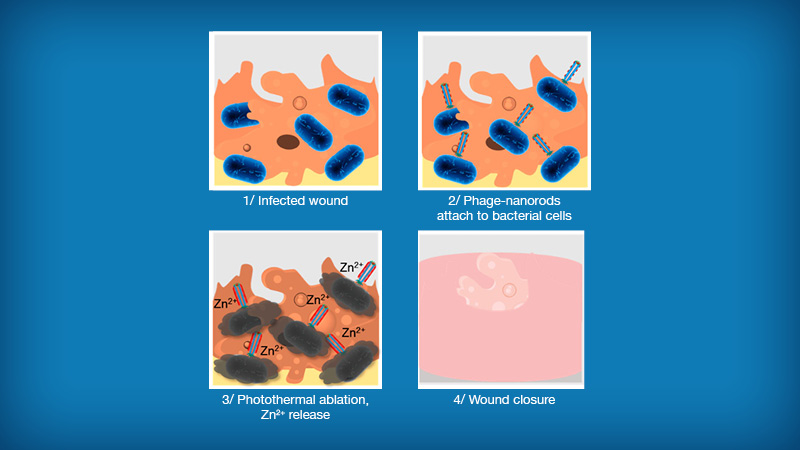 Bacterial infections are becoming increasingly difficult to treat due to antibiotic resistance built up by bacteria as they evolve and adapt to medication. UCLA biomolecular engineers and their colleagues are developing an alternative therapy to treat wound infections using phages — viruses that infect bacteria — to kill bacteria resistant to antibiotics.

The research team showed that the technique, previously demonstrated under in vitro conditions, also works in mice and is well tolerated. A study detailing their new findings was published in the American Chemical Society journal ACS Nano. The therapy is currently in preclinical stages.

Since the introduction of penicillin, the first group of antibiotics, to treat bacterial infections in the 1940s, antibiotics have saved millions of lives. They interfere with bacteria’s ability to properly reproduce, stifling their vital functions or wrecking their physical structure. However, infections have been increasingly difficult to treat with the rise of antibiotic-resistant strains of bacteria.

“Phage therapy has reemerged as a promising and critical alternative to traditional antibiotics,” said the study’s principal investigator Dr. Irene Chen, who earned her medical degree at Harvard Medical School and MIT, and is an associate professor of chemical and biomolecular engineering at the UCLA Samueli School of Engineering. “Phages are common in nature and are essentially viruses that infect bacteria instead of other organisms. They latch onto the host bacteria’s cell wall, then inject genetic material for replication, killing or at least slowing the growth of the bacteria.”

The potential of using phages for treatment of wound infections has been considered for more than 100 years. But a few concerns previously held back further research. These include inconsistent effectiveness, safety concerns, the potential for phages to transfer antibiotic-resistant genes into the host bacteria, as well as other potential evolutionary effects on bacteria that could render them more difficult to suppress.

To work around those challenges, the UCLA researchers combined phages with nanoscale rods of gold. These nanoparticle-phage combinations first attach themselves to the cell walls of host bacteria. Using near-infrared light, the researchers then heat up the gold rods and rupture the bacteria on the wound, killing them within 15 minutes. The phages are also destroyed in the process, eliminating the potential transfer of undesired genetic material.

This latest study in mice showed that the nanoparticle-phage therapy was effective on wounds infected with Pseudomonas aeruginosa bacteria. The phage nanoparticles survived long enough to treat the infection in an animal and did not appear to produce toxicity or other adverse side effects.

The researchers will now focus on expanding the range of infections that could be treated using the nanoparticle-phage therapy.

Chen, who also holds a joint appointment in the Department of Chemistry & Biochemistry at UCLA, directs a research group that studies biochemical systems to understand their fundamental properties and address emerging challenges in biotechnology and infectious disease.

Former UCLA chemical and biomolecular engineering postdoctoral scholar Huan Peng is the study’s first author. He recently joined the Huazhong University of Science and Technology in China as an associate professor. Other authors on the study are doctoral student Daniele Rossetto and professor Sheref Mansy of the University of Alberta in Edmonton, Canada; and project scientist Dr. Maria Jordan and Adjunct Professor Emeritus Kenneth Roos — both from the David Geffen School of Medicine’s Department of Physiology at UCLA.

The research was supported by the National Institute of General Medical Sciences, which is part of the National Institutes of Health; the Camille Dreyfus Teacher-Scholar Awards Program; the Simons Foundation; and the Natural Sciences and Engineering Research Council of Canada. A portion of the study utilized instruments at the California NanoSystems Institute at UCLA.

Patents on the technology have been filed by the UC Santa Barbara Technology & Industry Alliances and the UCLA Technology Development Group.