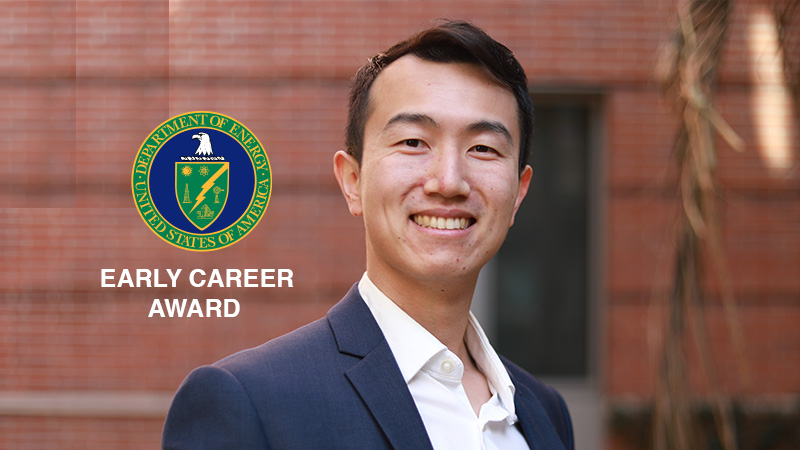 Yuzhang Li, an assistant professor of chemical and biomolecular engineering at the UCLA Samueli School of Engineering, has received an early career research award from the U.S. Department of Energy. (Image Credit: UCLA Samueli)

Yuzhang Li, an assistant professor of chemical and biomolecular engineering at the UCLA Samueli School of Engineering, has received an Early Career Research Award from the U.S. Department of Energy (DOE). The award will support his research on discovering the atom-scale processes that govern how lithium batteries work, with an eye toward designing safer, more efficient and longer-lasting batteries.

Specifically, Li will develop advanced imaging techniques using the cryogenic electron microscope facility at the California NanoSystems Institute at UCLA. Such techniques will allow researchers to zoom in on the nanoscale liquid-solid interfaces inside batteries with unprecedented detail, mapping out what goes on electronically and ionically, and showing those actions in slow motion down to thousandths of a second. Information gained from the study could then be correlated with how a battery performs. Such knowledge could offer new pathways to develop batteries that store more energy, deliver more power and are safer to use than existing batteries made with the most state-of-the-art technologies.

Beyond battery research, the techniques developed could be adapted to other fields of study, such as biology and chemistry, in which liquid-solid interfaces affect nanoscale processes.

Li, who joined UCLA in 2020, was one of 83 scientists from across the country selected to receive the award. All of the proposed research projects align with the DOE’s eight major program offices — Li’s project was selected by the DOE’s Office of Basic Energy Sciences.

This is Li’s third early career award that he has received in the past year. His other accolades include the National Science Foundation’s CAREER Award in support of his lithium battery research and a doctoral new investigator grant from the American Chemical Society Petroleum Research Fund to support research into natural gas storage and distribution.