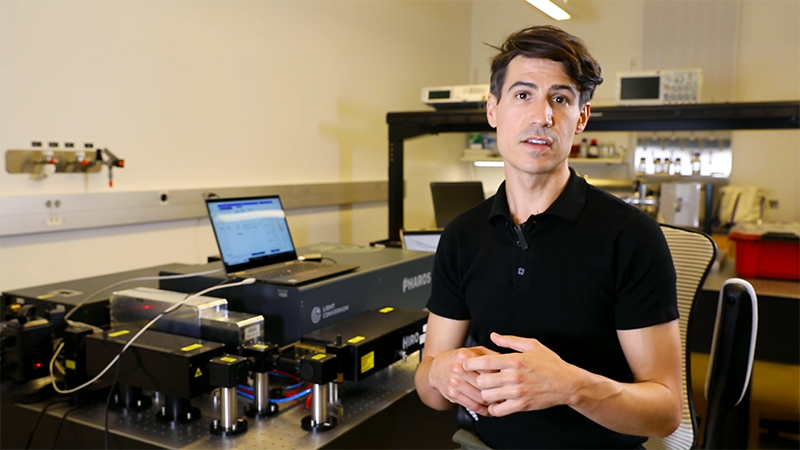 A physicist at Morehouse College in Atlanta and an engineer at the UCLA Samueli School of Engineering have received a three-year, $798,000 grant from the National Science Foundation for research in quantum electrodynamics, coupled with a leadership and trainee plan focusing on increasing access for students who are from populations that are historically underrepresented in science, technology, engineering and mathematics.

The grant will support the development of new techniques that can see and measure light waves precisely as they interact with each other and with molecules and individual atoms. The researchers aim to achieve such interactions at attosecond timescales — a quintillionth (one-billionth of one-billionth) of a second. These are where some of the fastest, most elusive quantum phenomena occur, which in turn determine functional material properties.

The principal investigator of the project is Wesley Sims, an assistant professor of physics at Morehouse and director of the Micro/Nano Optics Research and Engineering Laboratory. The co-principal investigator is Sergio Carbajo, a UCLA Samueli assistant professor of electrical and computer engineering and director of the Quantum Light-Matter Cooperative (Q-LMC) Carbajo also holds faculty appointments at UCLA’s Department of Physics & Astronomy and with the Linac Coherent Light Source at SLAC National Accelerator Laboratory, which is managed by Stanford University and is part of the Q-LMC consortium.

“I am extremely humbled and excited to receive this award from the National Science Foundation,” Sims said. “Not only does it grant me the opportunity to increase research capacity at Morehouse College, but the collaborative approach with other institutions will prepare our students for graduate-level rigor and build a quantum-focused network that will provide many opportunities for them.”

Through this project, the team seeks to verify emerging theories on the quantum nature of how light interacts with matter, from solids to liquids to gases. The findings could also have broader impacts on a range of fields — including molecular physics, optics and particle physics — and may lead to next-generation sensors for quantum phenomena.

“This NSF grant will allow our group to explore some exciting and novel concepts in quantum sensing, with an uncompromising commitment to include and expand the participation of underrepresented students in physics and engineering,” said Carbajo, who is the faculty director of equity, diversity and inclusion at UCLA Samueli’s Electrical and Computer Engineering Department.

Funded by the NSF’s Office of Multidisciplinary Activities and its Historically Black Colleges and Universities (HBCU) Undergraduate Program, the grant will enhance current efforts across the two institutions to support underrepresented undergraduate and graduate students. Morehouse College is one of the nation’s oldest HBCUs.

Carbajo joined UCLA Samueli in 2021 as part of the school’s Mentor Professor Program, an initiative designed to recruit faculty who are not only experts in their fields but also excel in mentoring students from underrepresented and underserved populations. He is the founder and director of UCLA’s Queered Science and Technology Center, which focuses on closing the gap between finding scientific solutions to societal challenges and the inequitable impact such solutions may have on underserved communities.