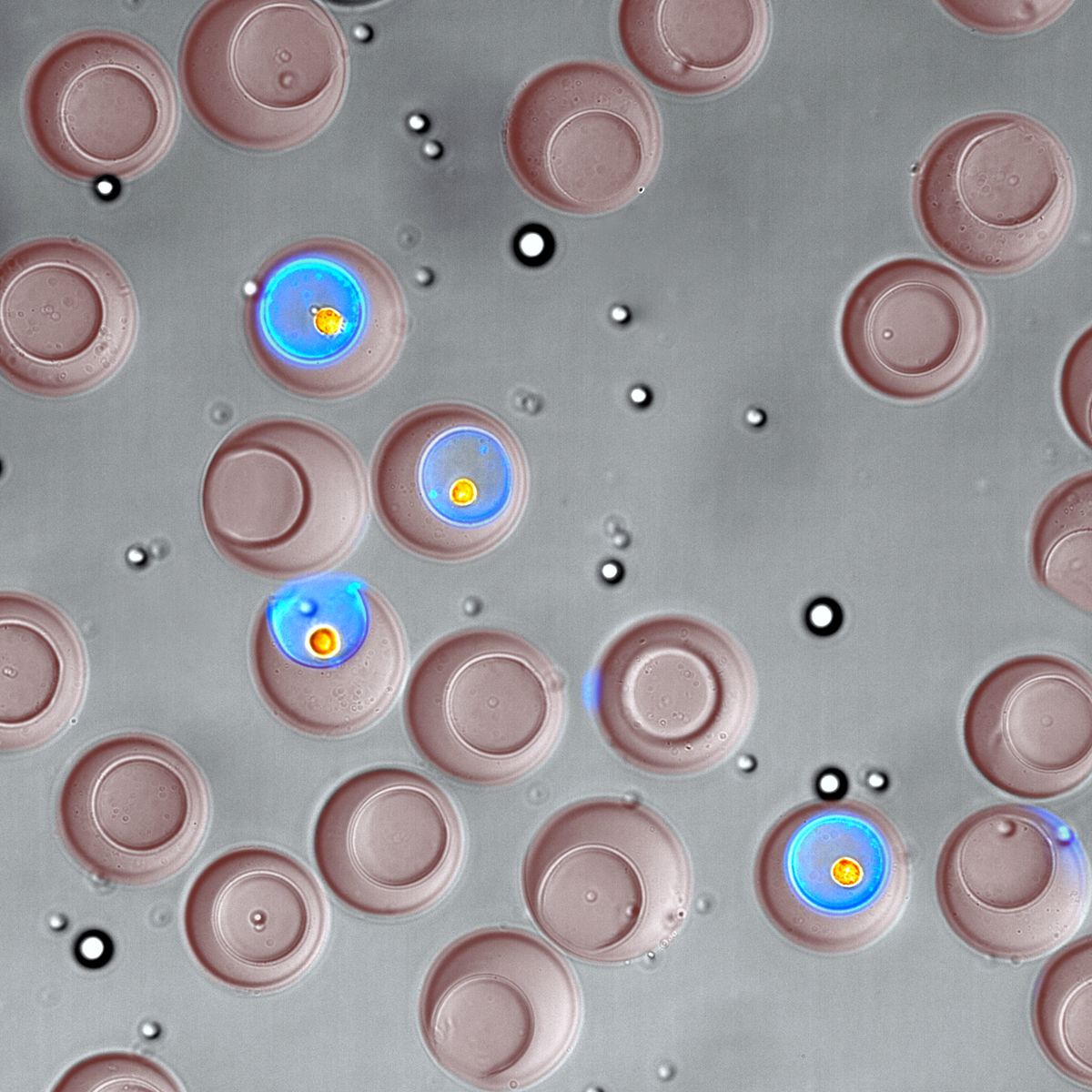 Using microscopic, bowl-shaped containers called nanovials (the larger, reddish-brown objects), enabled researchers to select cells based on what type they are and which compounds they secrete (shown here here in blue). (Image courtesy: Joseph de Rutte/UCLA)

For nearly 40 years, drugmakers have used genetically engineered cells as tiny drug factories. Such cells can be programmed to secrete compounds that yield drugs used to treat cancer and autoimmune conditions such as arthritis.

Efforts to develop and manufacture new biologic treatments may gain from a new technology for quickly sorting single, live cells in a standard laboratory setup. With microscopic, bowl-shaped hydrogel containers called “nanovials,” a UCLA-led research team recently demonstrated the ability to select cells based on what type they are, and which compounds — and how much of those compounds — they secrete. The study was published in the journal ACS Nano.

“With this technology, the scientific community can uncover new insights into key biological processes that represent a huge fraction of our protein-coding genes,” said Dino Di Carlo, the study’s corresponding author and the Armond and Elena Hairapetian Professor of Engineering and Medicine at the UCLA Samueli School of Engineering. “I think of the single cell as the quantum limit of biology. The nanovial is the evolution of the Petri dish to that fundamental limit of one cell.”

Di Carlo, who also is a member of the California NanoSystems Institute at UCLA and the UCLA Jonsson Comprehensive Cancer Center, said using nanovials helps scientists overcome the limitations of other instruments for measuring cell secretions.

The more common technique uses a grid of tiny plastic containers called a microwell plate, but that approach lacks the nanovial’s ability to sort single cells, and the current technology typically requires weeks for enough cells to grow that secretions can be detected. The other alternative is a multimillion-dollar instrument, found in only a few dozen labs worldwide, that measures the secretions of about 10,000 cells per experiment and can sort live cells.

Compared to that instrument, nanovials can be used to perform much larger screenings — in the millions of cells — at a small fraction of the relative cost — less than one cent per cell, versus $1 or more per cell using the current standard.

Nanovials are so tiny that it would take 20 million of them to fill a teaspoon. They are customized to capture specific types of cells, and can be augmented with molecules that attach to a cell’s secretions and glow under colored light. Because nanovials are made from a hydrogel — a polymer that holds almost 20 times its mass in water — they provide a wet environment relatively similar to cells’ natural homes.

In the study, researchers examined cells that had been engineered to secrete a particular antibody drug. Using nanovials and a common analytical device called a flow cytometer, they selected cells that secreted the most of that antibody, and then grew those cells into colonies that produced over 25% more of the drug than colonies that had not been specially selected.

The ability to produce antibody drugs with that increased efficiency could reduce the cost of drug production by a similar percentage, Di Carlo said.

The scientists also showed that they could pick out rare antibody-secreting cells that bound specifically to a target molecule, and could identify the DNA sequence information of the secreted antibody. That experiment, a key part of discovering new antibody drugs, took one day; traditional methods would take weeks.

The investigators are currently using nanovials to study immune cells called T cells, which are used in cell therapies, as well as to explore little-understood biological phenomena. Nanovial technology also is the basis for a startup company, Partillion Bioscience, that is based on the UCLA campus at CNSI’s Magnify incubator.

“We are excited to see the impact nanovials will have for biological research now that they are available for anyone to use,” said Joseph de Rutte, the paper’s co-first author, who earned a doctorate from UCLA in 2020 and is a co-founder and president of Partillion.

The study was supported by the National Institutes of Health, the Maryland Stem Cell Research Fund and the Simons Foundation.