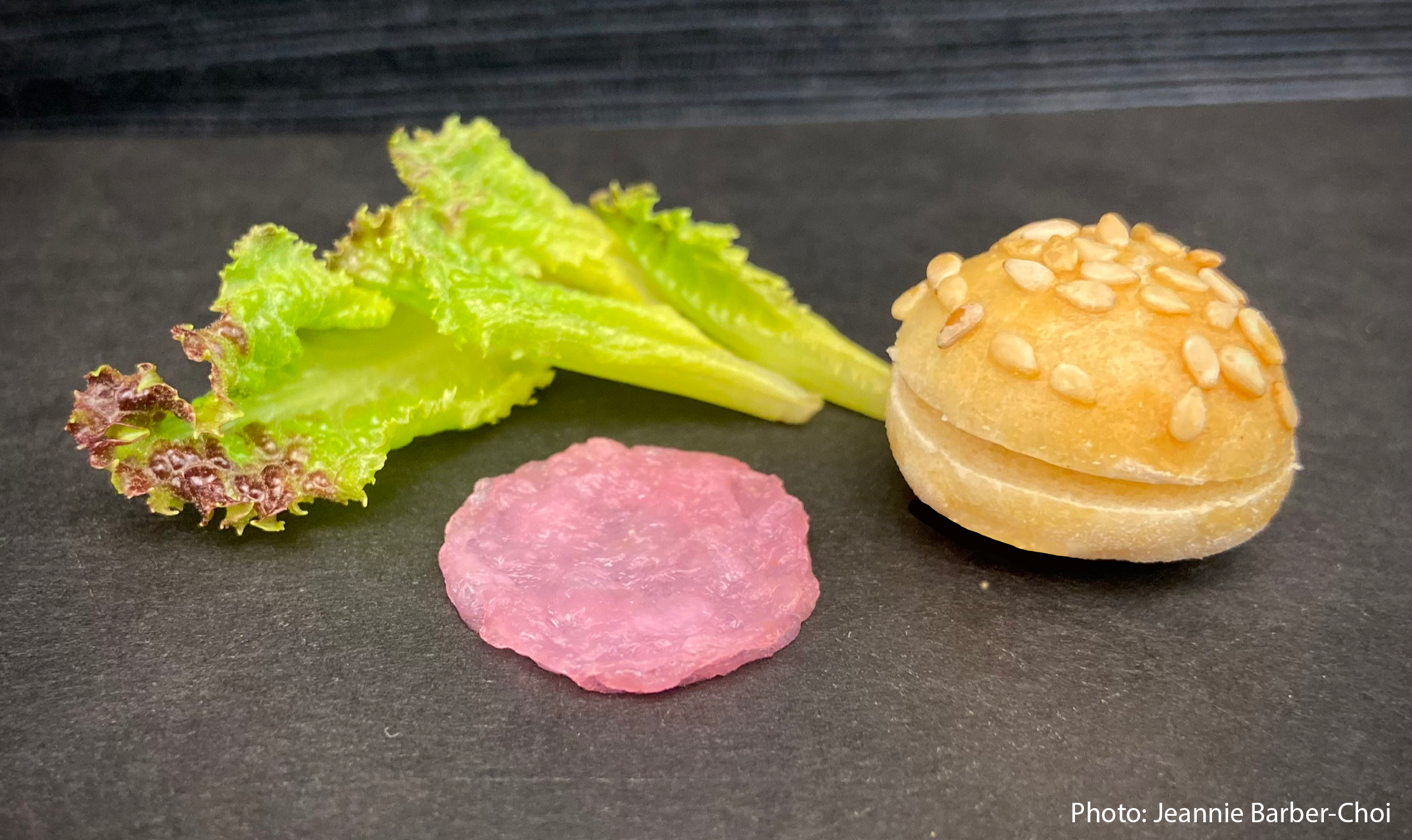 After earning her undergraduate degree, Amy Rowat found herself at a fork in the road. Should she follow her love of science to graduate school for physics, or her passion for cooking to culinary school?

At the time, academia won out. But over the long term, she’s answered the “science or food” question her own way: Why not both?

Now an associate professor of integrative biology and physiology and the holder of UCLA’s Marcie H. Rothman Presidential Chair in Food Studies, Rowat has spiced up both her pedagogy and her research with her gastronomic interests. She is founding director of Science and Food, a campus-based organization that promotes knowledge of science through food and food through science. And in recent years, her research in mechanical biology — exploring how physical forces affect cells — has included studies into cultured meat that may help to eventually add labmade steaks to the grocer’s shelves.

She views that scientific endeavor, aided by the tailwind of private philanthropy, federal research grants and her membership in the California NanoSystems Institute at UCLA, as an aspect of a broader research mission.

“Very broadly, our work is driven by the desire to advance both human and planetary health,” Rowat said. “When I realized there was a gap in the field of alternative proteins, my skillset and the expertise of my lab in biophysics, engineering, cell biology and mechanical biology seemed like a strong fit.”

She points to one of many deleterious effects of the COVID-19 pandemic, disruptions to the supply chain sometimes rendering household staples hard to find, as an example of why expanding the menu of protein-rich foods would benefit society.

“Having other methods to produce animal protein can help increase the resilience of our food system,” she said.

Although there are a number of problems to be solved along the way, cultured meat has the potential to cause less greenhouse gas emission, reduce antibiotic use and occupy less land pound-for-pound than traditional meat from livestock.

“I see cultured meat as a complement to other solutions, such as regenerative agriculture,” Rowat said. “An important aspect is simply to have these alternative protein sources out there.” 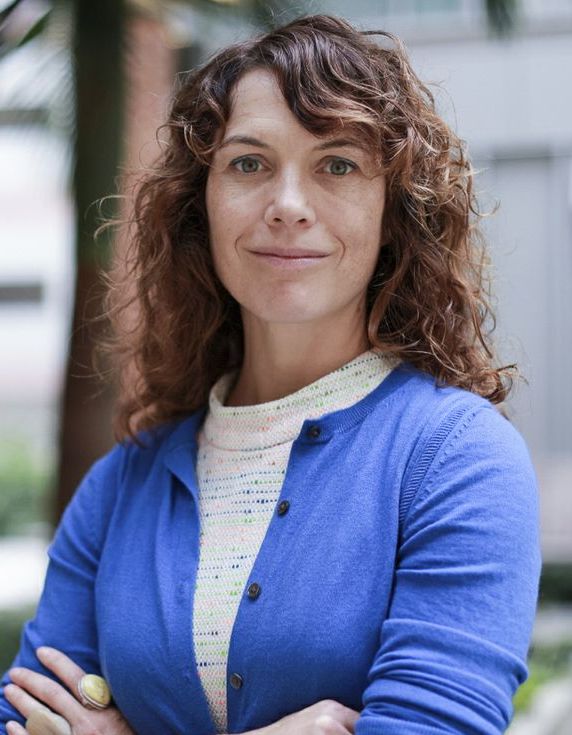 Cultured chicken nuggets are already obtainable in Singapore. With similar products working their way through U.S. regulatory processes, Rowat predicts that cultured meat may be available for sale stateside in the next year and a half. Of course, it remains to be seen whether it will find widespread adoption, as plant-based meat alternatives have, or occupy a niche such as feeding people living in extreme environments.

The ability to grow cells in labs is nothing new. However, the cost and the challenges involved with production for consumption at consumer scale have been substantial obstacles. In her research, Rowat is looking for methods that add efficiency to the processes behind cultured meat.

A study she led appearing in the August 2022 edition of the journal Biomaterials signals a step forward for the effort.

Rowat and her colleagues take on a fundamental limitation, that animal cells require some sort of scaffold to grow on if they’re going to develop and function properly. But the petri dish won’t do the trick at industrial scale. Rather, the instrument for the job is a large vat called a bioreactor. To date, cultured meat has been grown on tiny beads, called microcarriers, made of inedible polymers. They must later be separated from the cells, increasing cost and cutting into efficiency.

In the paper, the UCLA team presents a process for making edible microcarriers from gelatin and a food-grade enzyme. Because muscle stem cells have been shown to grow more readily on grooved surfaces — similar to the texture of skeletal muscle — the researchers also describe a technique for patterning their microcarriers. In a proof-of-concept experiment, they cultured cow muscle cells, harvested them into a patty and cooked it with olive oil until browned.

Two resources connected to the CNSI played important roles in the study.

The team made their grooved microcarriers at the UCLA NanoLab, a cleanroom facility for the fabrication of devices that reach down into the scale of billionths of a meter. To measure the mechanical properties of the microcarriers, and confirm the 3D shapes of the grooved ones, the scientists used instruments at the Nano and Pico Characterization Laboratory, a CNSI Technology Center. 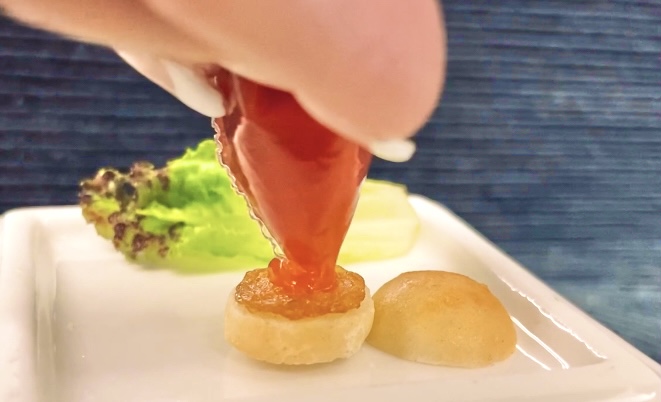 The study also benefited from private support, through the Good Food Institute as well as the Noble Family Innovation Fund, a CNSI resource that backs research with potential to launch knowledge-driven commercial enterprises and benefit society.

That philanthropic assistance has borne fruit in more ways than one. Seed funding led to progress that helped attract major grants from the National Science Foundation and the Agriculture and Food Research Initiative of the U.S. Department of Agriculture’s National Institute of Food and Agriculture. And the Noble Fund award is backing experiments at another CNSI Technology Center, the Molecular Screening Shared Resource, which allows scientists to quickly test large libraries of molecules.

Rowat has previously worked with the MSSR on investigations toward fighting cancer; for her cultured meat investigations, the facility will enable her to screen a collection of food ingredients for the ability to aid in growing fat cells. This is the key to another ambition of Rowat’s: to create the capacity for a sumptuous cut of cultured steak shot through with flecks of fat.

“The holy grail in this work is to develop a piece of meat that is more spatially patterned, like a filet mignon, and marbled with fat,” she said. “Fat is really important for mouthfeel, for texture, for flavor and for nutrition.

“That’s the next frontier we’re working on now, and we’re grateful for the Noble Family Innovation Fund support. We’re excited for the next level of findings, which we think will make cultured meat more delicious and healthful.”