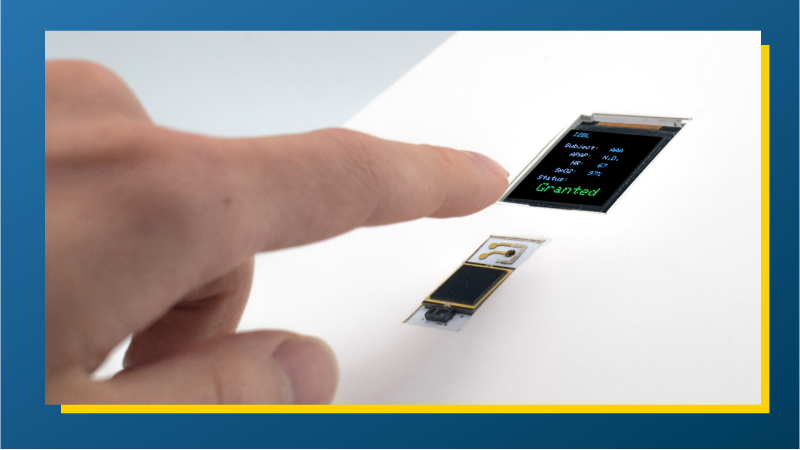 Researchers at UCLA and Stanford University have developed a secure, noninvasive, one-touch technology using hydrogel-coated chemical sensors and a signal-interpretation framework that can present detailed information about an individual’s blood composition — such as metabolites, hormones, nutrients and pharmaceuticals, as well as blood oxygen — all through the press of a finger.

The first-of-its-kind system builds on previous skin-sensing technologies developed by the researchers, and a paper describing the new technology has recently been published in Proceedings of the National Academy of Science (PNAS).

One potential application of the technology is to embed the sensors in steering wheels of keyless cars to measure blood alcohol and drug levels. This can help prevent driving under the influence (DUI) of drugs or alcohol that can impair a driver’s ability to operate a vehicle safely.

“This touch-based technology can serve as a human-machine interface to perceive and interpret what’s inside someone’s body,” said study leader and senior author Sam Emaminejad, an associate professor of electrical and computer engineering at the UCLA Samueli School of Engineering. “It provides much richer information about our health than current touch-based biosensors such as pulse oximeters.”

“This combines the familiarity of a fingerprint scan, such as the one that unlocks some smartphone models, with our advances in noninvasive diagnostics that can detect trace molecules circulating in our body that have been traditionally collected in samples of blood, saliva and other fluids,” said Emaminejad, who is also a member of the California NanoSystems Institute. “Importantly, it also can encrypt the data at the point of collection by leveraging the individual’s unique fingerprint as a key, so the collected data remain secure and private.”

For their experiments, the researchers developed thin hydrogel-coated sensors to measure ethanol and acetaminophen levels in the participants. They integrated these sensors with other biosensors and a fingerprint scanner and developed accompanying algorithms to decipher the information.

“The system authenticated the user before proceeding to the next steps,” said lead author Shuyu Lin, a UCLA doctoral student and member of Emaminejad’s Interconnected and Integrated Bioelectronics Lab (I²BL). “We also applied our interface to create a smart medication dispenser that dispenses only the appropriate amount of acetaminophen depending on current levels in the blood.”

The researchers envision that such interfaces could be extended and applied to create “smart” surroundings that adapt to individuals’ needs. In addition to incorporating the system into heavy machinery to ensure their operators are authorized and physically sound to operate the machines, the researchers said the technology could also be used for remote patient monitoring. When connected to a laptop or tablet, the system could relay real-time, detailed physiological information from a patient to a doctor during a video visit.

The other lead authors of the PNAS-published paper are Emaminejad’s graduate students and lab members Jialun Zhu and Wenzhuo Yu. Other UCLA authors from his lab include Bo Wang, Kiarash Sabet, Yichao Zhao, Xuanbing Cheng, Hannaneh Hojaiji, Haisong Lin and Jiawei Tan. The other senior authors are Dr. Carlos Milla, a professor of pediatrics at Stanford Medical School and Ronald Davis, a professor of biochemistry and genetics at Stanford University and director of the Stanford Genome Technology Center.

The research is supported by National Science Foundation’s Smart and Connected Health program, Precise Advanced Technologies and Health Systems for Underserved Populations (PATHS-UP), PhRMA Foundation, UCLA Samueli School of Engineering and a UCLA Electrical and Computer Engineering Preliminary Examination Fellowship to Shuyu Lin. The UCLA Technology Development Group has filed for a provisional U.S. patent on the technology for Emaminejad and the three lead authors.