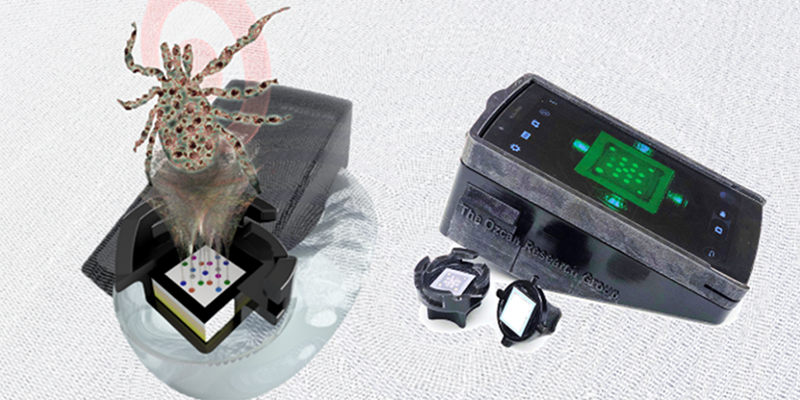 After a day hiking in the forest, the last thing a person wants to discover is a tick burrowing into their skin. Days after plucking off the bloodsucking insect, the hiker might develop a rash resembling a bull’s-eye, a tell-tale sign of Lyme disease. Yet not everybody who contracts Lyme disease gets the rash. Now, researchers reporting in ACS Nano have devised a blood test that quickly and sensitively diagnoses the disease at early stages.

About 300,000 cases of Lyme disease, which is caused by the tick-borne bacteria Borrelia burgdorferi, are diagnosed in the U.S. each year, according to the U.S. Centers for Disease Control and Prevention. Early symptoms of the disease include the characteristic skin rash, along with fever, headache, chills and muscle aches. If not treated promptly with antibiotics, more severe symptoms, such as facial palsy, nerve pain, heart palpitations and arthritis, can occur. However, 10–20% of infected people do not develop the rash, and existing diagnostic blood tests are slow, costly or insensitive at early stages, when treatment is most effective. Aydogan Ozcan and colleagues wanted to develop a fast, easy-to-use and inexpensive blood test to diagnose Lyme disease soon after infection.

The researchers built a handheld, paper-based device to detect antibodies against the B. burgdorferi bacteria in serum samples. The device included a sensing membrane that contained several spots covering seven bacterial antigens and a synthetic peptide. Antibodies from serum samples that attached to the spots were detected with a solution that changed color, depending on the amount of antibody captured. The researchers took pictures of the color changes on a smart phone, then analyzed all of the spots with a neural network they developed that could determine whether the sample was positive or negative for Lyme disease. When tested on 50 blood samples from people with or without early-stage Lyme disease, the assay had a specificity of 96.3% and a sensitivity of 85.7%. In addition to being much more sensitive than existing tests, the assay requires 15 minutes to complete and costs only 42 cents per test.

The authors acknowledge funding from the Steven and Alexandra Cohen Foundation.

The American Chemical Society, the world’s largest scientific society, is a nonprofit organization chartered by the U.S. Congress. ACS is a global leader in providing access to chemistry-related information and research through its multiple databases, peer-reviewed journals and scientific conferences. ACS does not conduct research, but publishes and publicizes peer-reviewed scientific studies. Its main offices are in Washington, D.C., and Columbus, Ohio.