100 times faster than current technology, equipment could speed discovery of medications for wide range of diseases 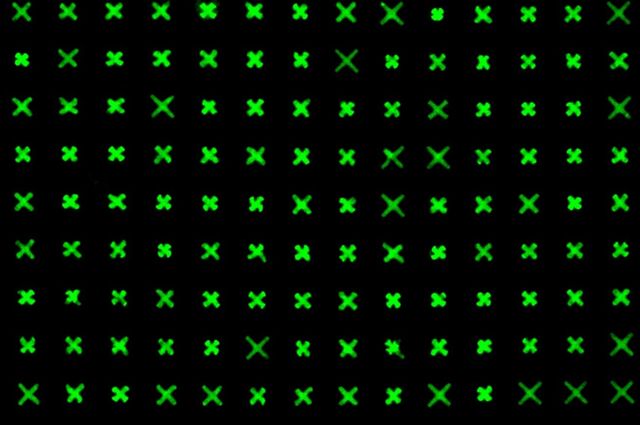 The device’s key component is a flexible plate with more than 100,000 uniformly spaced X-shaped micropatterns of proteins that cells can adhere to. (Image Credit: UCLA)

Engineers, doctors and scientists at UCLA and Rutgers University have developed a tool that measures the physical strength of individual cells 100 times faster than current technologies.

The new device could make it easier and faster to test and evaluate new drugs for diseases associated with abnormal levels of cell strength, including hypertension, asthma and muscular dystrophy. It could also open new avenues for biological research into cell force. It is the first high-throughput tool that can measure the strength of thousands of individual cells at a time.

“Our tool tracks how much force individual cells exert over time, and how they react when they are exposed to different compounds or drugs,” said Dino Di Carlo, professor of bioengineering at the UCLA Henry Samueli School of Engineering and Applied Science and the project’s principal investigator. “It’s like a microscopic fitness test for cells with thousands of parallel stations.”

The team’s work is described in Nature Biomedical Engineering.

Cells use physical force for essential biological functions — both as individual cells, for example in cell division or immune function, and as large groups of cells in tissue, for example, when muscles contract.

Disruptions in a cell’s ability to control the levels of force they exert can lead to diseases or loss of important bodily functions. For example, asthma is caused by the smooth muscle cells that line the airways squeezing more than normal. And abnormally weak cell forces are associated with heart failure, muscular dystrophy and migraine headaches.

“With this new tool, we can now test for potential therapeutics that can restore normal cellular force generation and therefore restore function to diseased tissues made of these cells,” said Di Carlo, who also is a professor of mechanical and aerospace engineering and is a member of UCLA’s California NanoSystems Institute.v

The device is called fluorescently labeled elastomeric contractible surfaces, or FLECS. Its key component is a flexible rectangular plate with more than 100,000 uniformly spaced X-shaped micropatterns of proteins that are sticky so cells settle on and attach to them.

The X’s embedded in the plate are elastic, so they shrink when the cells contract. The X’s are made fluorescent with a molecular marker to enable imaging and quantification of how much the shapes shrink.

“This technology is a game-changer for us drug discovery scientists,” said Robert Damoiseaux, a professor of molecular and medical pharmacology at the David Geffen School of Medicine at UCLA and a co-author of the study. “We now are able to screen directly for drugs that work on a cell’s ability to contract — drugs that could be used to treat conditions like asthma and stroke.”

Damoiseaux also said the approach automates the analysis of the results, which ensures that the evaluation of the strength of thousands and thousands of cells across hundreds of conditions happens in minutes. Current standard methods require human technicians to prepare samples and analyze data, so it can take hours to produce the same results for just a few cells.

The X pattern the researchers built into FLECS are just one option for how the plate can be configured. It can be adjusted to screen for a broad range of cell types by altering the patterns’ shapes, stiffness and molecular composition. 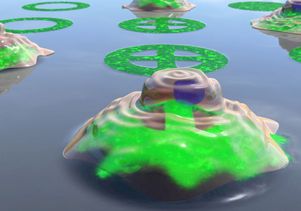 The study’s lead authors were Ivan Pushkarsky, a UCLA postdoctoral scholar in bioengineering, and Peter Tseng, who was a member of Di Carlo’s lab when the research was conducted. Tseng is now an assistant professor of electrical engineering and computer science at UC Irvine.

To test the tool, the researchers analyzed drugs that make cells either contract or relax, using human smooth muscle cells that line airways in the body — in effect, simulating an asthma attack in the lab. The researchers compared the results of those tests to what was already known about how lung tissue reacts to the drugs and found that FLECS captured the same types of reactions — only more precisely because it could analyze the reactions in cell-by-cell detail.

The researchers conducted additional testing to further demonstrate the device’s versatility and effectiveness. For example, they tested the force of macrophages, cells in the immune system that rid the body of potentially harmful particles, bacteria and dead cells. They found that when a typical macrophage receives a signal that an infection is present, it can exert force approximately 200,000 times its own weight in water. But some macrophages were more than three times stronger than that.

The researchers also used FLECS to analyze cell force and then compared the results of that test to a current standard test, which judges cell force by analyzing the amount of calcium in the cells. They were surprised that the results of the calcium test did not correlate well with how much cells contracted. The finding suggests that the calcium test may be limited, because — unlike that test — FLECS looks at a level of detail down to an individual cell.

“This finding has strong implications for safety evaluations of current drugs where unintended contraction of cells may lead to adverse reactions in patients,” said Damoiseaux, who is also director of CNSI’s Drug Discovery Technology Center.

Other UCLA authors were Lyndon Warfe, Dylan Black and Jonathan Lin, all members of Di Carlo’s research group; Dr. Philip Scumpia, a dermatologist at the Geffen School of Medicine; Sherie Morrison, professor of microbiology, immunology and molecular genetics; and researchers Ryan Trinh and Bryan France. In collaboration with researchers from the Rutgers Institute for Translational Science and Medicine the UCLA researchers found that individuals cells from people who had died from severe asthma contract with more force, both generally and during an asthma attack, than they do in healthy people.

The research was funded by a National Institutes of Health Director’s New Innovator Award and a David and Lucille Packard Fellowship, and by the UCLA Jonsson Comprehensive Cancer Center.