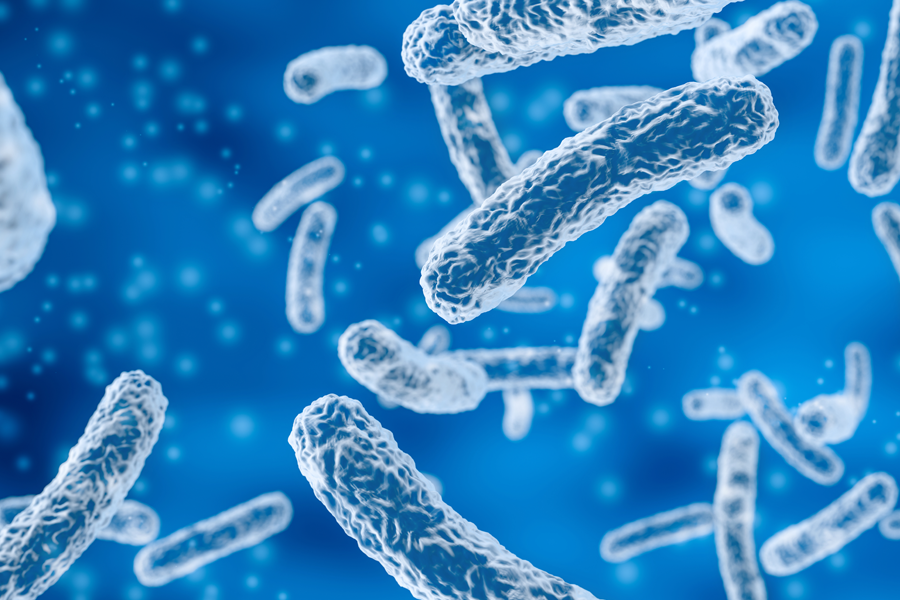 Scientists showed that the bacterium Pseudomonas aeruginosa (similar to the rod-shaped bacteria pictured above) communicate using chemical signals analagous to radio signals in order to help cells join together and form communities.

The thought of bacteria joining together to form a socially organized community capable of cooperation, competition and sophisticated communication might at first seem like the stuff of science fiction — or just plain gross.

But biofilm communities have important implications for human health, from causing illness to aiding digestion. And they play a role in a range of emerging technologies meant to protect the environment and generate clean energy.

New UCLA-led research could give scientists insights that will help them cultivate useful microbes or clear dangerous ones from surfaces where biofilms have formed — including on tissues and organs in the human body. The study, published in the Proceedings of the National Academies of Science, describes how, when biofilms form, bacteria communicate with their descendants using a chemical signal analogous to radio transmissions.

The investigators showed that concentration levels of a messenger molecule called cyclic diguanylate, or c-di-GMP, can increase and decrease in well-defined patterns over time, and across generations of bacteria. Bacteria cells employ those chemical signal waves, the study found, to encode information for their descendants that helps coordinate colony formation.

In that phenomenon, whether a given cell attaches to a surface is influenced by the specific shape of those oscillations — much like the way information is stored in AM and FM radio waves.

“Because these oscillations orchestrate what the entire lineage does, a large number of cells are controlled at the same time with these signals,” said corresponding author Gerard Wong, a professor of bioengineering at the UCLA Samueli School of Engineering and of chemistry and biochemistry at the UCLA College, and a member of the California NanoSystems Institute at UCLA. “That means we potentially have a new knob to control or fine-tune biofilm formation, which works like mass communications for bacteria.”

Stopping the formation of biofilms could be lifesaving in certain scenarios, such as countering the infections coating the lining of the lungs in people with cystic fibrosis.

In other situations, enhancing the ability to cultivate biofilms would be helpful — fortifying colonies of “good” bacteria in the human gut to help with digestion, for example, or to protect people from disease-causing microbes. And scientists and engineers, including several at UCLA, are working to develop bacterial biofilms that can break down plastic, eat industrial waste or even generate electricity in a fuel cell.

The study adds new dimensions to the scientific understanding of the mechanisms that lead to biofilms. The current paradigm, established over the last 20 years or so, holds that when a bacterium senses a surface, that cell begins producing c-di-GMP, which in turn causes the bacterium to attach to the surface. Indeed, biofilm cells generally have higher levels of c-di-GMP than bacterial cells that move around a lot.

Biofilm research focusing on bacteria’s ability to communicate from one generation to another was pioneered by first author Calvin Lee, a UCLA postdoctoral researcher, along with Wong and their teammates, in a 2018 publication. In the current study, the team elucidates how bacteria communicate about the existence of a surface using c-di-GMP signals: Signal waves of different heights and different frequencies can be transmitted by a cell to its descendants.

With analysis techniques typically used in big data and artificial intelligence, the researchers identified three important factors that control the formation of biofilm: average levels of c-di-GMP, the frequency of oscillations in c-di-GMP levels, and the degree of cell movement on the surface where the biofilm is forming.

“The existing paradigm is that one input produces one output, with increasing levels of the signal leading to biofilm formation,” Lee said. “We’re proposing that multiple inputs eventually lead to that same output, and that bacteria can leave long-lasting messages for their offspring. You need to look at more things in order to get the full picture.”

Other co-authors of the study are graduate students William Schmidt and Jonathan Chen of UCLA, and graduate student Shanice Webster and professor George O’Toole of Dartmouth College.

The study was supported by the National Institutes of Health, the Army Research Office and the National Science Foundation.