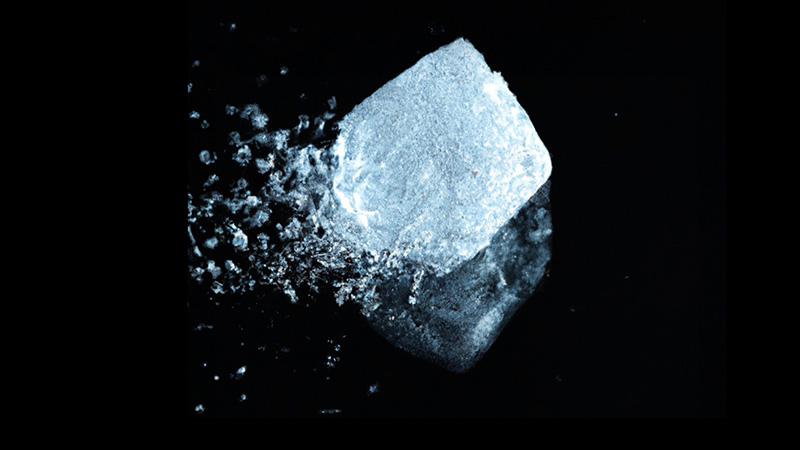 However, the most common desalination methods — filtering with reverse osmosis membranes or boiling contaminated water and then capturing pure water vapor — demand a great deal of energy and are not cost-effective.

Seeking to address those challenges, UCLA materials scientists have developed a system for passive freezing and demonstrated that it could work as a low-energy, low-cost option to desalinate water. Led by Aaswath Raman, an assistant professor of materials science and engineering at the UCLA Samueli School of Engineering, the research team found a novel solution using radiative cooling — a natural phenomenon that dissipates heat as thermal radiation into the night sky and outer space. The researchers’ method reduced salt concentration by as much as 96%.

Their proof-of-concept study was featured on the cover of the journal Joule’s Dec. 21 print issue.

“By using the cold of outer space as a natural heat sink, highly saline water can be cooled into pure ice that approaches drinking water quality as dissolved salts are squeezed out during the freezing process,” said Aaswath Raman, whose research focuses on radiative-cooling technologies. “Our desalination concept’s biggest advantage is that it works passively, with no energy required to freeze the water. 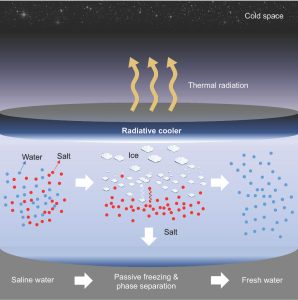 Graphic abstract showing the freezing-to-melting steps through which the salt content in water is reduced (Image courtesy: The Raman Lab/UCLA)

“That’s a huge advantage compared to energy-intensive conventional techniques, such as reverse osmosis or evaporative approaches,” he continued. “It also addresses the previous drawback against freezing for desalination, as refrigeration systems also use a lot of energy.”

The researchers suggest that the technique could work for much of the year in moderate climates, either as a standalone technology or as the first step in a system deploying other mechanisms to remove salt and contaminants.

Raman and his colleagues set up their experiment in Big Bear Lake, California, a high-altitude area about 100 miles east of Los Angeles in the San Bernardino Mountains. During the summer, nighttime temperatures there range from the 40’s to the low 60’s Fahrenheit — a prime environment for freezing water through radiative cooling.

To create a controlled environment conducive to freezing, the research group built a radiative cooler with several layers of insulation to keep heat out of the system. As it turns out, many everyday items can be used as insulation.

The cooler was made from cellophane tape coated with a thin layer of silver and then deposited on an aluminum cold plate. The cold plate contained two 500-milliliter tubes for salt water, allowing the saline solution to come in contact with the radiative cooler and freeze, even when ambient temperatures were above freezing. 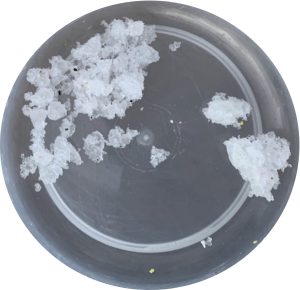 Pure ice forms after the process with nearly all salt removed (Image courtesy: The Raman Lab/UCLA)

Raman’s team wrapped a polystyrene foam box — much like the foam coolers found at the grocery store — in a layer of aluminized mylar (a material commonly found in packaging for consumer goods) on the inside and outside. This layer is meant to prevent any potential heat stored in the polystyrene or in the surrounding air from reaching the water. The radiative cooler itself was topped with two sheets of film made from polyethylene — the most common form of plastic — to further insulate it from the elements, while allowing heat to escape to the night sky.

After 40 minutes in the apparatus, the salt water froze, forming ice crystals of almost pure water in a brine mixture of mostly salt with some remaining water. A common vacuum filtration system was then used to separate the ice from the brine, which was then rinsed with a small amount of fresh water.

“While there remains much work before the system can be commercialized, our detailed modeling showed that not only does our system work, it has tremendous potential to be very cost-competitive and a game changer for many challenging desalination scenarios, particularly in the context of reducing carbon emissions,” Raman said. “Our approach holds promise for remediating saline waste generated in industrial facilities, including natural gas fracking sites. We’re also excited about the possibility of integrating this approach with existing desalination technologies to improve both economics and performance.”

The study was supported by the National Science Foundation, a Sloan Research Fellowship from the Alfred P. Sloan Foundation and a UCLA Hellman Fellows Award. The UCLA Technology Development Group has filed for a provisional patent on this technology.