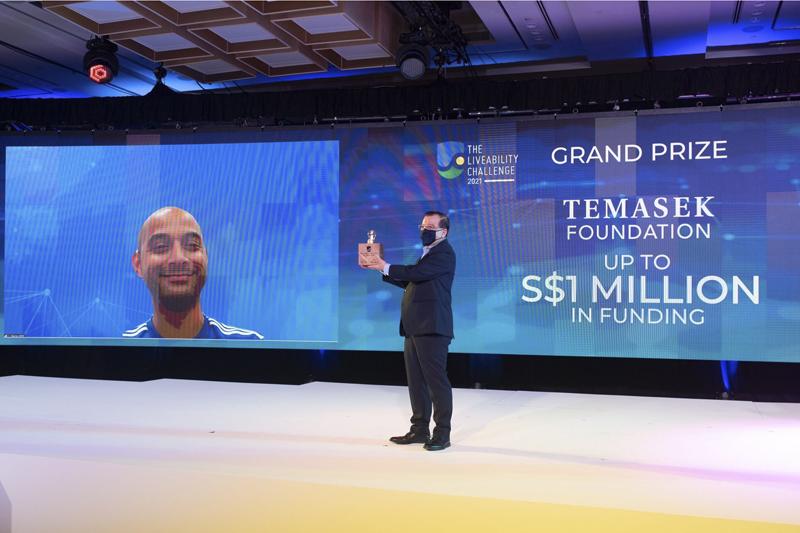 A team of UCLA researchers took home the top prize on Wednesday at the 2021 Liveability Challenge for their work on using seawater as a medium for carbon removal.

The UCLA startup, SeaChange, secured S$1 million (US$735,000) from the competition which is backed by Singapore-based nonprofit Temasek Foundation and organized by media company Eco-Business, triumphing over 450 applicants from more than 60 countries. The technology resulted from research led by Gaurav N. Sant, a professor of civil and environmental engineering at the UCLA Samueli School of Engineering.

The Liveability Challenge was created four years ago in search of innovative solutions to sustainability problems faced by cities in Southeast Asia. This year, the global contest homed in on technologies aimed at carbon dioxide removal from the environment. SeaChange’s technology, fueled by research from UCLA engineers, was selected as the grand-prize winner after a five-month search for game-changing solutions from around the world. The award will be used to help support the team’s development of a pilot plant in Singapore alongside the Public Utilities Board (PUB).

Sant, director of the UCLA Institute for Carbon Management (ICM) and Camly Tran, chief operating officer of SeaChange and executive director of ICM, participated in the multi-round competition, which included a project proposal and presentation. At the final round with five other finalist teams, Sant and Tran presented their approach via Zoom and answered questions from a panel of judges before the winners were announced at the end of the live event.

It is estimated that 10-20 billion metric tons of carbon dioxide need to be extracted from the atmosphere every year, starting in 2050, to offset the effects of climate change. Sant and the rest of the team address that challenge by turning to the ocean.

The UCLA researchers looked to seashells, which are naturally formed from carbon dioxide that is dissolved in the ocean, for inspiration for their work. What they came up with is a single-step carbon sequestration and storage system that removes carbon dioxide from the atmosphere and safely stores it at scale.

“Carbon removal is the most daunting challenge that we, as a society, need to address over the coming decades,” said Sant, who is a member of the California NanoSystems Institute at UCLA and also holds a faculty appointment in the Department of Materials Science and Engineering. “The SeaChange technology’s coupling of electrochemical engineering with the scale of the world’s oceans is a transformative direction toward addressing this challenge.”

The ocean can hold nearly 150 times more carbon dioxide per unit volume than the atmosphere, so the team developed a technology to extract carbon dioxide from the ocean. The researchers use a flow reactor, which runs seawater through an electrically charged mesh, turning the water alkaline and causing the carbon dioxide to combine with calcium and magnesium to create minerals. The seawater is thus drained of carbon dioxide and is ready to absorb more from the atmosphere. The process also creates hydrogen, which can be used as a clean fuel.

While other carbon dioxide sequestration technologies require multiple steps for extraction and run the risk of leaking the greenhouse gas back into the atmosphere, the UCLA-engineered technology securely stows it away through a unique, single-step process. The researchers estimate that it would take approximately 1,800 single-step plants to remove 10 billion metric tons of carbon dioxide from the atmosphere on a yearly basis.