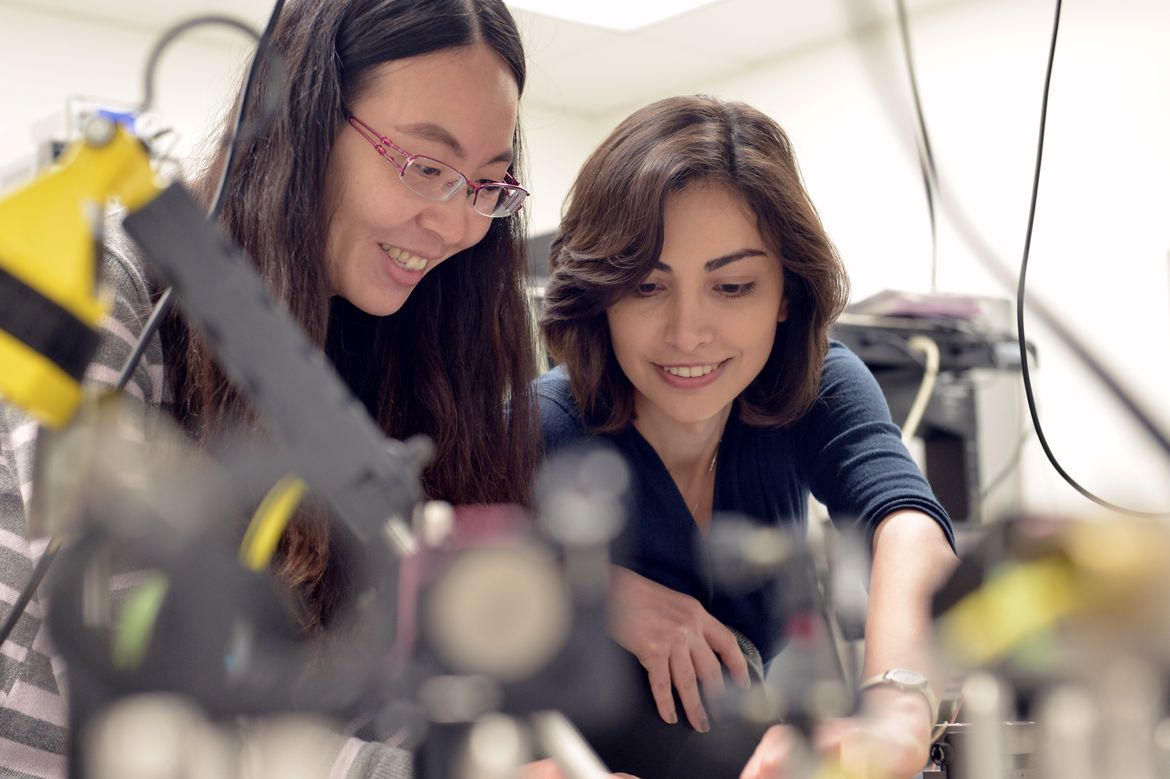 Researchers at the UCLA Samueli School of Engineering have developed an ultra-sensitive light-detecting system that could enable astronomers to view galaxies, stars and planetary systems in superb detail.

The system works at room temperature — an improvement over similar technology that only works in temperatures nearing 270 degrees below zero Celsius, or minus 454 degrees Fahrenheit. A paper detailing the advance is published today in Nature Astronomy.

The sensor system detects radiation in the terahertz band of the electromagnetic spectrum, which includes parts of the far-infrared and microwave frequencies.

The system produces images in ultra-high clarity, and it can detect terahertz waves across a broad spectral range — an improvement of at least 10 times more than current technologies that only detect such waves in a narrow spectral range. Its broad range capabilities could allow it to do observations that currently require several different instruments. It identifies what elements and molecules — for example, water, oxygen, carbon monoxide and other organic molecules, are present in those regions of space by seeing if their individual telltale spectral signatures are present.

“Looking in terahertz frequencies allows us to see details that we can’t see in other parts of the spectrum,” said Mona Jarrahi, a UCLA professor of electrical and computer engineering who led the research. “In astronomy, the advantage of the terahertz range is that, unlike infrared and visible light, terahertz waves are not obscured by interstellar gas and dust that surround these astronomical structures.”

The technology could be especially effective in space-based observatories, Jarrahi said, because unlike on Earth, terahertz waves can be detected without interference from the atmosphere.

The system could help scientists glean new insights into the composition of astronomical objects and structures and into the physics of how they form and die. It could also help answer questions about how they interact with the gases, dust and radiation that exists between stars and galaxies, and it could reveal clues about the cosmic origins of water or organic molecules that could indicate whether a planet is hospitable to life.

The system could also be used on Earth, to detect harmful gases for security or environmental monitoring purposes.

The key to the new system is how it converts incoming terahertz signals, which are not easy to sense and analyze with standard scientific equipment, into radio waves that are easy to handle.

Existing systems use superconducting materials to translate terahertz signals to radio waves. But to work, those systems use specialized liquid coolant to keep those materials at extremely low temperatures, approaching absolute zero. Supercooling the equipment is feasible on Earth, but when the sensors are taken on spacecraft, their lifespans are limited by the amount of coolant aboard. Also, because spacecrafts’ weight is so important, it can be problematic to carry the extra pounds of coolant the equipment needs.

The UCLA researchers created a new technology to address the coolant and related weight issues. Their device uses a beam of light to interact with the terahertz signals inside a semiconductor material with metallic nanostructures. The system then converts the incoming terahertz signal into radio waves, which are read by the system and can be interpreted by astrophysicists.

The study’s lead authors are Ning Wang, who earned a doctorate from UCLA, and Semih Cakmakyapan, a former postdoctoral scholar at UCLA, both of whom were members of Jarrahi’s research group. Other authors are UCLA graduate student Yen-Ju Lin and Hamid Javadi, a scientist at the NASA Jet Propulsion Laboratory.

The study was supported by JPL’s Strategic University Research Partnership program, the U.S. Department of Energy, the Office of Naval Research and the National Science Foundation.