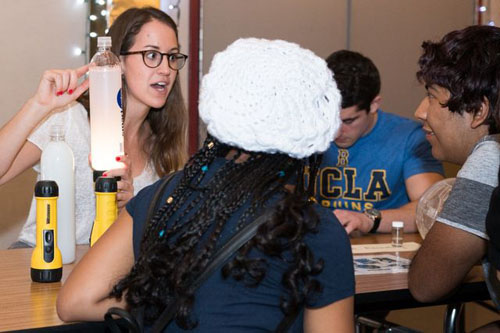 Graduate student volunteers and staff from the California NanoSystems Institute at UCLA recently showed more than 300 high school students from Bell Gardens High School that there’s a fun side to science at “Ask a Scientist,” an event that the high school hosts annually.

High school students flocked to the school auditorium to participate in hands-on demonstrations and pose questions about science, nanotechnology, research and available opportunities for internships and programs.

The school partnered with CNSI to bring concepts of nanotechnology and science to students from this underserved, predominantly Latino community who typically do not have access to science or scientists outside the classroom, said high school officials. “This event is special because it allows our students to see what’s out there in the science world,” said Juan Herrera, school principal. “These types of opportunities give our students the background, the knowledge, and the motivation to want to become scientists.”

One fun experiment that the Bell Gardens students observed involved superhydrophobic surfaces, based on a phenomenon where a surface repels water due to properties at the molecular and near-molecular level. Swimsuits made from fabrics with these properties were used in the Beijing Olympics, so that water flowing over the suit could be directed in.

“One of the volunteers who majors in organic chemistry showed us a Speedo [swimsuit] uses shark technology where the water slides right off, making the Olympic swimmer swim way faster,” said Daniela Morales, a senior at Bell Gardens.

Students eagerly chatted with the CNSI students and staff. “One volunteer went into detail about how you can use nanotechnology for solar energy,” said senior Alex Gonzalez. “We had a conversation about solar panels and the differences between batteries and solar energy itself…UCLA has a lot of outreach opportunities for students. This event was really eye-opening.” Morales noted that some of the UCLA scientists that were at the event were also Latino. “I never thought I would be here,” said the student, “It’s interesting to know that people that come from similar backgrounds as ours that are in the STEM field.”

The event was not only beneficial for the students, but for volunteers as well. Morgan Howe, a CNSI volunteer and a UCLA graduate student studying organic chemistry, said she enjoys teaching people and students about science.

“I chose to be involved in this event in particular because I like helping to teach science- and not just in the classroom. It was an opportunity to get people excited who wouldn’t normally be excited about science,” Howe said.