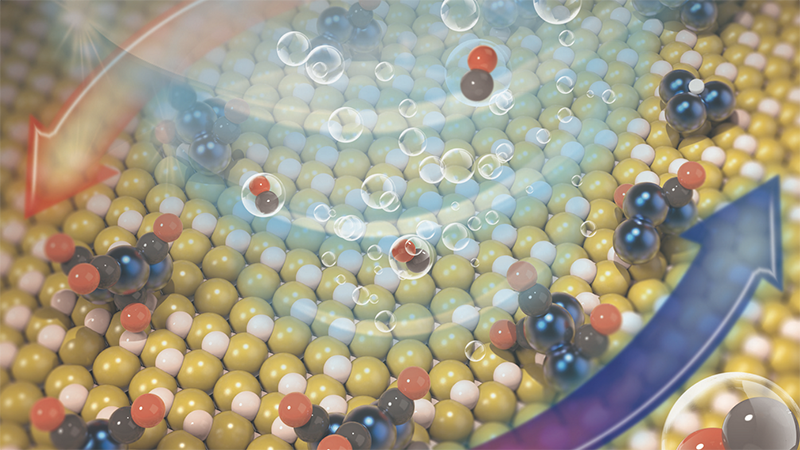 An illustration of the transformation of the rhodium catalyst in reaction conditions. (Image courtesy of Sautet Group/UCLA)

A team of chemists and engineers from universities in the U.S. and Japan have discovered how an important industrial chemical catalyst — rhodium — undergoes structural changes during chemical reactions for production of chemicals and fuels.
The revelation shared by researchers from the UCLA Samueli School of Engineering, the University of Kansas and the University of Electro-Communications in Tokyo has major implications in the design of catalysts. Catalysis is a key method for the processes that transform feedstock chemicals into refined products.

The research provides a novel understanding of the structure and dynamics of catalytic active sites. One class of catalysts uses tiny particles of metals, consisting of only a few hundred atoms, spaced apart on a larger surface of an oxide compound. Advances in the field now allow for single atoms of metal to be deposited on the surface. This type of design could allow for catalyzing processes to become much more efficient, as lone atoms can, in theory, match and interact one-on-one with the molecules.

However, an optimized design to achieve the most efficient and effective catalysis will depend on a more in-depth understanding of what happens at the atomic level during the process.

The researchers examined single-atom rhodium catalysts used in the production of hydrogen gas, an emissions-free clean fuel, from methane. In modeling and catalytic tests, they found that the single atoms don’t stay single for long.

During pretreatment of hydrogen, the single rhodium atoms assemble into nanoparticle groupings of about 20 atoms.

Then, as the catalyst sparks the methane-to-hydrogen reaction, the small particles disassemble into smaller three-atom clusters of rhodium. The researchers found that this structural change is the result of the rhodium interacting with carbon monoxide, a byproduct of the chemical reaction. In addition, the change in atomic structure from 20-atom groups to three-atom clusters is also reversible.

“This work shows that, despite advances into the preparation of single-atom catalysts, their structure does not stay put during pretreatments nor the actual reaction,” said Sautet, a member of the California NanoSystems Institute at UCLA. “Now, we understand that idealized catalyst designs may not work exactly as intended, at least not at the atomic level. This understanding opens paths to design more efficient catalysts for clean and energy-efficient processes by directly affecting the nature of the metal clusters seen during reaction.”

The research was supported by the U.S. Department of Energy and the National Science Foundation.