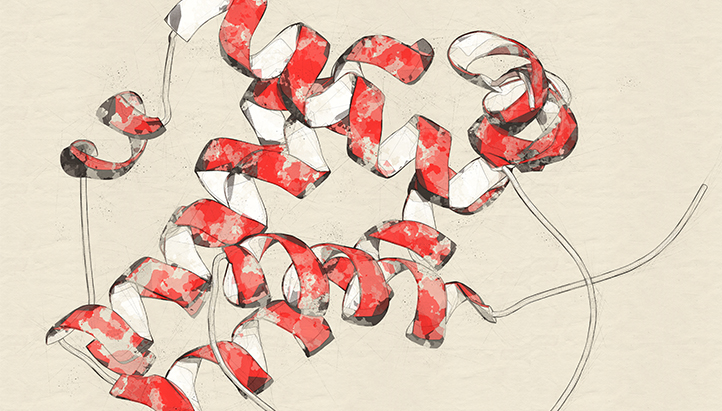 This article was originally published by LA BioMed News

A discovery by researchers at the Los Angeles Biomedical Research Institute (LA BioMed) has uncovered a common blueprint for proteins that have antimicrobial properties. This finding opens the door to design and development of a new generation of anti-infectives active against pathogens that have become resistant to conventional antibiotics.

The findings are published in the Proceedings of the National Academy of Sciences of the United States of America, in a paper titled “A Unifying Structural Signature of Eukaryotic ?-helical Host Defense Peptides.” The discovery was made by Dr. Nannette Yount and Dr. Michael Yeaman, who found that certain small proteins, called peptides, have antimicrobial activity if they contain a specific structural signature consisting of a conserved amino acid pattern that forms a three-dimensional shape known as an alpha-helix.

Yount and Yeaman discovered and characterized the alpha-core signature, and then used it to mine the database of all known proteins and peptides. In doing so, they found thousands of proteins never before known to have antimicrobial activity. The team then synthesized examples of the newly discovered peptides demonstrating that they have potent antimicrobial activity against infective microbes that resist even the most modern antibiotics.

In addition to his work at LA BioMed, Yeaman is also a Professor of Medicine at UCLA, and Chief of the Division of Molecular Medicine at Harbor-UCLA Medical Center. To further validate the significance of this discovery, he and Yount worked with Gerard Wong and his team from the Department of Bioengineering, Department of Chemistry and Biochemistry, and the California NanoSystems Institute at UCLA. Together, they applied state-of-the-art artificial intelligence and machine learning methods to verify how the alpha-core signature encompasses features of peptides known to exert strong antimicrobial activity. This is an example of how medicine, bioengineering and computational modeling can work toward improved health outcomes.

One significant advancement the LA BioMed team discovered is that it can be used to engineer fundamentally new types of anti-infectives designed to prevent or treat even the most antibiotic-resistant microbes—superbugs—commonly found in hospitals and other healthcare facilities, which are now threatening U.S. public health.

LA BioMed has patented the intellectual property resulting from the discovery and holds the rights to the technology along with Yount and Yeaman, paving a path to benefit long-term from the development of new treatments built upon this exciting new technology.

About LA BioMed
LA BioMed is an incubator of innovation with a global reach and a 66-year reputation of improving and saving lives. Driven by the positive social impacts of breakthrough therapies, the Southern California-based research institute and incubator – with over 100 principal investigators (PhDs, MDs and MD/PhDs) working on over 600 research studies, including therapies for multiple orphan diseases – is an essential element to one of the nation’s top-ten biotech clusters. Find out more at labiomed.org.