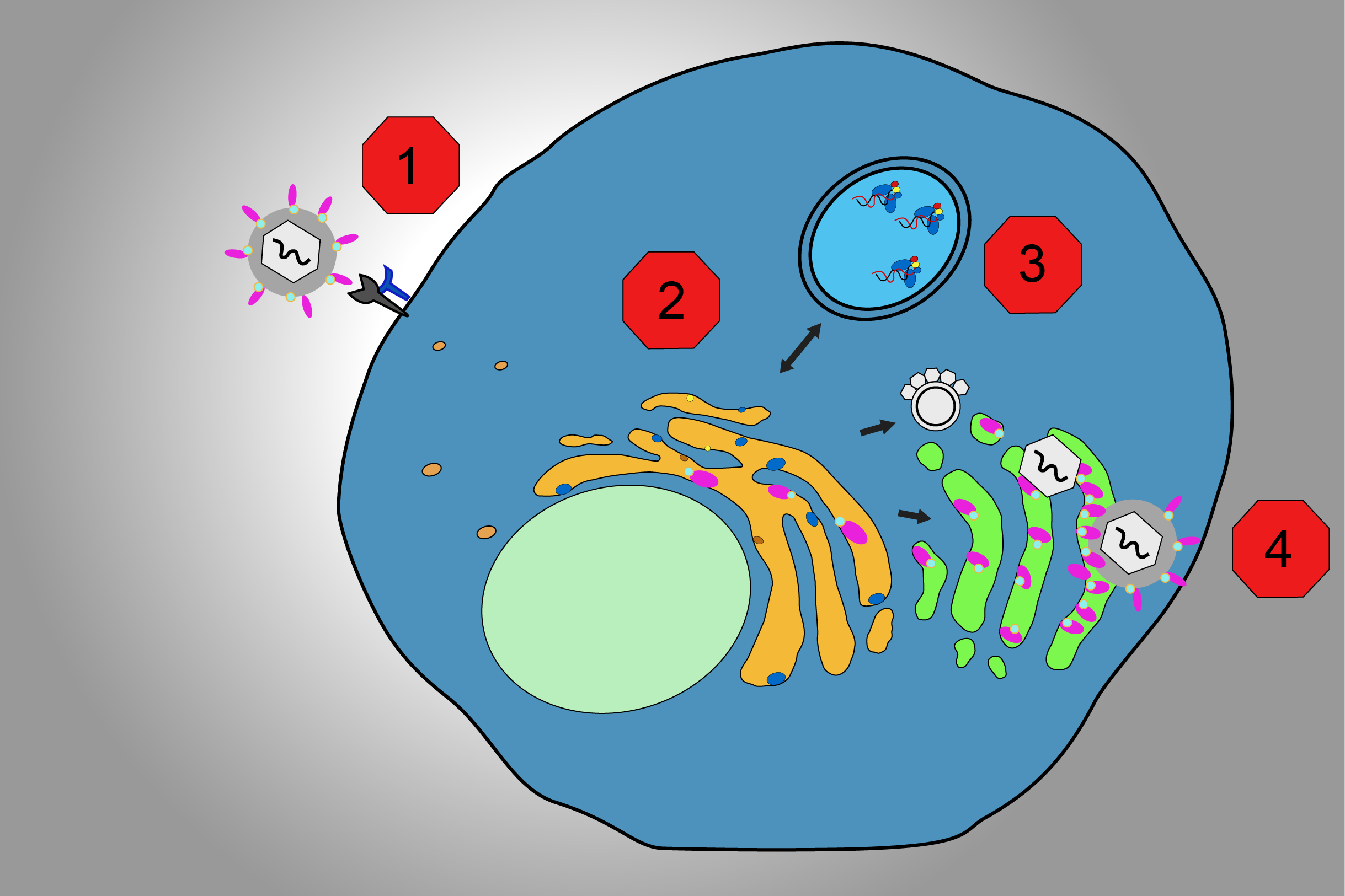 The steps of the virus growth cycle that can be targeted with therapies: The virus enters a host cell (1), the virus’s genetic instructions are released, taking over cellular machinery (2), the virus is replicated within the cell (3) and copies of the virus exit the cell in search of new host cells to infect (4). Drugs like berzosertib might disrupt steps 2 and 3. (Illustration: Marc Roseboro/California NanoSytems Institute at UCLA)

A collaboration among scientists from UCLA and other universities in California, Delaware and Germany, as well as a German pharmaceutical company, has singled out a compound that shows promise for treating SARS-CoV-2, the virus that causes COVID-19. In a series of experiments using different types of cells in lab dishes, the researchers found that berzosertib was effective in blocking the coronavirus’s ability to replicate and did not cause significant harm to cells.

Berzosertib, which is licensed by Merck KGaA, Darmstadt, Germany, is being investigated in separate early- and mid-stage clinical trials in combination with chemotherapy as a possible treatment for small-cell lung cancer, ovarian cancer and other types of tumors.

Drugs are categorized as small molecules when their individual molecules are tiny enough that they can penetrate to where they are needed. The researchers screened 430 drugs from among the approximately 200,000 compounds in CNSI’s Molecular Screening Shared Resource libraries. They identified 34 that demonstrated at least some ability to halt the coronavirus, and eight that did so at relatively lower doses, before zeroing in on berzosertib as the most promising candidate.

Damoiseaux, Arumugaswami and Dr. Brigitte Gomperts, a UCLA professor of pediatrics and of pulmonary medicine, received a $6.2 million grant from the Department of Defense to continue their investigations of berzosertib. Gomperts, who also is a co-author of the Cell Reports study, is a member of the UCLA Broad Stem Cell Research Center.

Because cigarette smokers have a greater risk for severe COVID-19 symptoms and poor health outcomes, the researchers will use laboratory models that emulate the effects of smoking on lung tissue to assess how safe and effective berzosertib might be in fighting the coronavirus.

The scientists aimed to block the coronavirus’s ability to use cellular proteins to replicate rather than attack the virus directly, because drugs that directly interfere with the virus are expected to have trouble keeping up with SARS-CoV-2’s propensity to mutate.

Scientists believe the same type of drug could help fight SARS-CoV-2 because the virus hijacks certain protein kinases from its hosts in order to direct the cells to produce new copies of the virus.

“Kinase inhibitors are very frequently standalone cancer treatments, and not all single-agent kinase inhibitors are well tolerated,” said Damoiseaux, who is director of the Molecular Screening Shared Resource and UCLA’s campus lead for the University of California Drug Discovery Consortium. “By contrast, berzosertib is not a standalone treatment and has very limited effects on cell health when used on its own. It may be worthwhile for researchers to run clinical trials to find out whether cancer patients in particular might profit from this drug as a COVID-19 treatment.”

As a practical measure, the researchers limited their search to compounds that either had been approved, or are already in the process of being evaluated, for safety in humans.

“That way, the compounds have cleared the first regulatory hurdle and could be deployed for further clinical trials on COVID-19 faster than drugs that have not been tested in humans,” Arumugaswami said.

In a series of seven experiments, the scientists tested protein kinase inhibitors in cultures of coronavirus-infected cells, including from organs that COVID-19 attacks, the kidney, heart and lungs. The researchers pretreated cells with the drugs, exposed the cells to SARS-CoV-2, allowed 48 hours for infection to set in, then evaluated results.

The investigations took place in a controlled high-security laboratory at UCLA that is designated for working with deadly microbes or viruses.

Berzosertib consistently stalled the coronavirus’s replication without damaging cells. The scientists also tested the drug against the coronaviruses that cause the diseases SARS and MERS, both of which triggered deadly outbreaks earlier in the 2000s. They found that it was effective in stopping the replication of those viruses as well.

“This is a chance to actually find a drug that might be broader in spectrum, which could also help fight coronaviruses that are yet to come,” Damoiseaux said.

The researchers note that further research to explain the mechanism behind berzosertib’s anti-coronavirus action and preclinical studies are both necessary before the compound could be tested in humans for treating COVID-19.

The study’s co-corresponding author is Ulrich Betz of Merck KGaA, Darmstadt, Germany; the company also provided partial funding and clinical-grade berzosertib for the research. Other co-authors are from UCLA, Cedars-Sinai Medical Center, UC Irvine, University of Delaware, the Leibniz Institute for Experimental Virology in Germany, Heidelberg University in Germany and Scripps Research Institute.