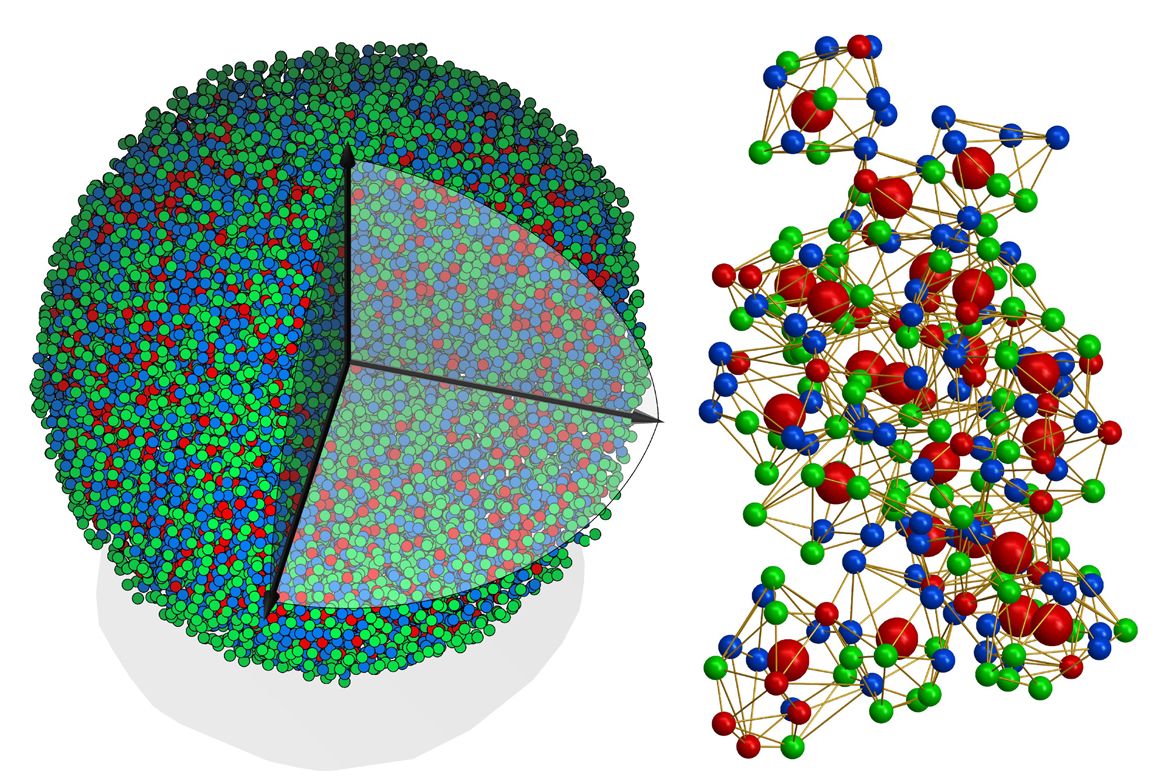 At left, an experimental 3D atomic model of a metallic glass nanoparticle, 8 nanometers in diameter. Right, the 3D atomic packing of a supercluster within the structure, with differently colored balls representing different types of atoms. (Image Credit: Yao Yang and Jianwei “John” Miao/UCLA)

Glass, rubber and plastics all belong to a class of matter called amorphous solids. And in spite of how common they are in our everyday lives, amorphous solids have long posed a challenge to scientists.

Since the 1910s, scientists have been able to map in 3D the atomic structures of crystals, the other major class of solids, which has led to myriad advances in physics, chemistry, biology, materials science, geology, nanoscience, drug discovery and more. But because amorphous solids aren’t assembled in rigid, repetitive atomic structures like crystals are, they have defied researchers’ ability to determine their atomic structure with the same level of precision.

Until now, that is.

A UCLA-led study in the journal Nature reports on the first-ever determination of the 3D atomic structure of an amorphous solid — in this case, a material called metallic glass.

“We know so much about crystals, yet most of the matter on Earth is non-crystalline and we know so little about their atomic structure,” said the study’s senior author, Jianwei “John” Miao, a UCLA professor of physics and astronomy and member of the California NanoSystems Institute at UCLA.

Observing the 3D atomic arrangement of an amorphous solid has been Miao’s dream since he was a graduate student. That dream has now been realized, after 22 years of relentless pursuit.

“This study just opened a new door,” he said.

Metallic glasses tend to be both stronger and more shapeable than standard crystalline metals, and they are used today in products ranging from electrical transformers to high-end golf clubs and the housings for Apple laptops and other electronic devices. Understanding the atomic structure of metallic glasses could help engineers design even better versions of these materials, for an even wider array of applications.

The researchers used a technique called atomic electron tomography, a type of 3D imaging pioneered by Miao and collaborators. The approach involves beaming electrons through a sample and collecting an image on the other side. The sample is rotated so that measurements can be taken from multiple angles, yielding data that is stitched together to produce a 3D image.

“We combined state-of-the-art electron microscopy with powerful algorithms and analysis techniques to study structures down to the level of single atoms,” said co-author Peter Ercius, a staff scientist at Lawrence Berkeley National Laboratory’s Molecular Foundry, where the experiment was conducted. “Direct knowledge of amorphous structures at this level is a game changer for the physical sciences.”

The researchers examined a sample of metallic glass about 8 nanometers in diameter, made of eight different metals. (A nanometer is one-billionth of a meter.) Using 55 atomic electron tomography images, Miao and colleagues created a 3D map of the approximately 18,000 atoms that made up the nanoparticle.

Because amorphous solids have been so difficult to characterize, the researchers expected the atoms to be arranged chaotically. And although about 85% of the atoms were in a disordered arrangement, the researchers were able to identify pockets where a fraction of atoms coalesced into ordered superclusters. The finding demonstrated that even within an amorphous solid, the arrangement of atoms is not completely random.

Miao acknowledged one limitation of the research, borne of the limits of electron microscopy itself. Some of the metal atoms were so similar in size that electron imaging couldn’t distinguish between them. For the purposes of the study, the researchers grouped the metals into three categories, uniting neighbors from the periodic table of elements: cobalt and nickel in the first category; ruthenium, rhodium, palladium and silver in the second; and iridium and platinum in the third.

The research was supported primarily by the STROBE National Science Foundation Science and Technology Center, of which Miao is deputy director, and in part by the U.S. Department of Energy.

“This groundbreaking result exemplifies the power of a transdisciplinary team,” said Charles Ying, the National Science Foundation program officer who oversees funding for the STROBE center. “It demonstrates the need for long-term support of a center to address this type of complex research project.”

Other co-authors are Yonggang Yao and Liangbing Hu of University of Maryland, College Park; and Andreas Schmid and Peter Ercius of Lawrence Berkeley National Laboratory.

“This work is a great illustration of how to address longstanding grand challenges by bringing together scientists with many different backgrounds in physics, mathematics, materials and imaging science, with strong partnerships between universities and national laboratories,” said Margaret Murnane, director of the STROBE center. “This is a spectacular team.”