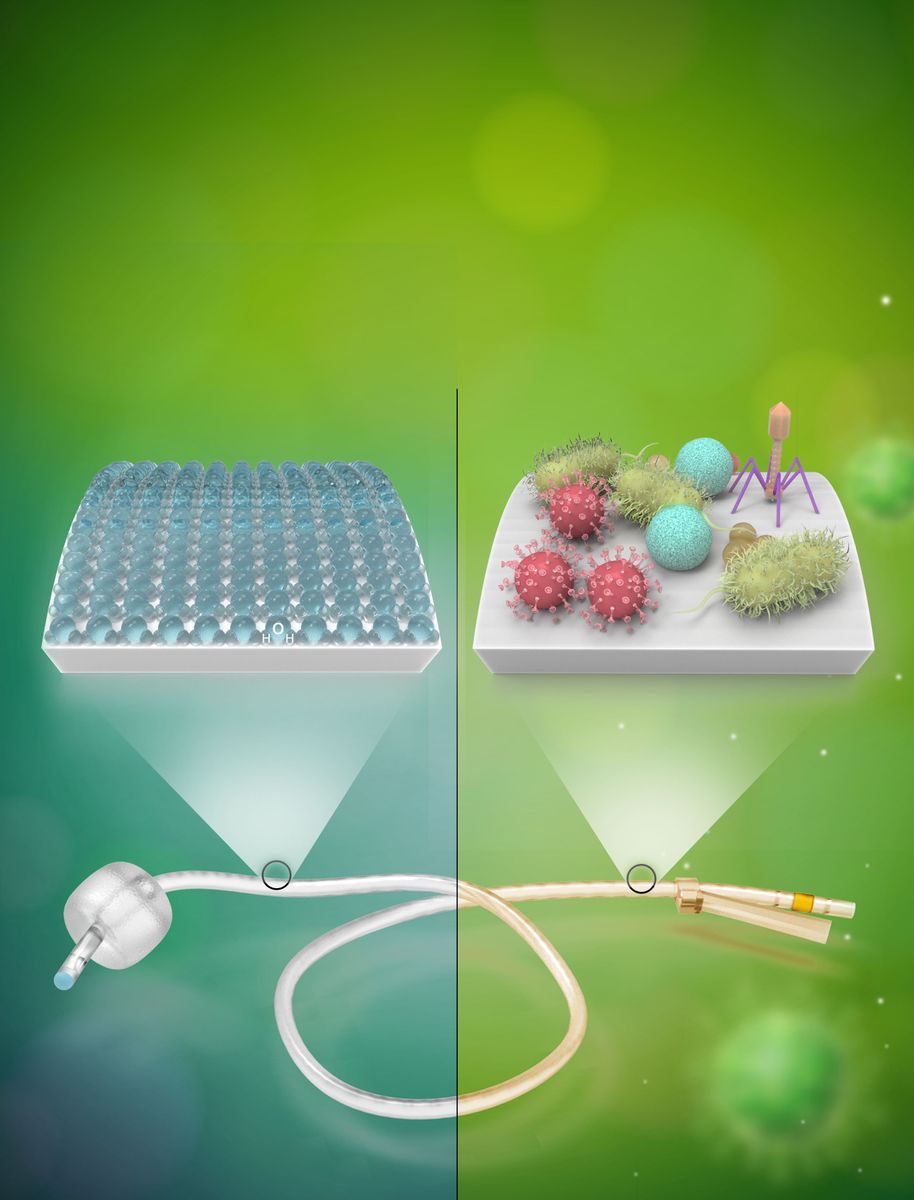 In this artist’s image, harmful microbes grow freely on a non-treated catheter (right) but are unable to adhere to a catheter with the new zwitterionic surface treatment (left) (Image credit: Amir Sheikhi/Penn State).

A hospital or medical clinic might be the last place you’d expect to pick up a nasty infection, but approximately 1.7 million Americans do each year, resulting in nearly 100,000 deaths from infection-related complications and roughly $30 billion in direct medical costs.

The biggest culprits, experts say — accounting for two-thirds of these infections — are medical devices like catheters, stents, heart valves and pacemakers, whose surfaces often become covered with harmful bacterial films. But a novel surface treatment developed by a UCLA-led team of scientists could help improve the safety of these devices and ease the economic burden on the health care system.

The new approach, tested in both laboratory and clinical settings, involves depositing a thin layer of what is known as zwitterionic material on the surface of a device and permanently binding that layer to the underlying substrate using ultraviolet light irradiation. The resulting barrier prevents bacteria and other potentially harmful organic materials from adhering to the surface and causing infection.

The team’s findings are published May 19 in the journal Advanced Materials.

In the laboratory, researchers applied the surface treatment to several commonly used medical device materials, then tested the modified materials’ resistance to various types of bacteria, fungi and proteins. They found that the treatment reduced biofilm growth by more than 80% — and in some cases up 93%, depending on the microbial strain. 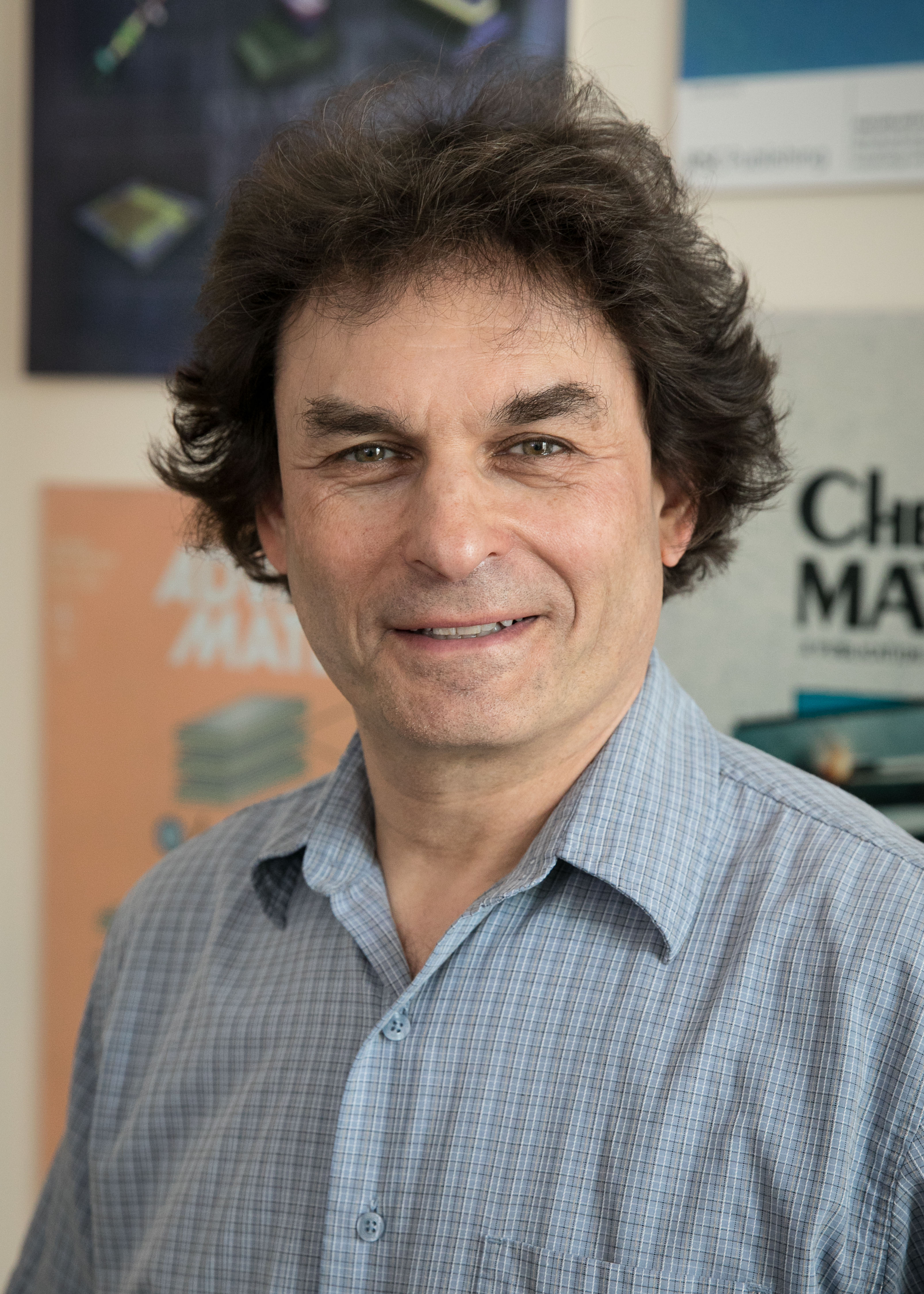 “The modified surfaces exhibited robust resistance against microorganisms and proteins, which is precisely what we sought to achieve,” said Richard Kaner, UCLA’s Dr. Myung Ki Hong Professor of Materials Innovation and senior author of the research. “The surfaces greatly reduced or even prevented biofilm formation.

“And our early clinical results have been outstanding,” Kaner added.

The clinical research involved 16 long-term urinary catheter users who switched to silicone catheters with the new zwitterionic surface treatment. This modified catheter is the first product made by a company Kaner founded out of his lab, called SILQ Technologies Corp., and has been cleared for use in patients by the Food and Drug Administration.

Ten of the patients described their urinary tract condition using the surface-treated catheter as “much better” or “very much better,” and 13 chose to continue using the new catheter over conventional latex and silicone options after the study period ended.

“One patient came to UCLA a few weeks ago to thank us for changing her life — something that, as a materials scientist, I never thought was possible,” Kaner said. “Her previous catheters would become blocked after four days or so. She was in pain and needed repeated medical procedures to replace them. With our surface treatment, she now comes in every three weeks, and her catheters work perfectly without encrustation or occlusion — a common occurrence with her previous ones.”

Such catheter-related urinary tract problems are illustrative of the issues plaguing other medical devices, which, once inserted or implanted, can become breeding grounds for bacteria and harmful biofilm growth, said Kaner, a member of the California NanoSystems Institute at UCLA who is also a distinguished professor of chemistry and biochemistry, and of materials science and engineering. The pathogenic cells pumped out by these highly resilient biofilms then cause recurring infections in the body.

In response, medical staff routinely give strong antibiotics to patients using these devices, a short-term fix that poses a longer-term risk of creating life-threatening, antibiotic-resistant “superbug” infections. The more widely and frequently antibiotics are prescribed, Kaner said, the more likely bacteria are to develop resistance to them. A landmark 2014 report by the World Health Organization recognized this antibiotic overuse as an imminent public health threat, with officials calling for an aggressive response to prevent “a post-antibiotic era in which common infections and minor injuries which have been treatable for decades can once again kill.”

“The beauty of this technology,” Kaner said, “is that it can prevent or minimize the growth of biofilm without the use of antibiotics. It protects patients using medical devices — and therefore protects all of us — against microbial resistance and the proliferation of superbugs.”

The surface treatment’s zwitterion polymers are known to be extremely biocompatible, and they absorb water very tightly, forming a thin hydration barrier that prevents bacteria, fungi and other organic materials from adhering to surfaces, Kaner said. And, he noted, the technology is highly effective, non-toxic and relatively low in cost compared with other current surface treatments for medical devices, like antibiotic- or silver-infused coatings.

Beyond its use in medical devices, the surface treatment technique could have non-medical applications, Kaner said, potentially extending the lifetimes of water-treatment devices and improving lithium-ion battery performance.

Co–lead authors of the study are Brian McVerry, Alex Polasko and Ethan Rao. McVerry helped develop this and other surface treatments during his UCLA doctoral research with Kaner and co-founded SILQ Technologies Corp., where is he now chief technology officer. Rao, director of research and development at SILQ, and study co-author Na He, a process engineer at SILQ, have conducted UCLA research in Kaner’s laboratory and are employees of SILQ.