California NanoSystems Institute > Engineering > May 3, 2021 | Did you get enough steps in today? Maybe one day you’ll ask your ‘smart’ shirt.

Did you get enough steps in today? Maybe one day you’ll ask your ‘smart’ shirt.

Nextiles joins Apple, Samsung and Google with ideas on how to computerize everyday apparel 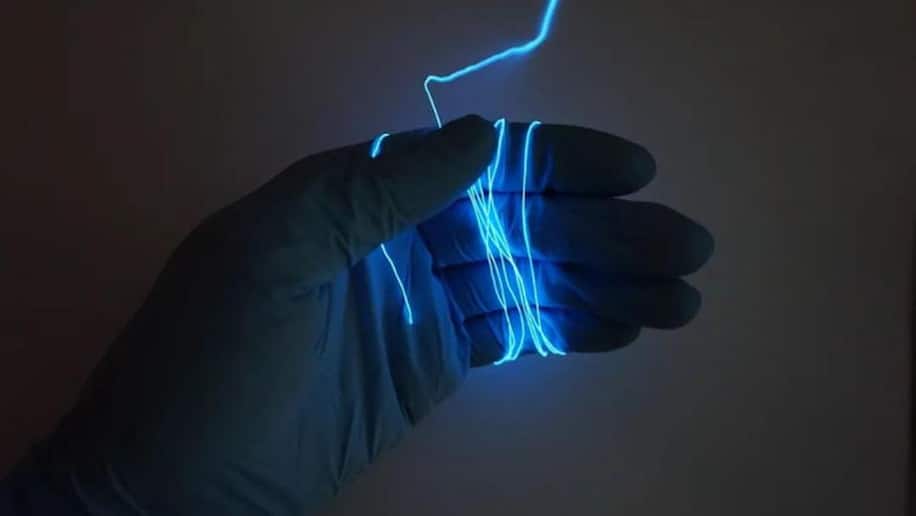 This article was originally published in The Washington Post

Nextiles, a National Science Foundation-backed textile company, wants to weave FitBit-like tech into textiles. It’s the latest addition to an evolving list of efforts to revolutionize the clothing we wear.

The first wave of the company’s technology is embedded in sportswear. The idea is that it enables athletes to measure their velocity, force, momentum and other metrics that you can’t get from today’s wearable wristbands and smartwatches.

The broader vision is for the advanced fabric to trickle down to mass-market consumers to track heart rate and breathing through ordinary-looking garments.

“My whole goal was to make your everyday threads a smart factor in your wearables,” said George Sun, Nextiles’ chief executive and a former executive at the sportswear designer Puma. “Rather than strapping a computer chip to your body, we can sew these circuitries directly into a sleeve, shirt and pants.”

The company’s first offering is an arm and knee sleeve designed to measure mechanical changes from multiple data points on the garment. The information can be used to predict and prevent injuries and strain, Sun says.

Nextiles is far from the first to dream of such a thing. The start-up’s product line represents the latest approach in a sea of ideas to revolutionize textiles so that apparel can do more than make a fashion statement.

In February, Apple patented smart “fabric-based buttons” that might trigger controls on Apple Watches, iPhones and MacBooks. In 2018, Samsung patented plans for a “smart garment” T-shirt that changes colors on demand. Both companies fall behind Google, which launched its Project Jacquard smart fabric division in 2015.

One innovation we won’t be seeing soon: Over-the-air charging

Two years later, Project Jacquard partnered with Levi’s on a jacket and corresponding app so you could use the clothes to answer calls. The jacket was met with mixed reviews. Still, the search giant continues to work with brands. Last year, it teamed up with Adidas on a smart insole for soccer players seeking to measure kicks, shot power, distance and speed. Meanwhile, several research labs are seeking to push things even further.

What if your shirt could sense that you’re sweating and adjust its temperature? Or what if your pants could notice that your stride has changed and alert you at the onset of injuries? That’s what the future may hold, textile researchers say. It might be years, possibly even decades, for the tech to reach consumers, but the foundation is being laid today with scientists creating pieces of fabric that push the boundaries of what’s been possible before.

In March, researchers from China’s Fudan University published findings on electronic fabric capable of turning clothing into a display screen. They hope to turn their attention to the consumer market next, according to Qibing Pei, a materials scientist at the University of California, Los Angeles who co-authored the study.

In 2019, scientists from the University of Maryland invented a fabric capable of warming up a person when they’re cold and cooling them off when they’re feeling hot.

Researchers at the Massachusetts Institute of Technology have worked to unfold the future of textiles for years, coming up with ways to miniaturize batteries, microphones and semiconductors to stitch them onto a single strand of fabric.

Nextiles’ approach to smart clothing is to use commonly available, machine washable threads.

The start-up, founded in 2018, sources yarns from fabrics such as cotton, polyester and spandex then coats them with a conductive material, typically stainless steel, to collect data. Once melded with the conductive polymers, the fibers act like cables and are capable of transmitting signals. The company then weaves the fibers into fabric, layering the threads using proprietary stitching techniques.

“We sew them in almost a cakelike fashion,” Sun said. “We sew a pattern in the first layer, a different pattern in the second layer, and maybe a few other layers, so the threads become almost like highways crisscrossing each other.” Sensors are strategically placed around the fabric, and Bluetooth chips about the size of a thumbnail are inserted to send the information to a smartphone or computer for processing.

The firm says its fabrics are sensitive to any movement you make. It partners with and sells products to athletes to measure how the threads and fabric bends, stretches and twists around the body while they perform, which helps the start-up derive metrics hard to see with the naked eye such as momentum and torque. It’s working on other patents surrounding EKG and temperature tracking in the hopes to expand further into the connected fitness market, across the automotive sector and medical industry.

Automakers might use sensing fabrics on car seats to augment human-vehicle interactions, or in tires to sense changes in the pavement. Imagine if your seat can tell that you’re cold, and automatically start to warm up.

While there are many ideas for how innovative fabric could change the world, it might be a while before consumers can buy anything more complex than clothes capable of measuring human performance or controlling smartphone volume.

Scientists can do a lot in a lab, but most of those results are tough for companies to scale, researchers say.

“Fabric manufacturers aren’t set up for quality checking electronics,” said Laura Devendorf, a technologist working on human-computer interaction and design research at the University of Colorado Boulder. In 2016, she collaborated with Project Jacquard at Google to investigate color-changing thread. “They might be able to put a circuit in there, but how do you get a sewing house to verify that all your connections are solid?”

Nextiles wouldn’t reveal how much its sleeves and software service costs. The firm’s CEO says it’s currently a bespoke service for which “most elite performers are willing and able to pay a premium price.” Other companies in the smart sportswear arena also charge high prices for goods. Montreal-based Hexoskin offers a sensor-packed shirt and corresponding Bluetooth device for around $400, while Finland-based Myontec sells its MBelt for muscle tracking for around $1,500.

Nextiles envisions a future subscription model, where people pay monthly for access to the data that’s generated by smart fabric. The company has a sewing shop and design team in the New York City area to build some products in-house.

It’s hard to know for certain how the future of computerized textiles will unfold. It’s yet to be shown that consumers will even want high-tech shirts with wires built-in when smartphones and smartwatches are capable of so much already. Still, MIT developed a road map for how e-textiles may continue to evolve — first with “fabric computers” or soft material made of individual fibers capable of storing lots of data and power. The school has researchers working on these efforts today. Then, one day those yarns might be boosted with algorithms to make sense of physiological data picked up by clothing.

“Just imagine all the biochemicals that come out of you and get released into your clothes. Today, all of that stuff gets erased in the washing machine. But at some point, your fabric could learn, listen to subtle changes, and alert you to go to the doctor for a checkup,” said Yoel Fink, professor of materials science at MIT. “It transforms the way we think about health care. But first, we need fibers that we know are going to get better with time.”