Programmable electronics based on the reversible doping of 2-D semiconductors 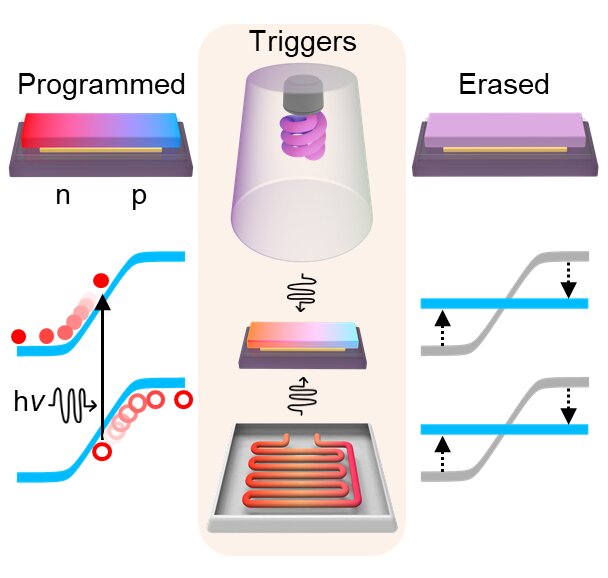 This article was originally published by TechXplore

In recent years, researchers have been trying to develop new types of highly performing electronic devices. As silicon-based devices are approaching their maximum performance, they have recently started exploring the potential of fabricating electronics using alternative superconductors.

Two-dimensional (2-D) semiconductors, such as graphene or tungsten diselenide (WSe2), are particularly promising for the development of electronics. Unfortunately, however, controlling the electronic properties of these materials can be very challenging, due to the limited amount of space within their lattices to incorporate impurity dopants (a process that is critical for controlling the carrier type and electronic properties of semiconductor materials).

Researchers at University of California, Los Angeles, have recently devised an approach that could enable the development of programmable devices made of 2-D semiconductors. This approach, presented in a paper published in Nature Electronics, leverages a superionic phase transition in silver iodide to tailor the carrier type within devices made of WSe2 via a process called switchable ionic doping.

“The central goal of our work was to create programmable electronic devices that are programmable at moderate temperature and stably operable at room temperature,” Xiangfeng Duan, one of the researchers who carried out the study, told TechXplore. “Our study is the first to demonstrate that superionic materials can be used to tailor the charge carrier type of atomically thin semiconductors and create programmable electronic components such as diodes and transistors with switchable polarities, which stably operate at room temperature and can be erased by certain environmental cues.” 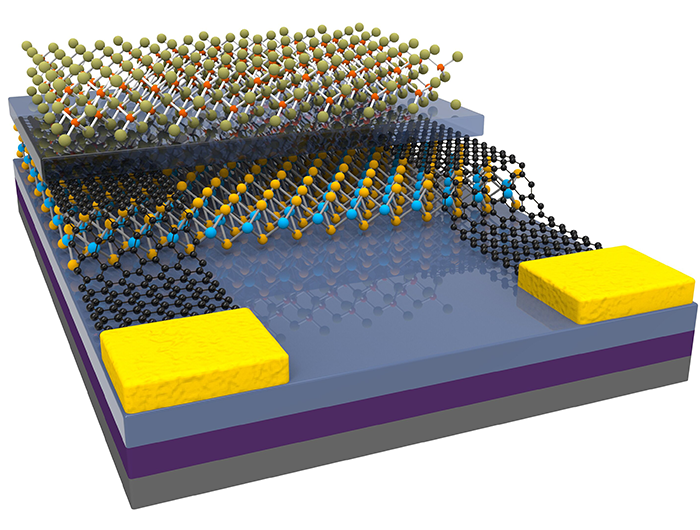 “The central goal of our work was to create programmable electronic devices that are programmable at moderate temperature and stably operable at room temperature,” Xiangfeng Duan, one of the researchers who carried out the study. (Image courtesy Lee, et al.)

Over the past few years, several researchers have tried to use ionic liquids as electrostatic doping agents to program 2-D semiconductor-based devices. However, most of the resulting devices can only operate at a limited range of temperatures, which are typically very low. The main reason for this is that these liquids tend to have a high ionic conductance at room temperature and the programmed ionic doping can rapidly relax back.

To overcome the limitations of previously developed 2-D semiconductor-based electronics, the researchers doped their devices with solid-state superionic silver iodide. With a sharp superionic phase transition, silver iodide features a very large switch of ionic conductance in a narrow temperature window. These properties of silver iodide allowed Dua and his colleagues to program their devices at moderate temperatures, while also enabling their stable operation at ambient conditions.

“Our strategy not only solves the current technological challenges in selectively doping 2-D semiconductors, it also enables the creation of a new type of delible electronic devices, the programmed functions of which can be erased on demand by environmental cues such as temperature and ultraviolet radiation,” Duan said. “We believe that these qualities are desirable for future electronic information security, privacy protection or defense.”

In the future, the design strategy and solid-state ionic doping approach devised by this team of researchers could pave the way to the development of programmable electronics based on 2-D semiconductors, which can operate both at low and moderate temperatures. Meanwhile, Duan and his colleagues plan to conduct further studies exploring the potential of their approach for developing other types of devices.

“In our next studies, we will explore this new direction for future electronics further by taking advantages of the interesting interactions between electron transport in atomically thin semiconductor and ionic transport in ionic materials,” Duan said. “The combination of both may also lead to the development of a unique type of neuromorphic devices.”