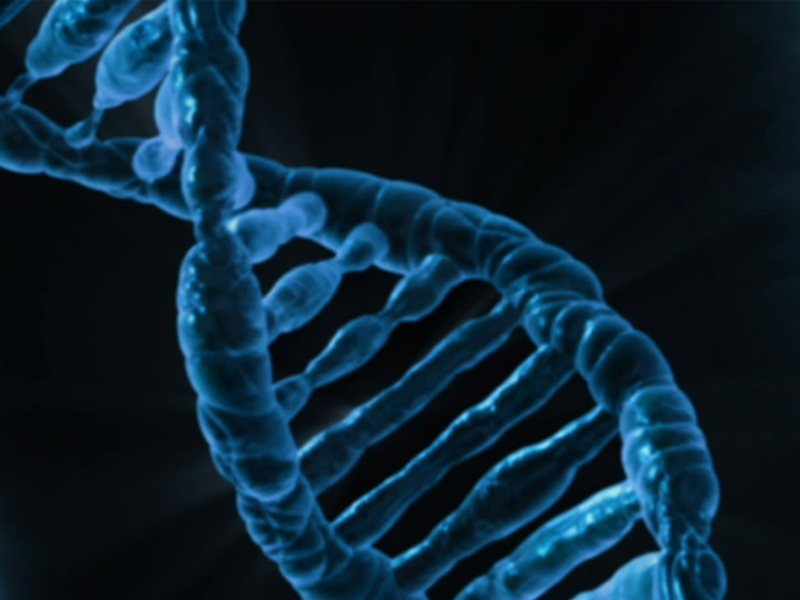 A team of scientists led by Virginia Commonwealth University physicist Jason Reed, Ph.D., have developed new nanomapping technology that could transform the way disease-causing genetic mutations are diagnosed and discovered. Described in a study published today in the journal Nature Communications (read more), this novel approach uses high-speed atomic force microscopy (AFM) combined with a CRISPR-based chemical barcoding technique to map DNA nearly as accurately as DNA sequencing while processing large sections of the genome at a much faster rate. What’s more—the technology can be powered by parts found in your run-of-the-mill DVD player.

The human genome is made up of billions of DNA base pairs. Unraveled, it stretches to a length of nearly six feet long. When cells divide, they must make a copy of their DNA for the new cell. However, sometimes various sections of the DNA are copied incorrectly or pasted together at the wrong location, leading to genetic mutations that cause diseases such as cancer. DNA sequencing is so precise that it can analyze individual base pairs of DNA. But in order to analyze large sections of the genome to find genetic mutations, technicians must determine millions of tiny sequences and then piece them together with computer software. In contrast, biomedical imaging techniques such as fluorescence in situ hybridization (FISH) can only analyze DNA at a resolution of several hundred thousand base pairs.

Reed’s new high-speed AFM method can map DNA to a resolution of tens of base pairs while creating images up to a million base pairs in size. And it does it using a fraction of the amount of specimen required for DNA sequencing.

“DNA sequencing is a powerful tool, but it is still quite expensive and has several technological and functional limitations that make it difficult to map large areas of the genome efficiently and accurately,” says Jason Reed, Ph.D., principal investigator on the study. Reed is a member of the Cancer Molecular Genetics research program at VCU Massey Cancer Center and an associate professor in the Department of Physics at the VCU College of Humanities and Sciences. “Our approach bridges the gap between DNA sequencing and other physical mapping techniques that lack resolution. It can be used as a stand-alone method or it can complement DNA sequencing by reducing complexity and error when piecing together the small bits of genome analyzed during the sequencing process.”

IBM scientists made headlines in 1989 when they developed AFM technology and used a related technique to rearrange molecules at the atomic level to spell out “IBM.” AFM achieves this level of detail by using a microscopic stylus—similar to a needle on a record player— that barely makes contact with the surface of the material being studied. The interaction between the stylus and the molecules creates the image. However, traditional AFM is too slow for medical applications and so it is primarily used by engineers in materials science.

“Our device works in the same fashion as AFM but we move the sample past the stylus at a much greater velocity and use optical instruments to detect the interaction between the stylus and the molecules. We can achieve the same level of detail as traditional AFM but can process material more than a thousand times faster,” says Reed, whose team proved the technology can be mainstreamed by using optical equipment found in DVD players. “High-speed AFM is ideally suited for some medical applications as it can process materials quickly and provide hundreds of times more resolution than comparable imaging methods.”

Increasing the speed of AFM was just one hurdle Reed and his colleagues had to overcome. In order to actually identify genetic mutations in DNA, they had to develop a way to place markers or labels on the surface of the DNA molecules so they could recognize patterns and irregularities. An ingenious chemical barcoding solution was developed using a form of CRISPR technology.

CRISPR has made a lot of headlines recently in regard to gene editing. CRISPR is an enzyme that scientists have been able to “program” using targeting RNA in order to cut DNA at precise locations that the cell then repairs on its own. Reed’s team altered the chemical reaction conditions of the CRISPR enzyme so that it only sticks to the DNA and does not actually cut it.

“Because the CRISPR enzyme is a protein that’s physically bigger than the DNA molecule, it’s perfect for this barcoding application,” says Reed. “We were amazed to discover this method is nearly 90 percent efficient at bonding to the DNA molecules. And because it’s easy to see the CRISPR proteins, you can spot genetic mutations among the patterns in DNA.”

To demonstrate the technique’s effectiveness, the researchers mapped genetic translocations present in lymph node biopsies of lymphoma patients. Translocations occur when one section of the DNA gets copied and pasted to the wrong place in the genome. They are especially prevalent in blood cancers such as lymphoma but occur in other cancers as well.

While there are many potential uses for this technology, Reed and his team are focusing on medical applications. They are currently developing software based on existing algorithms that can analyze patterns in sections of DNA up to and over a million base pairs in size. Once completed, it would not be hard to imagine this shoe-box-sized instrument in pathology labs assisting in the diagnosis and treatment of diseases linked to genetic mutations.

About VCU Massey Cancer Center
VCU Massey Cancer Center is among the top 4 percent of cancer centers in the country to be designated by the National Cancer Institute to lead and shape America’s cancer research efforts. Working with all kinds of cancers, Massey conducts every form of cancer research, including basic science, translational, clinical and population sciences research; provides state-of-the-art cancer treatments and cutting-edge clinical trials; serves as a vital resource for oncology education, teaching and training; and promotes cancer prevention. Since 1974, Massey has been an internationally recognized center of excellence. Massey provides award-winning cancer care at multiple sites throughout Virginia by leading cancer sub-specialists and offers one of the largest selections of cancer clinical trials as well as a statewide network that brings trials to communities across the commonwealth. Its 1,000-plus researchers, clinicians and staff members are dedicated to improving the quality of human life by discovering, developing, delivering and teaching effective means to prevent, detect, treat and ultimately cure cancer. Visit Massey online at masseycancercenter.org or call 877-4-MASSEY for more information.