New imaging technique may lead to improved functionality of devices such as PCs, smartphones 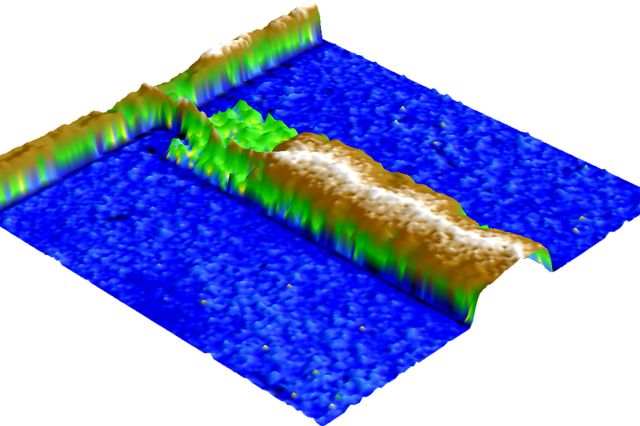 The chips that drive everyday electronic gadgets such as personal computers and smartphones are made in semiconductor fabrication plants. These plants employ powerful transmission electron microscopes. While they can see physical structures smaller than a billionth of a meter, these microscopes have no way of seeing the electronic activity that makes the devices function.

That may soon change, thanks to a new imaging technique developed by UCLA and University of Southern California researchers. This advance may enable scientists and engineers to watch and understand the electronic activity inside working devices, and ultimately improve their functionality.

The study, which was published online in Physical Review Applied, was led by Chris Regan, UCLA professor of physics and astronomy and a member of the California NanoSystems Institute.

The new method shows details that traditional approaches with electron microscopes do not capture, while also revealing electronic states within a sample — previously impossible using such microscopes.

“Of course you’d rather look at live devices,” Regan said. “We want to see what makes a device alive in an electronic sense, and standard techniques can’t.”

An electronic device can be compared to the human brain. The brain is commonly photographed via X-rays, which give a precise picture of its physical structure.

“There’s a lot of very subtle physics and chemistry happening in your brain, and if you took a picture, you wouldn’t see any of it,” Regan said. “The picture misses some very dramatic things that make your brain an interesting place.”

The technique that he and his team created is less like X-ray imaging, and more like the functional MRI — or fMRI — tests that neuroscientists use to track blood flow within the brain.

“With the fMRI, you can see the parts light up that are being used,” Regan said. “That gives you some insight into how the brain is working. Similarly, our technique allows you to see things that change as an electronic device functions.”

Electron microscopes use beams of electrons to help scientists “see” an object. In this study, the researchers paired a scanning transmission electron microscope, or STEM, and electron-beam induced current imaging, known as EBIC imaging.

EBIC imaging uses an amplifier to measure the electrical current in a sample exposed to a microscope’s electron beam. This technique, first demonstrated in the 1960s, is useful for showing the electric field built into certain devices like solar cells. But in this case, the researchers looked at devices that lacked built-in electrical fields.

Acquiring both the standard scanning microscope images and EBIC images, the researchers examined a simple pair of electrodes. The EBIC images produced previously unseen resolution and contrast. This method showed which electrode was receiving current, and even produced a detailed map of the electrodes’ conductivity.

“When we started developing this technique, we were looking at samples where there’s a very subtle physical change but a huge electronic change,” said William Hubbard, a postdoctoral fellow in Regan’s lab and first author of the study. “We saw really interesting contrast that you can’t get any other way.”

To understand the mechanism at work, the team used two amplifiers to record two EBIC measurements — another innovation — and found that EBIC imaging was picking up weak signals from secondary electrons. This sensitivity allowed them to visualize not just where electrons are, but where they are not — fundamental elements of the flow of current in a chip.

The richness of the data surprised even the researchers when they first applied the technique.

“We saw something very unexpected that made us incredibly excited,” Hubbard said. “So I’d say it worked better than we expected.”

Producing sample slices thin enough for imaging with transmission electron microscopy makes contemporary chips inoperable. But, as components become smaller and thinner over time, this research may open up new possibilities for understanding what happens inside the consumer devices of the future.

Additional study authors were Ho Leung Chan of UCLA and Matthew Mecklenburg of the University of Southern California.