October 29, 2018 | Two-cells-in-one combo could be platform to bolster leukemia treatment 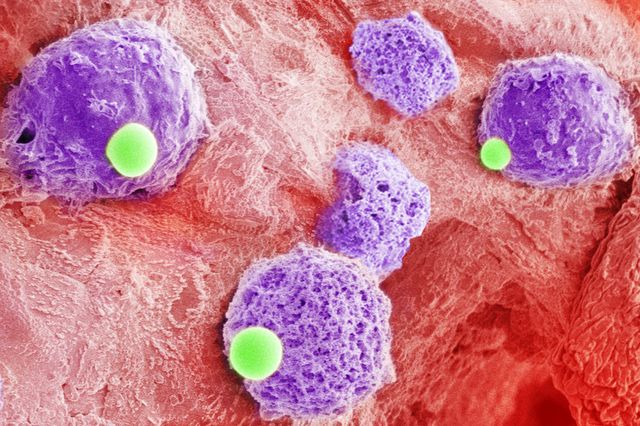 Researchers led by a UCLA bioengineer have developed a therapy — based on two types of cells joined into a single unit — that could help strengthen existing treatments for acute myeloid leukemia. One of the cells is a blood platelet that carries a drug that attacks cancer cells; the other is a stem cell that guides the platelet into bone marrow, the spongy tissue inside bone where new blood cells are made and where leukemia begins.

The researchers found that when injected into mice that had acute myeloid leukemia, the combination therapy halted the disease from developing any further. Of the mice that received the treatment, 87.5 percent were cured by 80 days after the combination cells were injected. Those mice also were all resistant to leukemia cells that were re-injected two months after the 80-day period.

The study was published in Nature Biomedical Engineering.

Zhen Gu, a professor of bioengineering at the UCLA Samueli School of Engineering who led the study, said the approach could be used in concert with other therapies, such as chemotherapy and stem cell treatment, to improve their effectiveness. Gu said the approach would have to be tested in human clinical trials and then approved for use before it could be incorporated in treatments for people with leukemia.

Acute myeloid leukemia is a cancer that starts in bone marrow and affects the precursor stem cells to white blood cells, which are a key part of the immune system. The cancer can spread to the bloodstream and other parts of the body. With a compromised immune system, a person with this type of leukemia could die from complications from other diseases.

As a treatment for leukemia, chemotherapy on its own is only moderately effective: It fails to go into remission in about 1 in 3 patients following chemotherapy, according to the American Cancer Society. And about half of people with disease who do experience remission initially may have a relapse — typically within two years after treatment — usually because some cancer cells can take shelter in bone marrow, where the chemotherapy can’t reach them.

The UCLA-led research aimed to solve that problem by devising a method to deliver medicine directly into the bone marrow. Their approach, which they termed “cell combination drug delivery,” is the first to link two different cells together for therapeutic purposes.

In the combined cells, the blood platelets are used to deliver immunotherapy drugs called checkpoint inhibitors (the UCLA researchers used a drug called an aPD-1 antibody), which seeks out cancer cells and neutralize their defenses. Once that happens, the body’s immune system can “see” and destroy the cancer cells.

“This part of the cell combination is like a delivery truck,” Gu said. “We can package medicines or immune system boosters on the cell surface of platelets, and have them activated to unload once at the target site inside the body.”

“The hematopoietic stem cells are like a homing signal to the bone marrow,” said Quanyin Hu, a lead author of the paper and former doctoral student in Gu’s research group. “Once the stem cells guide the combo cells into the marrow, the platelets can be activated. They release immunotherapy cargoes inside the marrow to facilitate the body’s own defenses, in this case T cells, to kill leukemia cells.”

The researchers plan to continue studying the approach as a potential therapy for leukemia and other diseases.

Gu also has UCLA affiliations with the California NanoSystems Institute, the Jonsson Comprehensive Cancer Center and the Center for Minimally Invasive Therapeutics.

The other authors of the study include students and research scientists from UCLA and from China’s Fudan University and South China University of Technology.

The research was supported by funding from UCLA; the University of North Carolina, Chapel Hill and North Carolina State University, where Gu was previously a faculty member; and a Sloan Research Fellowship.