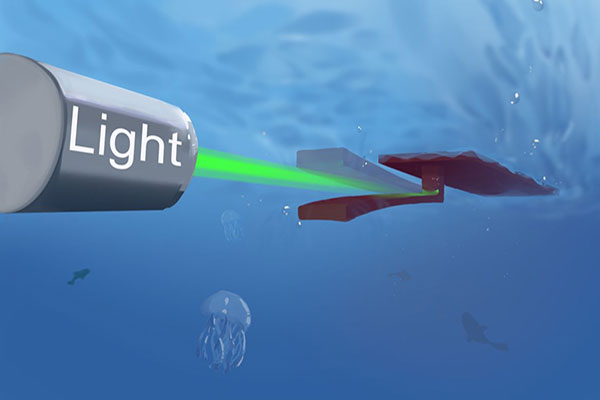 The robot’s tail flapped 35 times per minute, enough to move OsciBot 1.15 times its body length per minute — about twice as fast as comparable robots that are powered by intermittent light. (photo credit: Yusen Zhao and Ximin He/UCLA)

This article was originaly published by the UCLA Newsroom

In a paper in Science Robotics, materials scientists from the UCLA Samueli School of Engineering describe a new design for a swimming robot that’s both powered and steered by constant light.

The device, called OsciBot because it moves by oscillating its tail, could eventually lead to designs for oceangoing robots and autonomous ships. Its design is inspired by a natural phenomenon called phototaxis — movement toward or away from a light source — that is found throughout the animal kingdom. Both jellyfish and moths, for example, are attracted to light.

OsciBot demonstrates that moving by oscillation can be directly powered constant light, rather than relying on light energy that has been harvested and stored in a battery. It’s made entirely of a soft material called a hydrogel that swells when placed in water and is responsive to light. The device does not require batteries or need to be tethered to another power source.

The researchers’ first goal was to determine whether they could create a new way to use a constant energy source to get an object to move in an oscillating pattern.

To do that, they built a 2-centimeter-long flexible cylinder and anchored it to the bottom of a water tank. When they directed a beam of light at the cylinder, they found that the light made it bend as fast as 66 times per minute — and that by moving the position of the light source, they could direct the device to bend both left and right and up and down.

The researchers also determined that the speed at which the device oscillates can be adjusted based on the cylinder’s length and thickness as well as how much light is used.

Armed with an understanding of how to create the oscillating motion, the team used the same hydrogel to build a robot shaped like a rectangular surfboard, with an extended underwater tail.

When light from a laser hits a spot on the tail, that spot heats up. The slight increase in temperature causes that part of the robot to eject some of its water and shrink in volume, which moves the tail toward the light source. After it moves up, the tail creates a shadow that cools the section where the laser originally made contact with the robot, which causes the tail to descend again.

As long as light hits the target spot, the process repeats, creating a flapping motion. Researchers observed the tail flapping 35 times per minute, fast enough to move the robot 1.15 times its body length per minute — or about twice as fast as comparable robots that are powered by intermittent light.

“Typically, generating oscillation relies on intermittent energy input, such as pulsed light or alternating electric current,” said Ximin He, a UCLA assistant professor of materials science and engineering, and the study’s principal investigator. “By contrast, this study shows a new way of generating oscillation, by using a constant energy input that is easily accessible from the ambient environment and inexpensive to harness.”

The researchers also found that by repositioning the light, they could steer the robot around slight bends, showing that light can also be used to maneuver the device. 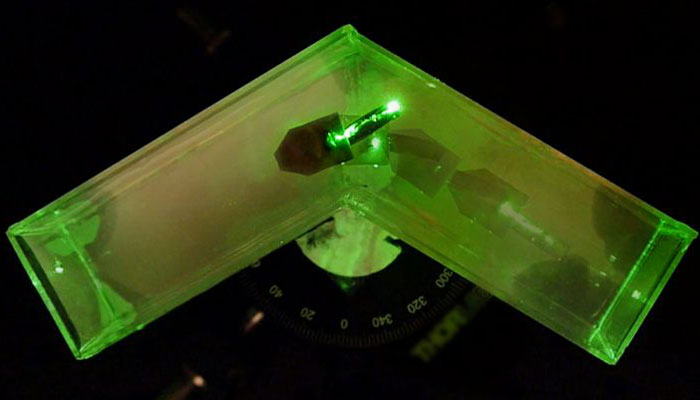 “This is really a fundamental demonstration that direct and constant light can power and determine movement,” said the study’s lead author, Yusen Zhao, a UCLA doctoral student in materials science and engineering. “It could be a step toward a variety of robotic designs that are untethered and powered solely by the available light in their surroundings, rather then relying on heavy batteries or power cables.”

If built on a larger scale, a similar design could eventually be used for large underwater propellers or wind sails that use sunlight to maneuver; at microscopic sizes, the approach could be used to develop a robot that performs precision surgical procedures. (In that case, the light could come from a separate medical instrument.) Engineers could also tweak the design for speed and maneuverability.

“The beauty of the gel-based photo-oscillator is its design simplicity,” He said. “The interplay between the ‘smart’ soft material and the environmental light enabled its self-regulated motion.”

He said the design could adapted to use other forms of energy — acoustic waves, or electronic or magnetic signals, for example.

He also is a member of the California NanoSystems Institute at UCLA. Other UCLA authors are former postdoctoral scholars Chen Xuan and Xiaoshi Qian; graduate students Yousif Alsaid and Mutian Hua; and Lihua Jin, an assistant professor of mechanical and aerospace engineering.

The study was supported by the Office of Naval Research, the U.S. Air Force Office of Scientific Research and the Hellman Fellows Fund. Zhao and He have filed for a patent for the photo-oscillation technology.