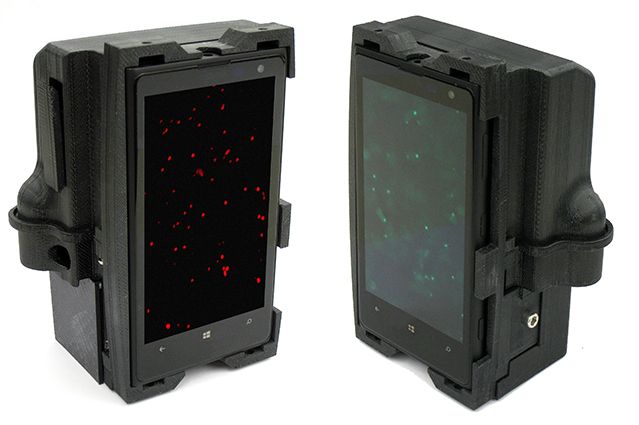 Ozcan said the new device could be manufactured for much less than $500 each if it were produced in large quantities — far less expensive than the equipment labs use to conduct the tests today. “A typical microscope with multiple imaging modes would cost around $10,000, whereas higher-end versions, such as the one we used to validate our mobile-phone microscope, would go for $50,000 or more,” he said.

Scientists identify cancer cells in part by their shape and other physical characteristics, or morphology. But determining optimal treatments for cancer requires supplementing that information with molecular diagnostics, which can help scientists identify the genetic mutations that cause the tumor. “It’s very important to have these molecular testing approaches at a doctor’s office or where care is being given,” Nilsson said. “Oftentimes, advanced lab-based testing is performed at major hospitals, which is limiting, as not everyone has access to a hospital that can perform these tests.”

“Ultra–low-cost DNA sequencing and tumor biopsy analysis, in which morphology and mutation analysis are combined, can substantially decrease diagnostic costs and make it more widely accessible,” Kühnemund said.
Wei added that the platform could eventually also be used to identify disease-causing bacteria and microorganisms, and to measure the genetic signatures of antibiotic resistance.